“France succumbed to Twitter” – this is today’s headline in one of the most popular French newspaper “Le Parisien”. Two million French are using Twitter as of today. This number is nothing compared to the true success of Facebook on the French soil. Half (!) of the population in France are using the biggest social network in the world. 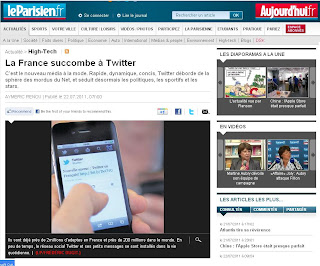 The success of social media in France is undoubted. In addition to the global networks, like Twitter and Facebook, there are other networks that have rather French or European flavor and are also quite popular, to mention Daily Motion (a version of Youtube) for exchanging videos, or Viadeo (a version of LinkedIn) that is used for professional purposes.

The boom of the social media is being felt especially strong in the last few month, due to an extraordinary event that happened in Mai: the arrest of the president of IMF, Dominique Strauss-Kahn. The French media was reporting about this event in an obsessive way, only reflecting the shock that struck the public and the political class in France. But what was of particular importance in the aspect of social media is that the first to report about the event was a french student who tweeted the information on his personal account.

The sudden explosion of interest for Twitter was unprecedented. All major newspapers provided Twitter’s user guide, as if inviting their readers to follow the reports about the DSK affair on Twitter. Needless to say, most of the French journalists covering this affair in New York were tweeting about it on their personal accounts! This trend, however, was not met with much enthusiasm on the part of the traditional media. Some of them, like TV channel Canal+ asked their correspondents to stop tweeting. The Web 2.0 revolution is in full swing in France. But what about Gov 2.0 of the French Government? It’s true that many politicians opened Facebook and Twitter accounts. The President of the Republic, Nicolas Sarkozy, has the bigger number of fans on his Facebook page than any other European leader. And even Martin Aubry from the Socialist Party, his probable rival in the next elections, who was quoted saying: “Facebook et Twitter, j’ai horreur de ca” (Facebook and Twitter, I’am horrified by it), recently opened her Twitter account.

However all these examples don’t change the reality. One of the French experts of social media whom I met recently, put it this way: “There is no Gov 2.0 in France. It’s still Gov 1.0”. Unfortunately, the french ministries (with some rare exceptions), state and public employees, representatives of local government still haven’t discovered Gov 2.0 – the idea that the modern government could – and even should – use the social media to improve its services and to have direct dialogue with citizens. The idea that social media could be incorporated into the functioning of the government is far from being explored and conceptualized. One of the rare examples is the French Ministry of Foreign Affairs that opened an official Twitter account. However, I’ve never seen french diplomats tweeting for professional purposes. 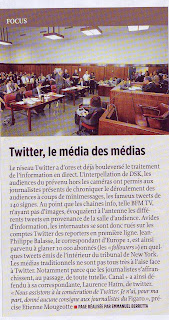 What is the reason for this reticent attitude of the government towards social media? From the meetings with my colleagues, diplomats from other European countries, I learned that this attitude exists in other countries as well. At the bottom line, there is a fear of loosing control over official information when state and public employees will enter the social media. These concerns are common for all state bureaucracies, however it doesn’t prevent many countries to allow and even encourage Gov 2.0, like in USA, Canada, UK and Australia, Japan and Israel. It looks like in most of the Europe there exist cultural barrier which is very difficult to overcome.

This difference in a mindset was felt during the last G-8 summit in May, that was hold in France, the current president of the Club. The French presidency invited to the forum the most important players of social media, among them Marc Zuckerberg and Eric Schmidt. While the French President highlighted in his speech the need of more control of the governments over the Internet, his invitees tended to stress the dangers of the excessive regulation, and repeated their conviction that Internet can be regulated by itself.

I think that the states can have some limited role in regulation of the Internet or social media. However, what is more important is that Governments will play its role not as a regulator, but as an active participant in the social media. Governments should be present there and conduct direct dialogue with their citizens. The time of one-way communication is over: the governments must join Web 2.0. This idea is called Gov 2.0. If it doesn’t sound well in French, we can think about better translation.