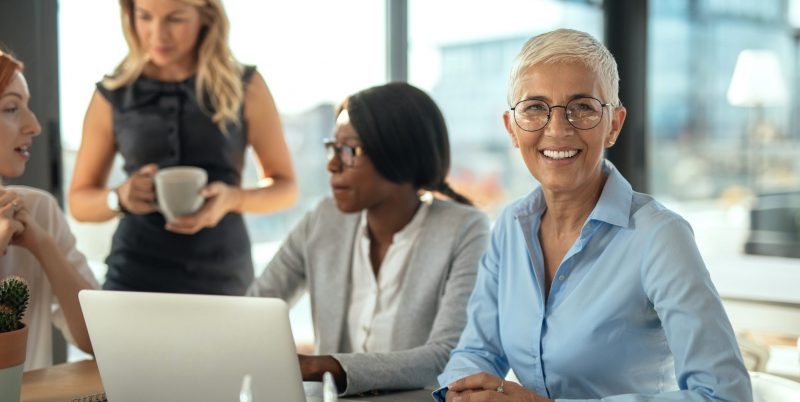 The workplace is an ever-evolving entity. The biggest change in recent years has been the overall increase in age diversity within offices across the nation. Age diversity refers to the idea that many organizations now consist of employees born in multiple generations, such as Baby Boomers to Generation Z.

This is because older employees are now more susceptible to working later in life due to growing economic and personal concerns that were not as evident in years prior. Some who are qualified to retire cannot for reasons such as not having enough saved enough for retirement, needing extra income to cover rising health care costs and avoiding a decreased social life post-retirement.

The Bureau of Labor Statistics projects that by 2024, employees between ages 65 and 74 will increase by about 55%. In the same year, employees 75 years and older are expected to increase by 86%. The growing work span has resulted in seasoned employees maintaining their managerial roles for longer periods of time.

Younger employees are somewhat displeased with this reality. A survey conducted by the Associated Press NORC Center for Public Affairs revealed a third of employees under the age of 50 felt that age diversity had negatively impacted their career and put them at a disadvantage in the workplace. Young professionals typically viewed that senior employees’ later retirements meant they would not attain executive positions until later in their careers as well. In addition, those who were able to obtain managerial positions at a younger age were more likely to be seen as untrustworthy among older co-workers due to their limited professional experience.

Many researchers have conducted studies to determine if younger employees are well-suited for executive roles. Studies, such as the one by Harvard Business Review featured in Forbes, found that younger employees were better suited for management positions because they possess qualities that can help run a business more effectively.

For instance, the survey revealed that younger managers were able to adapt more quickly to major changes within the company. They were also better at motivating their teams to produce quality work and more receptive to feedback than older supervisors. Forbes also mentioned that younger managers tended to continuously look for ways to improve their work ethic and were more results-based than older managers. The article stressed the importance of attaining more young managers in the workplace because they provide opportunities for companies to advance in their overall performance and productivity.

Another study conducted by the MIT Sloan Management Review co-signed the findings above by concluding that younger managers were more self-driven and career-oriented. They tended to focus more on the company’s specific needs and gravitated towards analytical methods to help effectively manage their teams. They did not tend to look at the full picture when addressing the company’s issues but always gave their undivided attention to each task at hand. These are great characteristics to have in managerial positions because they help others view leaders as reliable assets in the company. It influences the idea that younger managers consistently try to innovate new ways to improve the organization’s functionality.

However, one huge flaw discovered in younger managers was that they tend to lack essential soft skills needed to become effective leaders at work. Soft skills are character traits that help shape a person’s behavior. These skills are what separate humans from robots because they help people convey emotion and show empathy towards others.

Unlike technical skills, soft skills are not taught in school. Instead, they are developed over time through years of personal and professional experiences. The survey found that older managers tend to rely more on soft skills in the workplace because those characteristics helped them build a great rapport with their team. Furthermore, they found that older managers typically focused more on their employees’ needs rather than their own and used more intuitive techniques to help effectively manage the workplace. Older managers were also more prone to take on a maternal or paternal role within the office and look at the whole picture when trying to maintain the company’s productivity.

How Young Managers Can Evolve in the Workplace

The survey conducted by the MIT Sloan Management Review revealed that the most effective managers always helped others produce their best work. Meaning, younger supervisors should rely equally on soft skills and academic methodologies to help improve their organizational techniques. For instance, developing soft skills allows managers to develop a deep awareness for their employees’ strengths, weaknesses and expectations. This will benefit leaders when it is time to delegate daily tasks among their team. Lastly, utilizing soft skills could help influence more companies to agree that younger employees can be well-suited for managerial positions when combined with their eagerness to lead.

Briana Richardson-Jones serves as a Justice Department (DOJ) program analyst. Before becoming a federal employee, she pursued a Bachelor of Arts in English and a Master’s of Science in criminology with a public policy concentration. She believes she can help prospective and new employees navigate government efficiently while currently doing the same. Briana has discovered creative tips that can help others “work smarter” in the future. She also plans on combining her love for writing and criminal justice to educate readers about current events and community issues affecting people worldwide.

Transition on My Mind: What I’m Doing to Prepare

The Easiest Way to Encourage and Support Others: Use Your Words