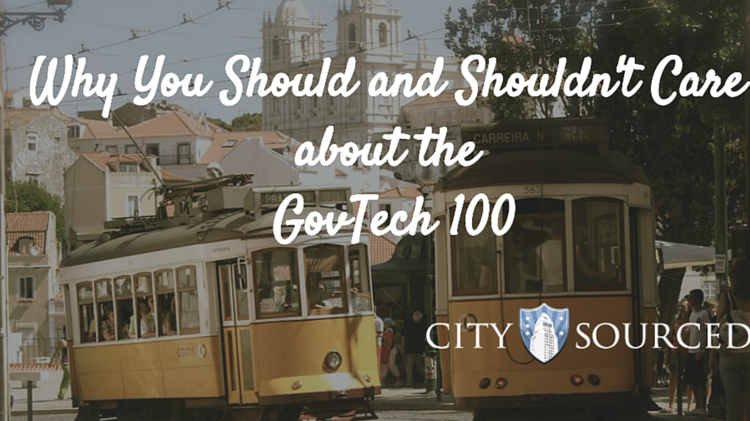 The editors of Government Technology together with e.Republic Labs, a sister organization focused on civic innovation and new market entrants, recently announced the inaugural GovTech100. In their words it is

a listing of the leading 100 companies focused on government as a customer, having developed an innovative or disruptive offering to improve or transform government, or having created new models for delivering services.

Note: Before I go any further, let me say that yes CitySourced was listed, and of course this post could have a self-congratulatory tone. We wouldn’t be writing this if we hadn’t been included, but I’m not here to write about CitySourced or any one Civic Tech company. Instead, I want to explore want the announcement says about the broader civic tech space.

Why You Should Care

The Explosion of Civic Tech

It’s no secret that civic tech has often been overlooked by the mainstream dotcom circles. But, the tide is changing. New, innovative startups are propping up at a rapid pace.

In 2014, Paul Graham, co-founder of one of Silicon Valley’s most successful accelerators, Y Combinator, included government-focused technology ventures in their annual “request for startups. Further, the public sector was projected to have spent $6.4B on civic tech in 2015.

GovTech100 is a continuation of the phenomenon of civic tech going mainstream.

The GovTech100 list is filled with software platforms, which demonstrate, that government is catching up to the trends seen throughout other enterprise IT organizations. Technology is no longer dominated by isolated, stand-alone software that is maintained in-house.

In addition, you see that the public sector is moving away from consultants building one-off projects and moving towards standardized technology platforms that can be customized for each organizations’ particular use case. This shift is powerful and signals that there is greater opportunity for shared technology models that innovate quicker and deliver services at a lower price point.

Note: We’re grateful that GovTech and many more organizations are putting a spotlight on civic tech.

The concept alone that you could have 100 companies focused solely on civic tech is exciting. It’s an affirmation that technology is permeating the public sector. But, civic technology isn’t a new concept. Technology players have been working in this space for decades. For example, Esri, one of the 100 announced, a geospatial platform was founded in 1969 and is part of the original pioneers government technologies.

But, the list is missing some significant civc tech software companies. Cartegraph, Cityworks, SunGard Public Sector, and Salesforce, are just a few companies that power much of the critical back-office work that makes cities function. Collectively, these companies are worth billions of dollars! Many of the companies listed on the GovTech100 would trade their spot for a fraction of that revenue.

Receiving PR and recognition feels good! It provides a fun moment to high five another and throw every congratulatory emoji on your team Slack channel. Plus, the recognition also helps to raise awareness and spread the idea of the opportunity in civic tech, all of which helps to further attract talent and interest.

But, PR doesn’t measure the value, at least in the sense that we think about it at CitySourced, which is the value resonating back to the customers or communities we serve. Further, it doesn’t drive innovation, it doesn’t help extend more services to local residents, and it doesn’t say anything about the return on investment our local cities experiencing by working with new technologies.

There’s a lot to be happy about and the GovTech 100 celebrates the civic tech space. Spending is up, the field is growing, cloud is seeing adoption, and a ‘best-of-bread’ approach is gaining traction. We should all give ourselves a little pat on the pack.

But, there’s also lots of work to do.