Up front: The Forest Service ostensibly tells the public not to comment

Soliciting public comment is a challenge. There are some topics that just attract the public’s attention — building a Death Star or making marijuana legal… or the FCC’s net neutrality proposal, which has received some 1 million comments.

The U.S. Forest Service is getting taking heat for forcing the media to pay for a permit and get permission before shooting a photo or video in federally designated wilderness areas.

Under rules being finalized in November, a reporter who met a biologist, wildlife advocate or whistleblower alleging neglect in 36 million acres of wilderness would first need special approval to shoot photos or videos even on an iPhone.

Personally, I find the rule reprehensible — what is “media” these days anyway? And nearly as bad is the defense of the rule by Liz Close, the Forest Service’s acting wilderness director, who comes off as arrogant — rather than using this as an opportunity to build the Forest Service and public service, she falls back on specious statements.

“It’s not a problem, it’s a responsibility,” she said. “We have to follow the statutory requirements.” 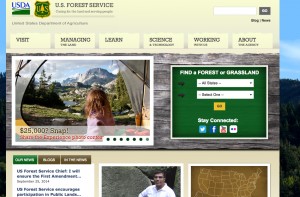 The rule is gaining more attention. Esquire wrote about it under the headline: The U.S. Forest Service Wants to Fine You $1,000 for Taking Pictures in the Forest.

And it is more than ironic that the Forest Service Web page features a contest to take photos and ‘share the experience.’

But the teachable moment for all agencies is the notice seeking comments posted in the Federal Register earlier this month. Here is the summary:

The Forest Service proposes to incorporate interim directive (ID) 2709.11-2013.1 into Forest Service Handbook (FSH) 2709.11, chapter 40 to make permanent guidance for the evaluation of proposals for still photography and commercial filming on National Forest System Lands. The proposed amendment would address the establishment of consistent national criteria to evaluate requests for special use permits on National Forest System (NFS) lands. Specifically, this policy provides the criteria used to evaluate request for special use permits related to still photography and commercial filming in congressionally designated wilderness areas. Public comment is invited and will be considered in the development of the final directive.

I know what each of those words mean individually. Together, to quote a John Oliver joke, it just seems like they put a dictionary in the washing machine that this was the result. It is a bureaucratic mess that hides what they want to do.

In fact, in the Federal Register notice under the section labeled “background and need for proposed directive,” the Forest Service says:

The proposed directive is necessary for the Forest Service to issue and administer special use authorizations that will allow the public to use and occupy National Forest System (NFS) lands for still photography and commercial filming in wilderness. The proposed directive FSH 2709.11, chapter 40, is currently issued as the third consecutive interim directive (ID) which is set to expire in October 2014. The previous directive addressed still photography in wilderness and did not provide adequate guidance to review commercial filming in wilderness permit proposals. The notice and comments are collected and used by Forest Service officials, unless otherwise noted, to ensure the use of NFS lands are authorized, in the public interest, and compatible with the Agency’s mission and/or record authorization of use granted by appropriate Forest Service officials.

I get the restrictions on agencies and government organizations. But I don’t think any of the rules push this, which seems to define nonsense. The Forest Service essentially decided to make the fine print the heart of its post.

But the most distressing part of this is the sense that ‘I have the answers and I don’t really care what you think.’

This is treating public comments as an afterthought… as a requirement… not as an opportunity to help the government do its job better.

This is baloney! I hope the Forest Service can be stopped.

[…] Additional information from GovLoop’s DorobekINSDIER:  The Forest Service ostensibly tells the public not to comment […]

A New Kind of Contracting?

Learning to Say No to Work!