Kirit Amin, one of the seasoned guard of federal government technology executives and currently the chief information officer at the International Trade Commission, will retire for government, he confirmed to the DorobekINSIDER. He will be stepping down at the end of the year. 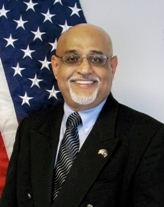 The departure is the latest to a growing list of CIOs who have left government in recent months amid a time of broad upheaval among federal agencies.

Recently, Amin has been passionate about the importance of the smaller government agencies, which, he argues, are largely overlooked.

And, an aside, I will be talking to Amin about his career when he joins me for GovLoop’s DorobekINSIDER LIVE on Wednesday, December 13 at 2p ET. He will also be speaking at the December luncheon of the Association of Federal Information Resource Managers (AFFIRM), which I will be moderating.

Kirit Amin was named US International Trade Commission (USITC) , Chief Information Officer (CIO) in December 2014. He works directly for the Board of Commissioners and has already mapped out the Data Center, Cloud and shared services strategy as well as the roadmap for the modernization of the commission’s IT infrastructure and mission-critical systems.

Kirit was the U.S. Department of Commerce, Deputy Chief Information Officer and Chief Technology Officer (CTO) from November 2012 until his move to USITC in December 2014. He provided leadership and strategic technology implementation, fulfilling the CIO and Department’s IT operational mission while expanding the use of Department-wide shared services, cloud implementation, and emerging technologies.

Prior to joining the Department of Commerce, Mr. Amin served as the Chief Technology and Innovation Officer at HUD where he provided valuable leadership and vision to help define its 5 year IT Transformation initiatives, acquisition strategy for HUDNET, HUD’s next-generation Enterprise Infrastructure including WAN, Data Center and end-user functions, shared services strategy and implementation, as well as cloud strategy and implementation.

Prior to HUD, Amin was the Chief Information Officer for the Bureau of Consular Affairs (CA), for nearly five years where his leadership was instrumental in transforming the US State Department, Office of Consular Systems and Technology’s [CST] IT operations consisting of a multitude of overlapping legacy systems, to an exemplary cutting-edge IT operation, that was recognized as one of the most innovative and successful IT shops in the Federal Government. He served as a senior advisor and participant for various interagency/international groups.

During his long and successful career in the Federal IT private sector at organizations such as Nortel/PEC, Infotec, CSC etc. serving Federal Departments such as DOA, DHS, DOI, DOT, VA, DOJ, the USAF, DIA, etc.