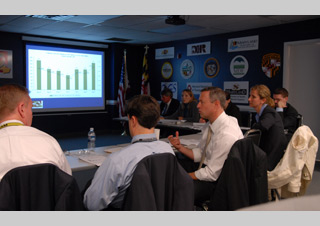 At the Esri Federal GIS Conference on February 10, 2015, former Governor Martin O’Malley delivered a motivating keynote speech on the importance of GIS technology for government leaders that want to make a lasting difference for their constituents. O’Malley has been a pioneer for geographic information systems throughout his political career. During his first two terms as mayor of Baltimore, he sought to significantly reduce crime in his city by utilizing GIS-based programs then continued utilizing mapping software while Governor of the State of Maryland

As mayor, the GIS-based program, CitiStat, was fashioned to indicate where crime was actually happening in Baltimore so police could be deployed in a more efficient manner. During O’Malley’s tenure, violent crime dropped an astonishing 40 percent. This model inspired O’Malley to create StateStat in 2007 while governor. The potential of GIS was amplified to include stimulus-spending statistics in the mapping program. These achievements emphasize the concept of sustainability while tackling large environmental issues that affect us statewide.

Programs such as BayStat and Greenprint were created to measure the restoration and conservation efforts in the Chesapeake Bay. They worked innovatively to identify sources of nutrient loading which has been spurring eutrophication in the bay. The benefits of cleaning up the bay trickled down to help alleviate ecological fishing problems as well as increase local food quality.

Not only did O’Malley highlight GIS as a necessary tool for government workers, he also called for a renewed focus on leadership in public service. He described entrepreneurship, collaboration, performance measures, and interactive experiences as necessary elements that are essential for effective leaders. GIS will be a catalyst for this monumental change in management and leadership across the government.

Public servants that take initiative and utilize their resources such as GIS in an inspired way are the most successful leaders in their department. This is how former Governor O’Malley has become one of the most influential public figures in the Untied States while paving the way for geospatial technology to enhance the impact of government projects across all sectors. We are excited to see what the future holds for GIS in the United Sates government.

Easing the Transition to XaaS