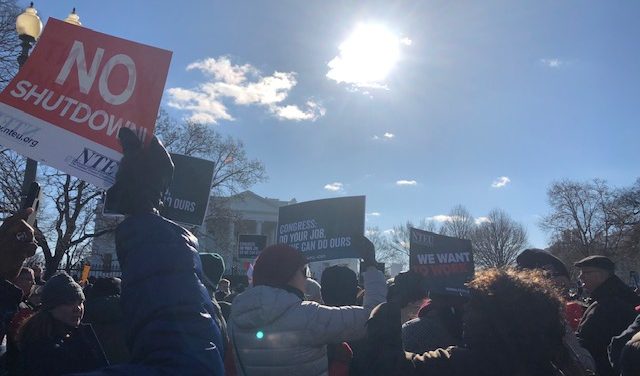 Public sentiment says that this government shutdown feels different. And it’s true. This particular shutdown, which spans the calendars of 2018 and 2019, has a catalog of unique characteristics.

After all, this shutdown threatens to reach 22 days on Jan. 12, a record for the longest shutdown. It has prompted an Oval Office address and was born from arguably an unparalleled level of vitriol that divides America’s two major political parties.

Resolving the crisis might require nothing short of President Trump declaring a state of national emergency to bypass Congress and secure funding for the construction of a southern border wall  – a central promise of his 2016 election campaign that has divided Democrats and Republicans.

And yet, as unique as many political elements of the shutdown are, life for many federal employees has been thrown into disarray.

There were three shutdowns in 2018, and as America’s two-party system has increasingly shifted toward ideological poles, shutdowns are the newest political pawn in the chess match between government legislators.

In 2013, the shutdown spanned from Oct. 1-17, with debate over the Affordable Care Act fueling the lockdown. While employees returned to work quickly and were confident that they would be repaid for time spent furloughed, many still endured the same rollercoaster of emotions that federal workers are riding out now.

GovLoop spoke with three federal employees who went through the 2013 federal shutdown and asked them to share their experiences. Here’s who they are and what they had to say.

Q: What did you go through during the shutdown? How was it draining emotionally and/or financially?

Maltby: “I think there was a lot of confusion. How long will this last? What will we do? At the time, I assumed that we would certainly get back pay.

I will say that I think one difference between then and now is that today, people are less confused and surprised because this has become more normal, which is unfortunate, but also that you no longer, especially in this political climate, can assume anything –  like that you will get back pay, that it will end quickly. I think people in general, I think the people that I’ve talked to, have less confidence that the future will be like the past, so they’re less likely to predict things. I would describe it as almost being a little numb.”

Fischer Laurie: “For me, I have a spouse who had a paycheck, so we had a way to cover our bills during that time period. For the first maybe week or so, there was frustration but also a sense of relief because you were out of work. It didn’t seem like it was going to be particularly lengthy.

The second week it got more difficult because you didn’t really know day-to-day what your schedule looked like… I think that was particularly challenging. I had to go make a car payment at a credit union and I remember seeing at least one person in the credit union trying to figure out a financial solution for paying bills during the shutdown.”

Cage: “I was in my early twenties and I think that for me I felt uncertainty… I knew that the battle was over ‘Obamacare’ and negotiations weren’t going over very well. At the time, I was a mission critical employee. My position was essential, so I knew and understood the importance of the work that I did and that I had to be there.

Financially, I relied somewhat on my parents. Thank God my parents didn’t work for the federal government; they had jobs in the private sector. I think that was my cushion. At the time, it was less about the financial impact and more about the stress or fear of the unknown. You wonder a lot. My biggest concern was: Would things balance out, and how?

I was more hopeful in 2013 because I knew five days into the shutdown, I remember Congress said that all federal employees would get back pay. It was only a partial paycheck that we missed. That wasn’t much of a hit. I think I had a rental property – me and my brother made an investment early and that was something that was helpful.”

Q: What sorts of activities did you take up to get through?

Maltby: “It sort of had to be stuff that you could do quickly, so I did some TV binge-watching, I went to the movies, I played some video games – that sort of thing.

It would’ve been nice to have more of a sense of solidarity. I think that federal employees don’t always think of themselves as a group but the rest of the world does.”

Fischer Laurie: “I largely stepped back from a lot of it… I was thinking a little bit about those people, who were working without paychecks, so I was worried about them.

The first week or so, it sort of felt like a vacation, so I did fun things like watching TV, going to the movies, reading books. Once it got to week two and it was clear that this was going to persist, it certainly got very lonely. I organized my house a lot, cleaned up things, which I think a lot of people are doing during this time if my neighborhood networks are any indication.”

Cage: “I was still working, and I was very busy. I read a lot and took time to engage with the YGL community. Sometimes groups of friends would get together after work, but for the most part, I went to the gym and went home. I remember just going business as usual.”

Q: How was finally getting back to work (or work as normal)?

Maltby: “It was definitely busy, and it definitely called upon the ability to prioritize… All the plans I made for that period were all out-of-date. So I think I spent the first day just trying to get everything back in order. The one nice thing was that I didn’t get as many emails because everyone else is furloughed too. But then, of course, everyone shows up and sends 100 emails their first day.”

Fischer Laurie: “It was relatively straightforward. I do remember going in that morning and seeing the directors and the people above them that were extremely excited that we were back in the office. They talked a lot about how lonely it was and how a lot couldn’t get done even though they wanted it to because they didn’t have the resources and the people and the knowledge base to get things done.

I think it felt more strange personally to have to go back after you had this forced separation from your work. It’s not like you took a vacation and went somewhere fun… It was a more surreal feeling to be back the first day.”

Cage: “There was somewhat of a shift in efficiency especially with regards to manpower… Things would take a little bit longer (during the shutdown). I think again, where I was working, this was stuff that had to happen.”

Q: What advice do you have for those who are in the same position now as you were then?

Maltby: “I do think that it would have been nice to have more of a sense of solidarity. Federal employees, at least in my experience, don’t always think of themselves as a group… When we go through tough things like this, sometimes we don’t always think to reach out to each other for a sense of community to get through this.

One of the things I would do would be to prepare better for the shutdown. Don’t ever do it alone… Reach out to people you know, who you work with. Maybe this is a wakeup call – if you can’t think of anyone you can talk to, that’s a sign you need to make more connections in your office or in the general federal community.”

Fischer Laurie: “I think there’s nothing great about it. The best that you can do is figure out a plan to keep yourself and your family moving forward, figuring out how to continue to live your life and use the time productively because these opportunities perhaps come along more frequently than we would like.”

Cage: “I would definitely say it’s mostly anxiety and stress. The fear of not knowing can be debilitating, however, but I think there are two ways to handle stress. You can let stress debilitate you, get you down, or you can use stress to keep you productive.

One of the biggest things for me is that there are so many people affected from so many stories, from friends who are contractors to friends that are trying to house. The role that government plays in our lives is [extensive]. My overall advice is to stay busy and create a list of gratitude.”

The State of CX in Government