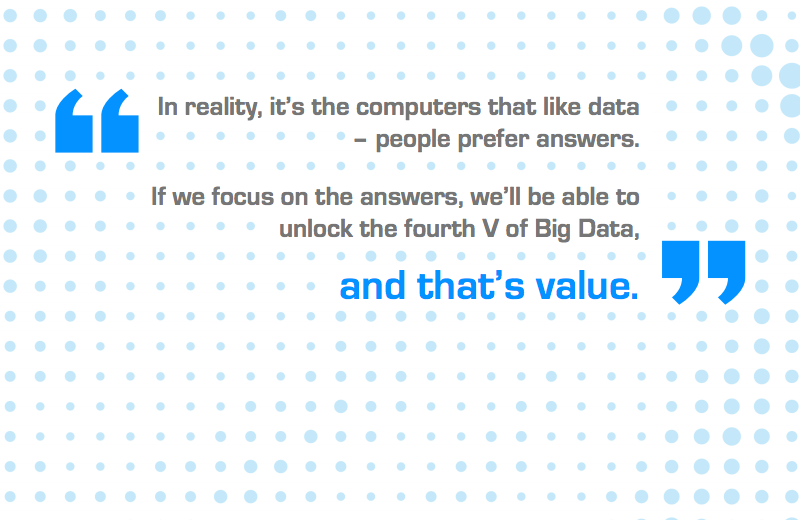 Public sector agencies at all levels are beginning to understand the enormous effect of data. With the click of a mouse, it is now possible to view the central role that data plays in government work, from the Census’s data visualization tools to data.gov, which houses over one hundred thousand unique government datasets for public consumption and private use.

We’re entering the age of ‘big data,’ in which decision-making at all levels will be powered by the enormous amount of information we produce every day. For government agencies, this data has the potential to deliver tremendous benefit for the customers they serve, including civil servants, citizens, and even other government agencies.

But how close are we to that goal? The ability to collect, store, and process the data isn’t the complete journey. Data, whether it is big, small, or somewhere in between, is only valuable when you can draw some meaningful conclusion from it.

This is the ‘last mile’ of big data – regardless of how ‘big’ your agency defines as big data. It is finding a way to actually parse out the raw data into useful nuggets that eventually inform decision-making both inside the agency, as well as those you serve.

To help public sector agencies achieve this final goal, GovLoop and Actuate have produced this industry perspective on the benefits of focusing not only on the data itself, but also on the ability to use it in a meaningful way.

“When talking about big data, we often hear about the three ‘Vs’ – volume, variety and velocity,” said Allen Bonde, VP of Product Marketing and Innovation at Actuate.

“In reality, it’s the computers that like data – people like answers,” said Bonde. “If we focus on the answers, we’ll be able to unlock what I call the fourth V of big data, and that’s ‘value.’”

Let this document serve as your guide to unlocking that value. Read the full publication here.