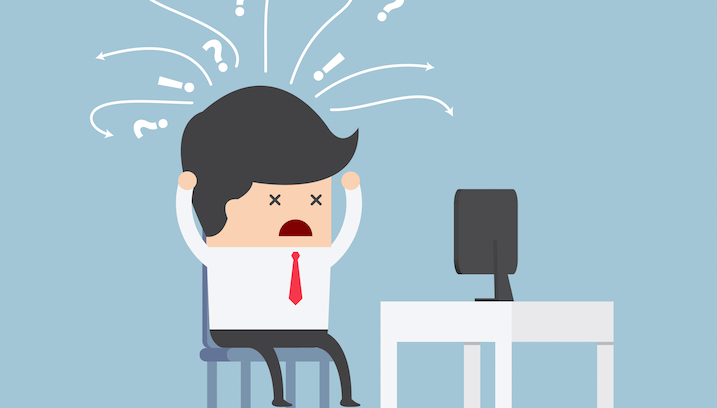 I am going to be brutally honest with you. It’s a tough time to be a federal employee. For the fourth year in a row, The Best Places to Work data showed a decline in federal employee satisfaction. The Partnership for Public Service found government-wide, federal employee job satisfaction and commitment fell 0.9 points to a score of 56.9 out of 100 — the lowest score ever. Eeek.

The rankings include the views of more than 392,700 civil servants from 389 federal organizations on a wide range of workplace topics from overall employee satisfaction and commitment, to strategic management, teamwork, leadership and work–life balance.

The numbers are a bit grim. But there are some bright spots in the data and a lot of lessons from organizations that are actually improving despite less than ideal circumstances.

David Dye, Director of Deloitte’s Human Capital Practice, helped PPS analyze the numbers. He told Chris Dorobek on the DorobekINSIDER program that the survey tells us what is actually going on in the federal workforce and provides an opportunity to look at how we can make improvements.

The surveys were compiled in the spring of 2014, just months removed from the morally devastating government shutdown and sequestration. Nevertheless the numbers show a startling trend of engagement for agencies.

One bright spot in the grim numbers is 43% of the agencies actually raised their score this year – twice as many as did last year. “I think the message is clear. If you pay attention to communication, if you actually implement improvements, good things can happen,” noted Dye. 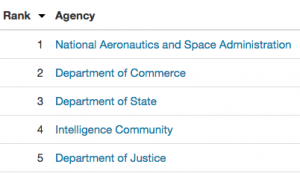 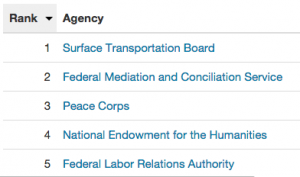 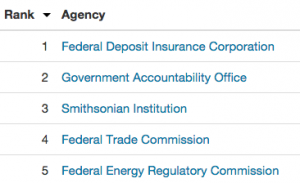 “When I look at the 19 large agencies in order, nine out of the top 10 actually increased their scores this year,” said Dye. “Unfortunately if you look at the other end, seven out of the bottom 19 agencies actually drop. If you look at the stats, agencies that are already positive are getting better, and those who have not done well, are actually getting worse. That highlights a troubling statistic.”

NASA was the most highly rated agency for the third consecutive year. “The agencies that are constantly on the top focus on the mission of the agency. They are in tune with their core philosophy. They align and support an employee’s mission in the work that they do individually. In addition, there are things these leaders are doing to communicate to their workforce about the progress they’re making, the impact various work units are having. They take the time to recognize the individual contributions of employees,” said Dye.

Agencies are now beginning to consider their brand. And the Surface Transportation Board has a brand of being a great place to work.

Another highlight is the Department of Labor. The DOL had the biggest increase for large agencies this year. “They moved up more than three points in most of the categories, particularly around leadership. Additionally, the Security and Exchange commission went up almost five points for the second straight year. On the small agency side the U.S. Trade representative went up over 19 points,” said Dye.

In addition to the categories themselves, the rankings also look at which stats have the greatest impact on that overall index. “What we’ve found is effective leadership is not only the number one driver of overall satisfaction and commitment, but it’s head and shoulders above everything else,” said Dye. “Pay is a distant third. Skills and mission match is second, but below effective leadership. If you can make improvements in effective leadership, which has a whole range of dimensions to it, I believe that there could be improvements, not only in overall ranking, but even in some of the other areas too. If leaders stay and behave in the right way then I think there’d be a lot of great improvements.”

Recently, President Obama met with the career senior executives. He announced new initiatives around a White House leadership development program. “I would say there’s more attention right now around leadership issues, around employee engagement, around workplace environment, than there has been in several years. Maybe it takes things like rankings and scores to get people to notice,” said Dye. “We have an opportunity now to really engage the top leadership and agencies. When you look at those who are doing well and continue to do well and improve, I think you’ll find by and large that the top leaders are actively involved.”

The Gov Has Some of the Best Employees

In all of the talk of bad employee satisfaction and poor leadership it is important to remember that some of the best and brightest work in government. Government workers are on the frontlines of innovation. “The NIH is working with the private sector now on an Ebola vaccine. There are a lot of important people who are having some really impactful things going on with NIH. NASA just launched the Orion Spacecraft and that is going to take us beyond our wildest dreams,” said Dye.

And even though innovation is often seen as a technology solution, it is the people that really make innovation work. “Technology is not going to run unless the people invent it and use it. The missions of agencies are not going to happen unless people contribute, “said Dye. “I’m still a believer in that it’s people who make the place, and it’s leaders who help make the people. We have got to find a way to compete in the world, compete against the private sector, and have inspiring and aspiring missions.”

[…] Interested in learning more from NASA? Check out their full report on the agency’s 2014 employee satisfaction results here. More results from the survey-at-large are also discussed in our blog, Happy to Work in Gov? Survey Says No. […]

I’ve said it here before, and I’ll say it again. Recent hires are often 6-8 points more positive on many measures than those with more than a couple of years’ tenure. Whenever there are hiring freezes, the average tenure of employees increases. So, when you have a drop in recruitment, you can expect the overall effect of that to be reflected in small drops in the aggregate result. These small changes that are eliciting dour assertions here, may be a reflection of real change in morale/climate, but they might also be a reflection of a very normal shift in who is answering the survey and how long they’ve been around.

That also applies to shifts in agency rankings stemming from small (e.g., 2%) changes in responses to key indicators. Smaller agencies are especially susceptible to that, since it doesn’t take all that many new hires to bump up their % positive on an indicator.

Be careful what you make too much of. No point in wasting energy on what may end up being sampling-related artifacts.

For those like GovLoop, Deloitte and the Partnership who don’t deeply connect engagement to inclusion, all demographic indicators in the survey decreased this year including the ones listed above and others like women, men, veterans, employees with disabilities, under 40, 40 and over, Native Hawaiians or other Pacific Islanders and multi-racial individuals.

Surprise, surprise, the only demographic group who rose in the rankings was the SES. The SES score of 81.8 outranks the rank and file employees (59.5) they lead by nearly 23 points. What does that say?

Executives are generally always more positive than rank-and-file. We get the same results here in Canada in our federal surveys.

I suspect part of it is that career opportunities form a big undercurrent in how people respond to such surveys. If you’re moving up, then more things look rosier. And in an era that presumes managers can be “generic” (i.e., transferable from any file to any other file, without necessarily having domain-specific expertise), the career opportunities for the SES (what we would call EX-group in Canada) are almost necessarily greater.

I think it is also the case that if you happen to be in the loop with respect to decisions, it’s much easier to see them as plausible and even advisable. In contrast, those who remain in the same position for years, and are not privy to the reasoning that went into decisions made at higher levels, are more likely to grumble.

That is not at all to dismiss the grumblings of the infantry, but simply to explain how and why there can be such big differences in their perceptions. They live in different worlds.

I have 35 years of government service all with IRS. I have been treated badly for the final time. I will retire the end of next year. I’m an instructional designer – a person who creates training products – and I know that the newer hires don’t have the background or education needed to do the job. I will NOT be doing an exit interview to address their knowledge management issues nor do I plan to work those 10 hours days that I used to. I’ve been beat down one time too many. I am surprised the survey results are not lower.

No one person is a leader. I beleiver we all are leaders, some are just not given the opportuntiy to lead in their skill. It still takes a team to make it work. I see a lack of team player/leader is a major issue in the government. Titles are more important than getting the job done. Serving 20 years in the military where team players are important for the mission, makes it very difficult for me to do my job without it. But, it seems less important to those in top leadrship. Just my thoughts.