Earlier this month I shared some thoughts on 5 ways to improve citizen engagement. After writing that post and all the great conversation, I decided to take a step back and reflect back on the levels of citizen engagement. I was reminded of some literature I had read by Sherry Arnstein on the various “rungs” of citizen engagement. Arnstein published the theory in 1969, and although the way that government engages with citizens has drastically changed due to changes in technology, Arnstein’s “Eight Rungs on a Ladder of Citizen Participation,” are still applicable today, and fascinating to consider.

Below is an image showing the eight rungs of citizen participation. At the bottom, Arnstein describes therapy and manipulation as forms on non-participation, followed by informing, consultation, placation, as “degree of tokenism” and finally, partnership, delegated power, citizen control as “degree of citizen power.” 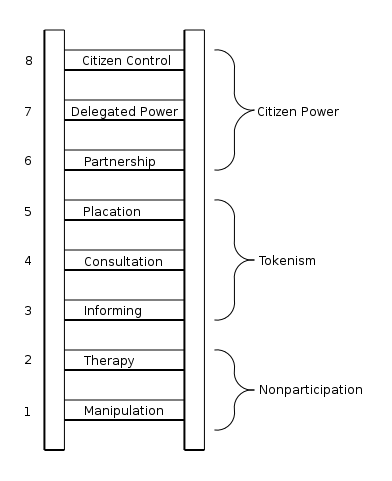 On rungs 1 and 2, Arnstein defines as manipulation and therapy as nonparticipation in terms of citizen engagement. Manipulation and therapy are used here as ways to describe government attempting to push an agenda, initiatives, or use influence to build support for an idea, in some cases not taking into consideration what is best for the community; therefore, not actually constituting genuine citizen participation.

Arnstein’s rungs 3-5, describe instances when citizens are provided access to one-way communication (informing), given surveys or have opportunities to attend hearings (consultation), or sit on planning boards with limited authority (placation). Like rungs 1 and 2, citizens are not actually given any kind of authoritative power by government, and although citizen participation is occurring at a higher level, it is still not completely genuine in terms of engagement.

Rungs 6-8 are examples of when power is shared by government and citizens, equal representation on boards with decision making authority (partnerships), real authority to make decisions in community (delegated power) and the highest rung in which residents hold final authority of decisions (citizen control).

The steps are really interesting to consider, and put into context why often a citizen engagement initiatives may fail. When citizens are aware that the engagement initiatives are occurring on the lowest rungs, they have every right to lose trust in government, and not see government as representative to their needs as citizens. To build upon my previous post, How Can We Improve Citizen Engagement Initiatives? Here’s 5 Ways, one way to climb up the rungs of the citizen engagement ladder is for agencies to create and use multiple channels of communication. By doing so, agencies can work to improve the reach, effectiveness, and efficiency of their communications programs. Further, multiple channels allow agencies to build trust, support, and show accountability for actions.

A multi-channel approach means leveraging a variety of digital and traditional channels to maximize reach and awareness for citizens. There is social media, email, telephone, fax, and the mail. With all these different kinds of channels, government needs to think very carefully on how to best engage, reach the broadest audience, and share important resources to inform citizens how to engage with government. To fully leverage all these tools, agencies must focus on the right data, metrics, and use cases to know that the strategy is working – and they are helping to improve the quality of service provided to citizens.

Arnstein’s literature is an interesting look at citizen engagement. What became clear is that when I was reading the essay, elements of generational differences became pretty apparent, as Arnstein seems to suggest that citizens and bureaucrats are placed at odds, and are battling over power. Yet, today, the way government engages with citizens is radically different than it was in the 1960’s. The efforts for a more collaborative and transparent government have shifted how government engages with citizens, and has allowed government and citizens to work cooperatively to improve services. This is clearly represented with efforts to have a two-way discussion with citizens through a multi-channel approach. With that being said, I do believe that Arnstein’s ladder has significant value for the way we define citizen participation, and is a great starting point for our discussion on citizen engagement.

How does government improve engagement and move up the ladder to steps of partnership, delegated power and citizen control? Should government?

Thanks for another helpful and instructive post, Pat. Awesome analysis and insights, as always!

Thanks for this, Pat. There’s a great group out there with a powerful methodology for results based community engagement. Google the Institute for Participatory Management and Planning–IPMP. I’ve found their courses to be both rigorous and useful.

As with many ideas, it looks nice and easy on paper … but in reality is messy and hard to do. That doesn’t mean it should not be done, it just means that some heavy lifting & real effort is required. Citizen engagement is great & a source of many good ideas, but sometimes the folks most engaged have their own agenda which may not align with the goals set by the elected officials, the enacted legislation, or the government managers who are charged with running the organization. Sorting through all this requires communication (and not infrequent mis-communication). In some cases the citizens that engage in an issue are not reprentative, but are instead a vocal minority, so some discernment is also required. As far as sharing power (control), there is always the potential for bad actors to make bad choices.

Bottomline – engage, but verify that the input is valid and if you are giving away control to citizens consider some limits so as to avoid the potential negative consequences.

I know that the Government of British Columbia has an office of citizen engagement. It would be interesting to see if they leveraged Arnstein’s theory. http://www.gov.bc.ca/citz/citizens_engagement/

The problem with Arnstein’s model is that it conflates the public’s level of influence with ethical soundness. To Arnstein, engaging the public at lower levels of impact (inform, consult) implies ethically questionable behavior on part of the decision maker (“Tokenism”).

In my view that is inaccurate and cannot serve as a model today.

Thinking for some time on this model, I have to agree, it is flawed and can’t and shouldn’t be implemented. This may sound like heresy, but citizens are already involved, it’s called the power of the vote. So let’s just look past the utopia visions of this “theory”. Agencies are run by politicians (it would surprise you how many political appointees there are in key positions in the higher echelons of the Government). Politicians by nature will never give up their control over the Government past the Consultation stage. And, they will never, ever, work in partnerships with the masses beyond getting their vote (which let’s face, over the last 20 years has evolved into more of who to vote against as being more the factor than who to vote for when casting ballots). Additionally, with “Citizen Engagement” comes “Citizen Power”. Do we really want the common citizen running the government? And which citizens will be engaged in the “Citizen Power”? You can’t have all citizens engaged. So what groups will they by nature fall into to represent the citizens? With “Citizen Power” you will eventually end up with opposing polls which will probably be aligned along the natural political divisions that already exist (so what have you gained). I subscribe to the theory that a person, by themselves, may be smart (though I have to admit many are not), however people are not. People tend to grow into self-centered unpredictable mobs that usually follow the most radical elements in the mob. In a utopia this may work. But we do not live in a utopia. History is full of examples of this, especially in the 20th century…that lead to 2 World Wars and countless conflicts, genocide, ethnic cleansing, etc. And, I have to say that there are many things that occur in government that the people should never ever know about. Also, as an academic study, this is interesting. In actuality, unless you are one of the Political Appointees running the Agencies at the highest echelons, you really can’t influence this, so why waste the effort.

[…] therein lies the main problem with Arnstein. As I alluded to over on Govloop a while ago, the ladder conflates the public’s level of impact on the decision making process […]

It’s About the Work, Not the Office – Telework Week