Many government agencies struggle to keep up with emerging technology, and they often become overly attached to outmoded ways of managing data. But it’s tough to imagine an organization more tied to the past than Duet was just a few years ago, before streamlining its operations.

Consider this: From 1971 — when Duet, which supports people with developmental disabilities, was founded as part of the Eastern Nebraska Human Services Agency — to the year 2016, there was almost no change in how the organization did business.

Payroll still was recorded on carbon copy timesheets. Pension contribution details were kept on 3×5 index cards. Direct deposit updates required filling out paper forms, putting them in envelopes, and waiting for someone to pick them up and drive them to an administrative office.

During Thursday’s GovLoop online training session, entitled “From Paper to Digital: Moving Out of the Legacy Era,” however, executives at Duet proudly reported that their world had changed. 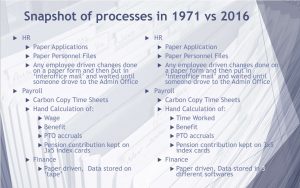 Sarah Graham, Duet’s Deputy Director, said that using Workday — a provider of cloud-based enterprise management systems — had allowed the organization to establish “one source of truth to make data-driven decisions and then track the outcomes.” By shedding its paper-based systems and becoming digital, Duet managed to:

“We’re now able to plan instead of solely reacting,” she said, and to survive the unexpected. “Had we not pulled the trigger and moved to Workday, closing down due to the pandemic would have completely stopped our business.”

In the past, it was impossible for Duet staff to act on updated, reliable financial information, Graham explained, since the most recent data generally was 90-days old. Employees were overworked, and morale could have been better.

But today, HR and document management are completely transformed, Graham said, and there’s been a huge improvement in worker satisfaction.

How the Process Began

According to Debbie Herbel, Duet’s Executive Director, the organization’s Governing Board realized that the status quo simply couldn’t continue. Taking advantage of a need to replace the outgoing executive director, the Board hired Herbel and set in motion the modern-day version of Duet.

After settling in and getting to know the organization’s workforce and leadership, Herbel was fortunate, she said, in that she had a team “that had been wanting to progress through technology.” Transitioning to Workday was a year-long journey that began in fall 2018 and concluded on December 16, 2019, when the system went live.

Workday consolidates a public entity’s information into one source, which helps the organization to analyze, plan and execute on its needs. Larry Fitch, Workday’s Principal Value Manager, said during the GovLoop training session that the company offers public and quasi-public entities:

He said Workday has led to huge reductions in the time it takes for payroll processing and annual budget development, among other agency functions.