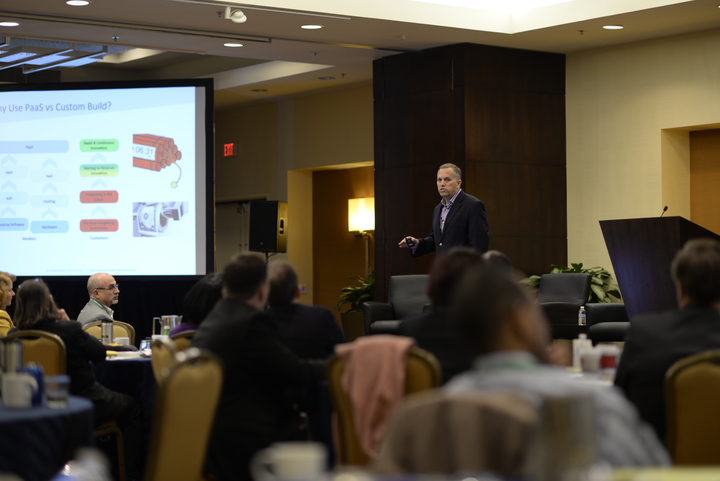 Doing more with less isn’t just a mantra for government agencies. It has quickly become a way of doing business.

Budgets aren’t getting any bigger, but agencies must find creative ways to stretch their dollars and improve services to internal and external customers. Joe Paiva, Chief Information Officer at the International Trade Administration (ITA), knows this reality all too well.

Paiva’s agency is situated within the Commerce Department and operates more like a business than a government entity. ITA is charged with helping U.S. companies export overseas, and that number is growing exponentially, along with the number of foreign markets in which those companies operate.

But ITA’s resources are not growing with the uptick in private-sector customers. The problem is ITA helps 25,000 companies a year, when in fact the agency should be helping 300,000, Paiva said.

Speaking at a May 11 GovLoop event, An Agency’s Journey to the Cloud, Paiva shared the budget and operations challenges that led ITA to adopt cloud services.

“We had a burning platform,” Paiva said. “We had no money, and we had this timeline. We were either going to figure out how to service more customers or we were going to becoming irrelevant.”

If the ITA becoming irrelevant meant savings taxpayers money, that would be one thing. But quite the opposite would have happened, Paiva explained. There would be repercussions, including costing taxpayers more money because the U.S. would fall behind in economic trade.

“We had to look at how do you build out new capabilities very quickly without a lot of money,” he said. What cloud offered was a means to transition from more manual, one-on-one interactions to providing more automated services to a greater number of customers.

Rather than building custom software, ITA relied on commercial-off-the-shelf solutions to meet its mission. “For me, starting with building software was never an option,” Paiva said. He advised government employees to start with commercial products and only build custom software as a last resort.

ITA’s journey to cloud services was a bit unconventional — to say the least. One of the first things Paiva did was shut down the agency’s data center. Now bear in mind that all roads led to that data center from across ITA’s more than 200 offices in nearly 100 countries. As you may have guessed, that created a lot of bottleneck.

When the time came to renew the data center lease, Paiva didn’t sign it. “We moved hundreds and hundreds of servers into Amazon,” he said, adding that he wouldn’t recommend other agencies take the same route as ITA. “I would not suggest doing it in six months,” he added.

As it relates to cloud, one element Paiva wants to see mature is software defined networks.

Here’s one way to think of software defined networking (SDN): Consider all the applications agencies use to communicate with the workforce, respond to citizen requests, and carry out daily operations. It’s critical that those applications are readily available and maintained without disrupting the mission, right?

Well, government IT organizations must ensure their enterprise networks can support those applications and cater to evolving agency requirements. The challenge most technologists face is how best to support a dynamic network when many of their processes are not automated. The promise of SDN is that agencies can use software to change the behavior of the network.

Anytime there’s major change in an organization, such as cloud adoption, cultural issues can creep up. For Paiva, the greatest cultural challenges were with the business side of the agency, not IT.

“The culture there is more important,” he said. “I did not come in and say, ‘I had a mandate from God.’ I went into this job and picked the change agents.”