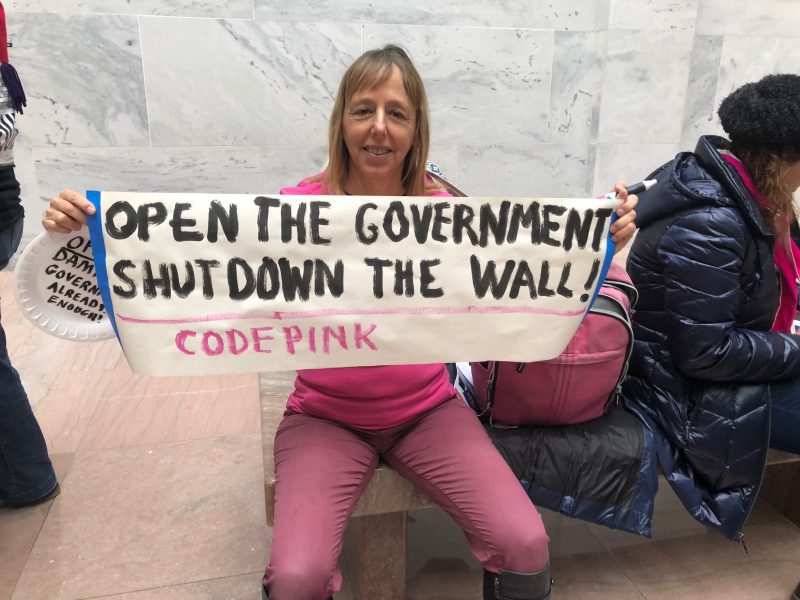 After going through a security checkpoint, protestors walked into the Hart Senate Building at noon today and were immediately greeted with invitations to write their sentiments in Sharpie on Styrofoam plates. Some came with nothing more than compassion for federal employees, others brought along signs and agency affiliations. 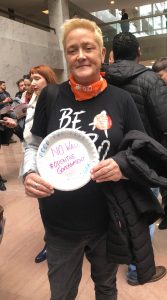 Jeni Sands, a local caterer who has lost business due to the shutdown. She came out to support federal workers.

Messages on the plates read “no wall” and “stop the hostage taking.” The environment was hushed, perhaps due to the officers that surrounded the area — but charged. Spectators viewed the hundreds of protestors from the many floors overlooking the building lobby.

Nearly a dozen organizations collaborated to put together the protest, including the National Federation of Federal Employees (NFFE) and the Machinists Union.

Medea Benjamin, a peace activist, told GovLoop about her reasons for coming to the protest: “I think that there are all kinds of government agencies that do important work, like the EPA [Environmental Protection Agency] and TSA [Transportation Security Administration], and I’m concerned about the safety issues. I’m really concerned about the workers themselves. I think it’s unfair that workers are being asked to work without pay. That sounds like indentured servitude to me.”

Workers are suffering the most because of this shutdown, Benjamin said, noting that she has heard “a lot of sad stories about people who are potentially losing their homes, who can’t get the medical care they need, who have to make choices between food and mortgage payments.” She herself has many friends who are federal employees who face financial uncertainty because they don’t know when they’re going to get paid again. “I don’t think that should be the case in this country,” she said.

“Enough is enough,” Benjamin stated. “There’s going to have to be some compromise anyway. Why are we stretching it out for over a month? Just sit down, come up with a deal, and open the government already.”

Jim Sauber, Chief of Staff of the National Association of Letter Carriers, told GovLoop that he and other members of his union came to the protest in solidarity with their brothers and sisters in all the federal unions. 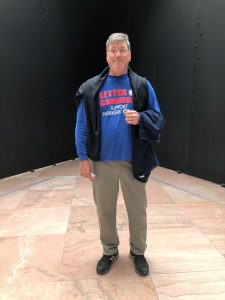 “We think what’s happening to these workers is outrageous,” he said. “Senators have to understand that is affecting real people. This is not an abstract thing. Missing your rent check or not being able to feed your children is not political, it’s personal. Senators have a responsibility separate and apart from the president to do their job.”

The president is not completely exempt from responsibility, however. “We are a bipartisan union, and in our view, the responsibility falls on the president,” Sauber said. “What needs to be done is what’s been done in all other past shutdowns, where you reopen the government temporarily and sit down and work out a border security package. It’s very logical. There’s no reason to tie in funding for the justice department. Our courts are going to close down next week. To tie federal operations to this dispute on how to properly spend border security money is just not right.”

After 33 minutes of silence to mark the 33 days of a partial government shutdown, protestors took up the chant “no more food banks, they need paychecks!” The rhythmic refrain grew in volume before it was hushed, and the crowd finally instructed to disperse.