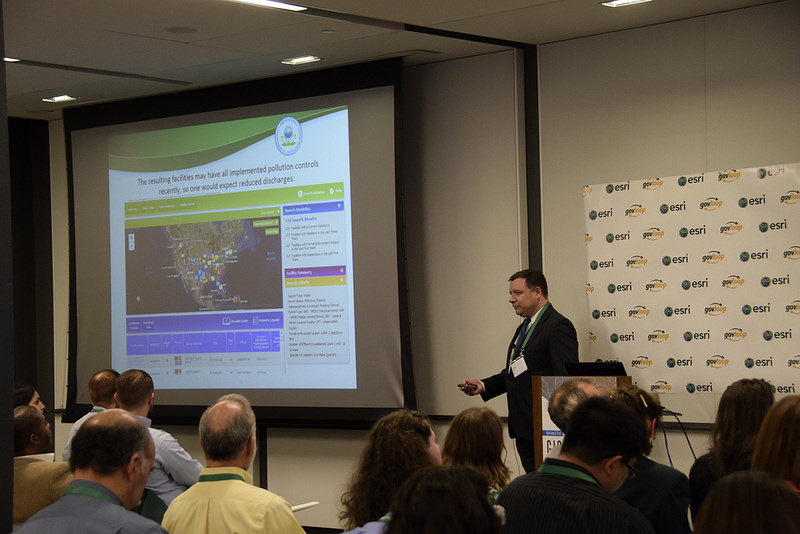 Since the formation of the Environmental Protection Agency in the 1970s, the agency has been flooded with paper reports that detail self-proclaimed emissions, pollution, and toxic releases from companies across the United States. The excessive amount of paper has made it more than difficult to detect or monitor fraudulent reports – perhaps an irony for an agency that is supposed to protect our environment and “save our trees”.

Thankfully, the EPA is entering the digital age in an impactful and important way. In 2013, an Electronic Reporting Rule was proposed to modernize Discharge Monitoring Reports (DMR) under the Clean Water Act. The new rule will transform the entire process by requiring permitted facilities to report their discharge online while allowing the EPA to sort the data more efficiently and effectively.

Thursday night, Esri and GovLoop hosted a meetup that focused on fraud, waste and abuse. One of the speakers, John Veresh, an Information Management Specialist with the EPA, demonstrated the benefits of online reporting. Veresh has been working for over 20 years at the EPA to modernize the monitoring of water waste with geospatial technology. One of his biggest accomplishments has been the initiation of a new modernized Enforcement and Compliance History Online (ECHO) website in 2013. The pollution tracking system is made available to the public to increase community and state engagement in the compliance process.

Before the finalization of the proposed rule, Veresh and his team had to sift through 25,000-30,000 paper documents. After the enactment of the rule, they will receive over 100,000 DMRs from minor and major facilities. ECHO is used to analyze and find patterns in the new large amounts of data. However, with the technology revolution occurring throughout the agency, it is necessary to utilize available systems to better reduce water pollution and detect discrepancies within reporting.

The Integration Targeting and Access Branch and Veresh are currently working with Esri and ArcGIS to build more map components within the data analysis. Prior to electronic reporting and the use of ECHO, fraudulent reports would be investigated based on tips from the community or media. Additionally, the massive amounts of paper created overwhelming situations that generated a limited amount of pattern analysis.

Veresh demonstrated how ECHO displays past violations with the facility’s prior and current toxic releases. The EPA uses this information to create graphs that further indicate patterns. For example, a dramatic decrease in reported releases from a particular facility could be a case of fraud. Without this technology, these patterns may have remained unnoticed

Geospatial analysis will be used more extensively in the future to crosscheck releases and surrounding water impairments such as pollution or excessive fish consumption. Data can be extracted from the water pollution, which allows for the agency to identify where the impairments are coming from.

Veresh also described the value of an effluent-loading tool. This service calculates how many pounds of toxins are released per year. These numbers can be compared to the facility’s reports then indicate the largest sources of pollution.

GIS maps identify facilities and their proximity to water sources. Veresh showed how different colors are used to categorize the causes of impairments as well as the actions taken in the surrounding areas to reduce these impairments. Actions can be anything from fish consumption advisories to beach closures. GIS is important to analyze what impacts the actions have made on the impairments and if facility releases are negatively affecting environment programs in the area.

It is clear that technology is forcing government agencies to modernize their practices while creating better public service. GIS technology is especially transforming into a universal tool that sparks innovation while aiding policy maker’s in their decision-making. These revelations achieved over the past couple years “wouldn’t be possible without geospatial analysis”, said Veresh.

Look out for registration information on the next Esri and GovLoop meetup focused on Story Maps to learn more about Esri while networking with fellow lovers of GIS technology.