The Office of Personnel Management (OPM) recently released the results of its 2019 Federal Employee Viewpoint Survey (FEVS), signifying the first time a governmentwide survey had measured the impacts of a shutdown on the workforce. But despite last winter’s record 35-day partial government shutdown, many survey results improved or remained steady from previous years.

“There’s no secret that this has been a little bit of a tumultuous year because of the budget, and especially when you look at things like engagement … I was pleasantly surprised,” Kimberly Wells, Acting Director of OPM’s Office of Strategy and Innovation, said.

Note: Wells said that a priority for OPM has been overall employee engagement, along the lines of perceptions of leadership, relationships with supervisors and employee feelings of motivation and competency. In 2019, overall engagement remained at 68%, averaged along those three indices, steady from 2018.

On Wells’ team, psychologists, researchers and analysts work to evaluate the results of the survey and discuss next steps. Congress, OPM and the Government Accountability Office (GAO) all use the FEVS report to inform decisions that impact the workforce.

The FEVS is a “climate survey,” Wells said, meaning it measures the workplace environment for employees. All agencies participated in 2019 with the exception of the Veterans Affairs Department (VA), which conducted its own workforce survey. Agencies that participated in the FEVS had the option to tack on agency-specific questions in addition to the 101 general survey items. 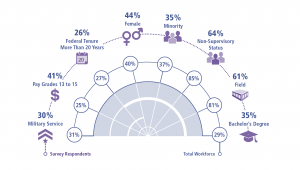 Importantly, the results are influenced by response rates. Employees in smaller agencies, supervisors and those in higher pay ranges respond at higher percentages than the rest of the federal population and, therefore, their responses are disproportionately reflected in survey results. And since VA didn’t participate and the Defense Department responded at lower-than-average levels – both departments that were not directly affected by the shutdown – the percentages in FEVS could overstate the actual impact of the shutdown.

Nonetheless, the FEVS results are the most comprehensive view of all things workforce in the public sector and the first wide-scope peek at the fallout of the government shutdown.

Below are the top five survey results to know from the 2019 FEVS, plus a few bonus facts to take home.

The survey was conducted in the middle of the year before the Social Security Administration notably scrapped teleworking options.

One of the largest jumps in 2018 proved not to be a fluke. In 2017, 71% of respondents agreed with the statement: “My work unit has the job-relevant knowledge and skills necessary to accomplish organizational goals.” That number shot up to 80% last year and continued positively to 81% in the most recent return of FEVS results.

Re-skilling on job-related training has been a major focus for the federal government recently.

Dealing with poor performers has long been a challenge in government, something that the President’s Management Agenda addressed, saying they could hamper the morale of high achievers. But the 34% measure is the second-lowest mark on the survey.

Yet, this is a figure that has improved year over year. In 2015, 28% of respondents agreed with the above statement.

Originally, one-quarter of agencies were reported to have faced budget cuts. But this survey suggests that larger numbers of federal employees than previously reported had their pay impacted by the shutdown. Moreover, 55% of respondents indicated the shutdown had an effect on their work.

Another shutdown remains a possibility for Nov. 21 if the most recent continuing resolution expires.

In the federal workforce, 85% of respondents are not supervisors and 25% are a General Schedule(GS) 13 or higher along the federal pay scale. Federal employees want to move up, but managers can struggle to retain top performers who hit a ceiling. The FEVS report suggests 30% of federal employees are looking for other work, a byproduct of responses pertaining to the shutdown.

However, the 39% mark has improved, as well, up three percentage points since 2017 and improving in each of the last five years.

Thanks for breaking this down Isaac! It’s very informative. I had no idea teleworking is still a question mark for many federal employees.

[…] concern, even among the federal workforce, as the Federal Employee Viewpoint Survey found that only one-third of respondents think proper steps are taken to address poor performers who cannot or will not […]

[…] is a major concern. The Federal Employee Viewpoint Survey found that only one-third of respondents said proper steps are taken to address poor performers who cannot or will not […]