There’s a good chance you’ve walked away from a meeting with this question on your mind: “What was the purpose of that?” In fact, according to studies, U.S. organizations lose billions of dollars every year from poorly run meetings. If it’s that big a problem, why can’t companies fix it? In short, they can.

This was the topic discussed during GovLoop’s recent online training, “How to Lead Effective Meetings.” Mary Abbajay, President and Co-Founder of Careerstone Group as well as a speaker at this year’s Next Generation of Government Training Summit, led listeners through a number of tips on how to succeed as a meeting leader.

“Being the person that can run a great meeting shows your leadership skills, and it shows that you are a person that people need to take seriously,” Abbajay said.

For the training, she laid out four objectives on how to get there.

1. Understand the role of the facilitator and meeting leader.

In addition to the key roles of timekeeper and note keeper, successful meetings require a leader and facilitator, Abbajay said. Often, the latter two roles are combined into one.

Meeting leaders and facilitators have several crucial jobs to ensure the session progresses effectively. They should avoid common meeting hiccups, like not starting or finishing on time, not having a clear focus or a failure to take action after the fact.

“Believe me, if I’m in a meeting and you’re not leading it well, I’m going to railroad it,” Abbajay said. “Wasted time in meetings is actually wasted dollars. It costs money.” 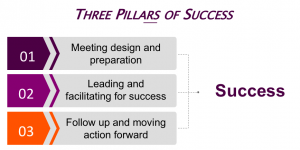 This should probably go without saying, but great meetings don’t happen accidentally. They’re well-designed and have been preceded by a proper amount of preparation, which could range from five minutes to five days to five weeks. It depends on the meeting itself.

Participation is an essential part of a great meeting. No one appreciates being talked at, and when one person hogs the floor, he or she is cheating the organization of the collective wisdom in the room.

She stressed the importance of one ground rule she referred to as a “parking lot,” where important information could be captured but tabled if it’s not essential to the task at hand.

4. Learn the do’s and don’ts of effective conference calls.

Meetings aren’t relegated to in-person events — they can happen over the phone too. And because they’re not face-to-face, they require extra attention and an especially strong leader.

Abbajay cited research that suggested a majority of people performed other tasks while on conference calls.

To try to combat distractions, leaders should provide access to information and meeting materials prior the meeting, arrive at least two minutes early and write down names as people enter the call. It’s also useful to remember to say your name when speaking.

Abbajay recommended subtler tricks as well, including standing up during the call and using timed topics and ground rules.

“At the end of the day, if you do nothing else, try using ground rules,” Abbajay said.

What IoT Means for the Future of Your Agency