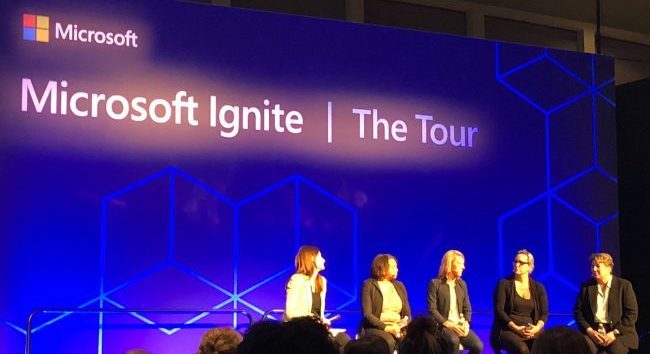 Four leading women in technology spoke at a panel titled “Women in Tech: Our Journey to Ignite Government Innovation” at the annual Microsoft Ignite conference. They encouraged women to acknowledge their talents and advocate for themselves in the workplace.

Homme asked the panel how things are different for women in technology, compared with their male counterparts, and for advice on getting a seat at the table considering those differences.

Britton responded by urging women to “begin with their voice.” “If you are in the room and you are at the table, you’ve done everything you need to do to be there,” she said, adding that women must acknowledge themselves and their capabilities. If you do have a technical background, Britton encouraged putting yourself in the position of a translator when you’re in a room with senior leadership: “They may be looking at profit. They may be looking at revenue, but they may be looking at efficiency. Be a translator to help them identify how technology matters to them.”

Britton also advised women to advocate for themselves and each other. “Each one, reach one,” she stated. “I always say that because I think of all the talented women in all of our organizations.”

Metzger pointed to the interesting nature of the adage “seat at the table” because no one, except for perhaps a great mentor, says “here’s a seat, come sit at this seat.” More often than not, “you just have to go out and claim it,” she said. “You have to go sit at the table and say, ‘I deserve to be here.'”

Metzger explained, “earlier on in my career, I remember having that imposter syndrome, and thinking, I don’t know if I actually know enough to be sitting at the table.” However, she urged women to remember that everyone is faking it to some degree. “If you’re smart and you’re betting on yourself, then you’re going to go pretty far.”

Sartin said that she had been struggling with the idea of a seat at a table for a little while because she thinks the idea lacks merit. “Action only happens when your voice is heard and when you hold people accountable after you’ve raised your voice,” she said.

Sartin has been in situations where men invite women to the table, ask for their opinions, and turn around and do what they would’ve done anyway. “I really struggle with this, and I’m very vocal about it,” she said. “I will hold you accountable. If you sit in a meeting with me and I voice my opinion, I’ll make sure to consistently follow up and make sure the thing that I said was heard.”

“It was a huge struggle for a lot of women to get here, but now there’s an opportunity to be pushing for more,” Sartin said. “You have to create those opportunities for yourself.”

Adams agreed with everything that had been said, and further highlighted her own struggle with wanting to master something before saying that she knows what she’s doing. “That’s not necessarily how the world works in work,” Adams said. “You’re not getting a grade of A, B, C or D, you’re actually trying to lend value and find a solution in a team-oriented environment. You don’t necessarily have to be the expert of everything in the room.”

Adams said that women tend to downplay their skills and wait before they even attempt to act on their interests because they want to be an expert before they do. “It’s very difficult to do that because you learn from other people and you learn via on-the-job training,” she explained. “If you don’t take that first step and know that you’re smart enough to actually get into something, it makes it much more difficult to get a seat at the table.”

One of the pieces of advice that Adams received about this was to get good at one thing, set goals, and accomplish something. People will notice when you start making that impact.

There are also communication barriers women have to overcome when they get to the table. “We communicate differently as women,” Adams said. She also highlighted differences in perception: “When a woman yells it’s not quite the same as when a man does, for a lot of different cultural reasons… it’s just the way that you’re perceived.”

Even though the struggle continues for women to be acknowledged in the same way as their male counterparts, the trailblazing that the women on the stage are leading today indicates a brighter future ahead.

“It’s OK to be off-balance,” Britton said. “It’s OK to re-invent, re-imagine, to re-constitute. It’s OK to have new responsibilities but be off balance. Take a dare. Make your dreams happen.”