This Q&A is the first of a GovLoop series called “CDO Conversations.” We’ll feature conversational interviews with federal, state and local chief data officers (CDOs) to get to know the role and the people behind the titles.

“I describe my job in one sentence as developing and implementing a strategy to leverage, protect [and] maximize the value of the state’s data as a strategic asset,” said Colorado’s Chief Data Officer (CDO) Jon Gottsegen at the National Association of State Chief Information Officers’ (NASCIO) 50-year anniversary conference.

In 2020, Colorado’s CDO is balancing data privacy to protect residents and open data sharing to help agencies leverage information. Gottsegen spoke to Emily Jarvis, Senior Online and Events Editor at GovLoop, about how various state services can ultimately be related to a common issue. For example, housing, nutrition and access to the outdoors are all tied to the issue of health care. He shared that the relationships across these services are what drive agencies to use data as a strategic asset.

“I always like to say when I talk to the other folks in OIT [Office of Information Technology] — all the other geeks, you know — we’re talking about people’s lives,” Gottsegen said. “And we take that really seriously. We really are trying to improve people’s lives. We’re trying to protect people. And we can only do that by starting to manage the data and integrate the data better.”

GOVLOOP: What does the state Chief Data Officer do? 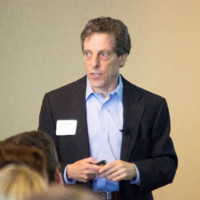 GOTTSEGEN: I describe my job in one sentence as developing and implementing a strategy to leverage, protect [and] maximize the value of the state’s data as a strategic asset.

I think that the critical piece is that last part — the strategic asset — because there’s plenty of data, and it can just sit there. How do you think about using it as a strategic asset?

The using it is one piece of it. But there are a lot of elements that go into that, like are we governing the data well, appropriately and in a standard fashion? Do we know what data exists out there?  Are the procedures, the rules or the processes for making decisions about the data in place? So that there’s that governance piece.

And then are we sharing the data? We’re noticing more and more — as many states are — that the various systems and services that the state provides and is engaged in are really related. We know that housing is a health care issue, right? We know that nutritional support is a health care issue. Even access to the outdoors, which is a major initiative of the last governor — all related to health care. As we start identifying what those relationships are, we have to understand them better. We have to understand the magnitude and how one impacts the other in a more specific way. That’s what’s driving a lot of the use.

We have to get to the point where we can, in fact, integrate those data, and that involves data sharing — the legal, organizational aspects around that. Which, frankly, we’re struggling a little bit, but we’re making some progress.

I always like to say when I talk to the other folks in OIT, all the other geeks, you know, we’re talking about people’s lives. And we take that really seriously. We are really trying to improve people’s lives. We’re trying to protect people. And we can only do that by really starting to manage the data and integrate the data better.

What are some of the challenges you are facing when it comes to viewing data as a strategic asset?

Data sharing and privacy is one piece of it. Of course, the data sharing restrictions are often related to privacy and the rules and regs around that. We at OIT often say that we do security; the business does privacy. Obviously, that’s a simplification. But because it’s up to the business to determine what their level of risk [or] tolerance is, if they allow people to see their data, we’ll tell them what controls have to be wrapped around the data or wrapped around the systems that house that data.

Now having said that, as CDO, I’m blurring that line, because people are looking to me like, “Can you help us develop some more privacy things?” So we’re trying to work with the Attorney General’s office to get clarity around some of the legal guidance. But it comes down to leadership a lot of times, and there’s a risk tolerance. It’s like, “Yes, as a leader, I’m willing to accept the risk that someone sees this data. But it’s that important to me because I know we’ll save lots in the process.”

The identity piece, we talk about two different things: identity resolution and then identity and access management. Identity resolution’s basically the matching of identities across systems.  And we’re working on a project to replace an old system that’s on the mainframe and was used for Human Services and Health Care for 20 years. We’re really looking at a more robust identity resolution process.

The one thing we’re staying away from in the state — we’re being very deliberate about this, because we’ve been told actually from the governor — that we don’t want one single database that contains all the information, from all the systems, about a single individual.

The concern is, we have the mother of all databases, right? Either to hack, or people are worried about surveillance. There’s a lot of politics around it. Our Department of Education went through this years ago. Now, there’s a real stringent sort of approach to privacy when it comes to students in Colorado. So we’re being careful about that. That’s kind of a driver for us.

Looking back at 2019, is there a problem or program that you are proud of and think you made some really big leaps in?

We kicked off a project — actually, honest to goodness, kicked it off. We’d been talking about it for six years. [It’s] called the Joint Agency Interoperability Project. It’s a data interoperability project within the Department of Human Services.

The idea is just all the stuff we’ve been talking about in really laying the framework and developing a reference architecture and platform for data integration and interoperability. We chose four major systems to do this with. We developed a little, what we call, a caseworker view screen that provides a very limited set of data, but the ability to say, “Is this person in this program? We know they’re in the Medicaid/Medicare system, so are they also in these other programs?” And that, in a way, is kind of the small piece of it.

What we did was we based that all on top of an API [application programming interface]-led strategy we are pursuing for data integration.

I like to simplify things down to one catchphrase: All data integrations and data sharing will be through APIs, through our enterprise service bus.

Now I know that the reality of that is we’ll never get to 100%, and it’s a 10-, 15-year project to even get to the significant number. But we plant the stake in the ground.

Looking forward to 2020, you’ve mentioned a lot of things that you all are working on. What are a couple of things at the top of your priority list?

The other thing we did was we just had this body — we call the Government Data Advisory Board — approve a data strategy for the state. Now we’re getting to execute on that.

We are maturing the API strategy and really rolling that out to additional systems, to other departments, building that team up so that it’s very clear what they’re doing and how they move ahead. We’re moving ahead with the next phase of interoperability, which will integrate future additional systems.

The other thing we’re doing is data governance-as-a-service. We’ve deployed a data governance tool, again, for the interoperability, laying the framework for that. But now, how do we get other agencies to really start pursuing a data governance program that’s more robust and systematic? And can we provide that foundation? We’re also rolling in enterprise BI [business intelligence] services. So those are my four major tasks.

You mentioned your data team. What does that team or your workforce look like?

So I’m also the state GIS coordinator, and that’s how I came up into data. I have a GIS team for the coordination, and broadband mapping is part of that. And then I’ve got a data integrations team, which is really focused on the API development and the integrations piece. The other pieces, like the governance and the BI and so on, don’t have anyone there yet. I put in a budget request to try to build out some staff to help support those.

That’s wonderful to have executive support. It doesn’t happen for everyone so that is great. Is there anything else you’re excited about in the government data world?

Yeah, there’s one thing I could mention here. I think about 18 states or so have CDOs now, and we’re starting to collaborate more and develop a consortium, which I think is great. It’s going to be great for sharing. We’re all sort of trying to do the same things. Some of us are focusing more on open data, or some on data sharing and so on. So that’s an interesting crowd of folks that you may want to pay attention to.