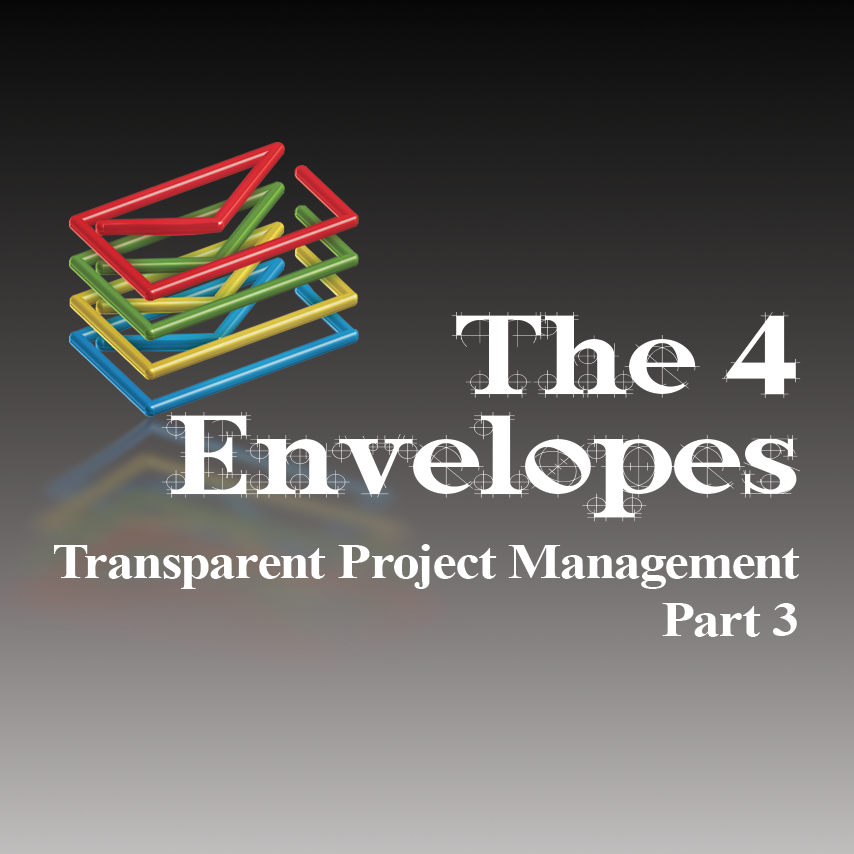 I began elaborating on the Project Management envelope in Transparent Project Management two weeks ago. Last week in Part 2 I covered why and how this envelope needs to be pushed to help implement a new paradigm in federal IT. In this concluding blog on the first of the four envelopes, I’ll focus on what a federal PMO might look like within a reorganized Office of E-Government and Information Technology within the Office of Management and Budget – an office reorganized more like its private sector analogue and focused more on effectiveness and mission success and less on organizational conformity at their expense.

As shown below, the existing Office of E-Government and Information Technology is almost exclusively focused on oversight of the CFO departments and agencies, the IT elements of the President’s budget, and (most recently) on cybersecurity issues arising from a series of highly visible lapses. Given that gaps and frequent changes in the federal CIO’s position occur, a career member of the Senior Executive Service serves as the Deputy CIO. Lisa Schlosser has held that position for several years, transitioning into it from the Environmental Protection Agency. The Plum Book lists only four positions within the office, of which only three are executive positions. The “administrator,” who is also titled as the Federal CIO, is a presidential appointee who does not require Senate confirmation. Both the deputy and the Federal Chief (Enterprise) Architect are career appointments.

In no other organization I have been able to identify has the enterprise CIO been so far removed from the Chief Executive Officer or, in this case, the President. Indeed, the current Deputy CIO and Administrator of the newly created U.S. Digital Service, Mikey Dickerson, is much better connected to the Oval Office than the federal CIO by virtue of his rescue of the failed healthcare.gov web site. But, as also shown by the existing office org chart, USDS is an appendage, not an integrated element of the E-Gov and IT office – a place to put the USDS for lack of any other suitable location and a convenience. While the existing structure and organizational placement of USDS is adequate, the adequacy is based more on this particular administration and this particular collection of private-sector, temporary public servants than anything else. It could also be argued the current organization also provides the cleanest concentration of Google staffers temporarily on loan to the federal government. No examination of the White House visitor’s log need be conducted to determine Google’s influence on the White House – a simple examination of the résumés of those in USDS leadership positions and general staff population is much more revealing in that regard and their interactions with the administration and throughout the executive branch by virtue of their distributed development teams is at heights and breadths no registered lobbyist could ever hope to achieve. The full measure of what they are owed by the public for their service has yet to be fully told, but it is enormous on both the organizational and personal levels. 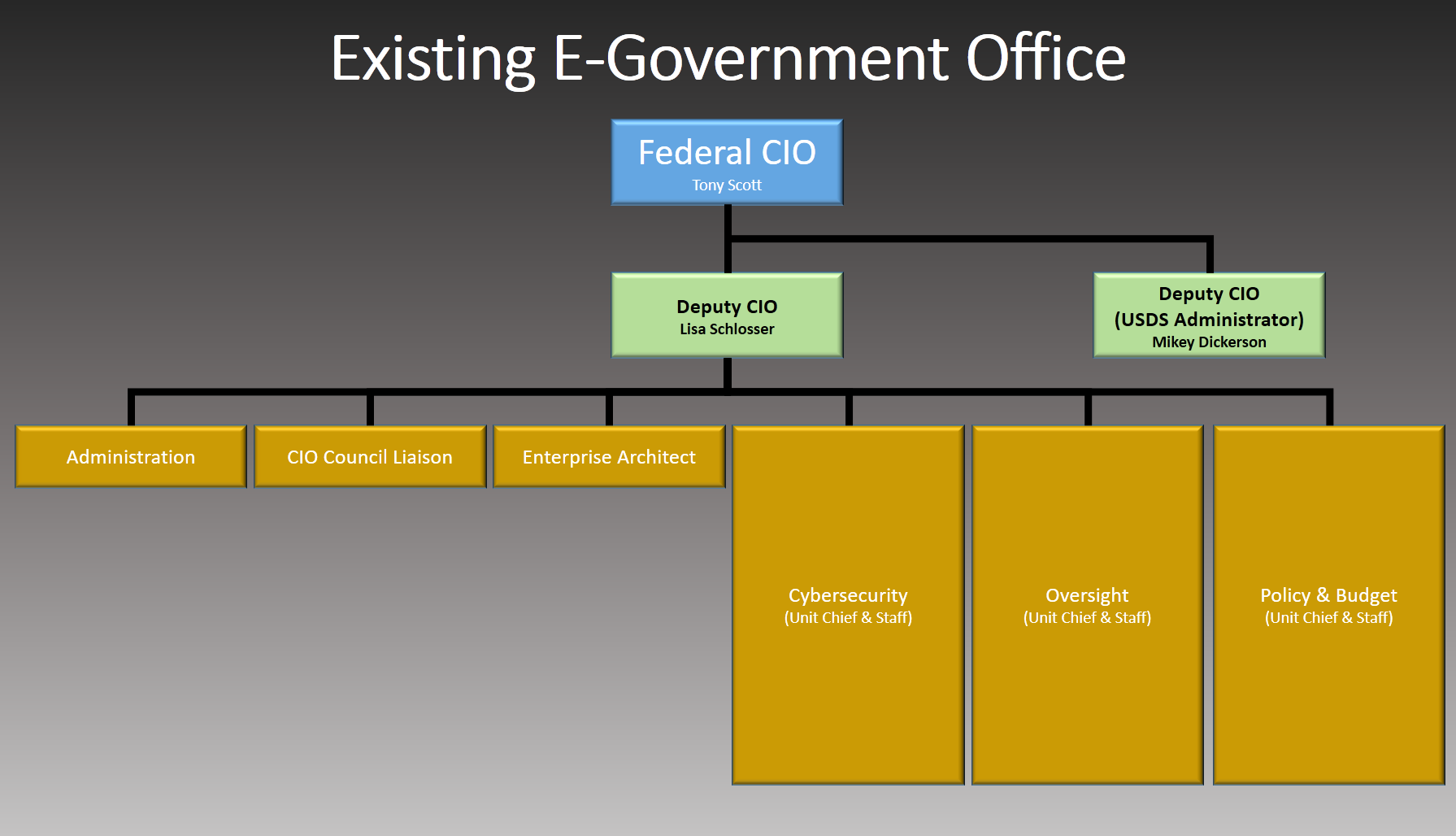 The existing structure of the OMB Office of E-Government & Information Technology is geared toward oversight and policy, consistent with other OMB offices.

Notwithstanding the E-Government Act of 2002 requirement to improve the ability of the government to achieve agency missions and program performance goals, the statute did not include specific language requiring OMB to implement portfolio, program, and project best-practices on either an executive or operational level. The ad hoc creation of the U.S. Digital Service, however, taught us the creation of such a P³MO organization within the E-Government and IT office does not require specific, enabling legislation as long as the underlying provisions of the E-Government Act of 2002 are met. To that end (and somewhat ahead of future blogs on each of the remaining transformational envelopes), the following reorganization of that office is proposed.

The organization chart shown retains the traditional oversight and budget functionality of the office (and OMB in general), while reducing hierarchical layers by expanding the number of Deputy CIOs reporting directly to the federal CIO from two to four, distributing the four envelopes across three of the four Deputy CIOs. The existing cybersecurity staffing is reassigned to the enterprise architecture envelope under the rubric of building in, not adding on such functionality. The new functions of user experience and collaborative development are both assigned to an integrated US Digital Service because they are fundamental to the open, agile processes they have carried into the federal workplace.

To the point of this blog, transparent project management, current portfolio and program policy and practice areas are grouped under a unit chief within the P³MO. A new group to handle operational PMO functions for the “strategic” project category is also added to the organization to provide immediate management and visibility to key administration objectives involving technology (e.g., think healthcare.gov). Whether a program or project is strategic, major, or non-major, it is essential that analysis of planning, progress, and risk is conducted using consistent, reliable metrics. This is the function of the third group within the P³MO, oversight and analysis. 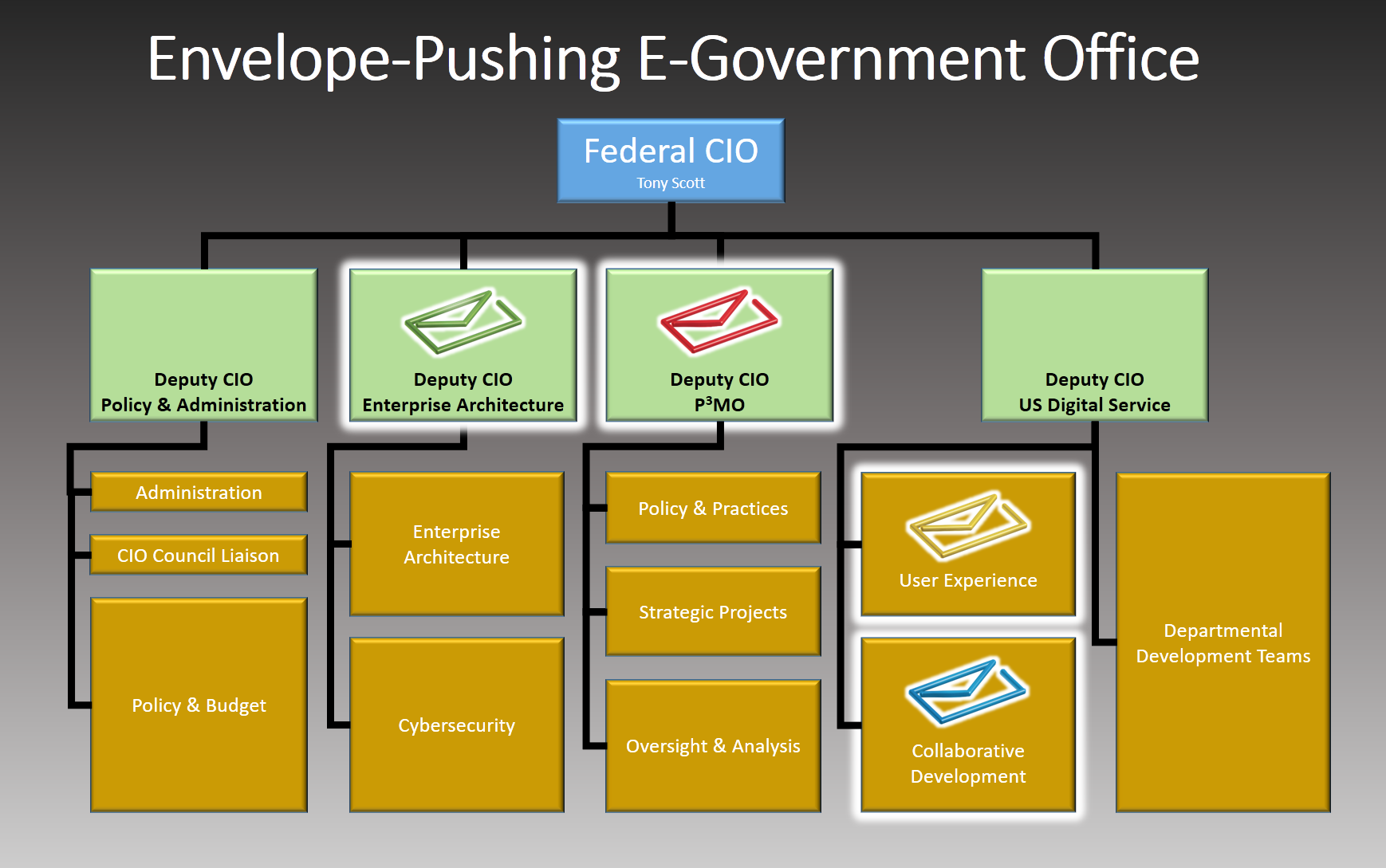 Reorganization and expansion of the OMB Office of E-Government & Information Technology, while preserving oversight and policy governance functions, adds a focus on the four envelopes that must be pushed to reestablish public confidence in federal IT, and integrating the efforts of the emergent US Digital Service by assigning to it the two newer disciplines of the envelope group: user experience and collaborative development.

The key to rebuilding public confidence is transparency – transparent planning, transparent execution, transparent monitoring, transparent risk, transparent success, and, yes, transparent failure. While the current federal IT dashboard sought to introduce transparency to the broader set of federal IT investments, it was doomed to fail because it was disconnected from any scalable Project Management Information System (PMIS) that could provide consistent project ground-truth. Worse, the dashboard was superficial despite its recent enhancement – drill-downs were simply not supported to any level where public confidence in the believability of the information being presented could be supported. Worse, it only reported at a gross metrics basis and didn’t seek to engage the public, oversight groups, special interest groups, academia and other stakeholders.

By way of example, imagine a fully accessible P³MO portal available in the wake of the Veterans Administration appointment scheduling scandal and remedial IT investment. How much more convincing would it have been to have fully engaged the public by inviting identification of and voting-up user stories, examining schedules for and components of development sprints including contributions to the WBS refinement, monitoring the earned value and burndown rates, reviewing and commenting on project artifacts…actually engaging with the team addressing the issue, collaborating with the people paying for the project, the stakeholders and sponsors.

In envisioning what the pushed project management envelope would look like and how it would achieve complete transparency, I’ve drawn upon two instances where I’ve already set up Project Management Information Systems (PMIS) within the federal government. In both cases the specific system used was Microsoft’s Project Server 2013 – one while the product was still in development and not yet generally released, and one after the product was well established and available through a FedRamp-certified hosting provider. The later one was also integrated with a full lifecycle management system, Microsoft’s Visual Studio Team Foundation Server 2013, which will come more fully into play when the other envelopes are discussed in more detail. I’ll also be using several screen shots borrowed from FluentPro, who offer portfolio and project dashboard tools and services. While the existing implementations and envisioned envelope are depicted using Microsoft technology, there any number of other system alternatives that could be used, many of which could be integrated with the emergent, publicly available, project ground-truth dashboard that would supersede the existing federal IT dashboard. The envisioned, integrated P³MO portal will be included in a blog following those for the other three envelopes.

The establishment of a P³MO within the CIO’s office at OMB can only achieve the scale needed to serve the entire federal government through the use of PMIS like those I’ve already helped deploy, but on an integrated roll-up/drill-down basis, allowing all stakeholders to drill all the way down to work breakdown structures, task resourcing, pro-forma costing, risk planning, and process artifacts irrespective of the developmental methodology. This degree of transparency has never been attempted within the federal public sector, but reestablishing public trust and confidence demands just such an unprecedented approach and degree of openness and engagement.

Next week we’ll move on to the second of the four envelopes: Enterprise architecture. Once we’ve discussed all four envelopes, we’ll put them all together in an integrated, transparent portal to create the foundation for a new paradigm of federal IT.

5 Ways to Love Your Job More