As the Trump administration approaches the end of its first year, watchdogs and journalists have begun to take stock of all that has happened. Trump lost 34% of his senior staff so far, far exceeding the rate of his predecessors. 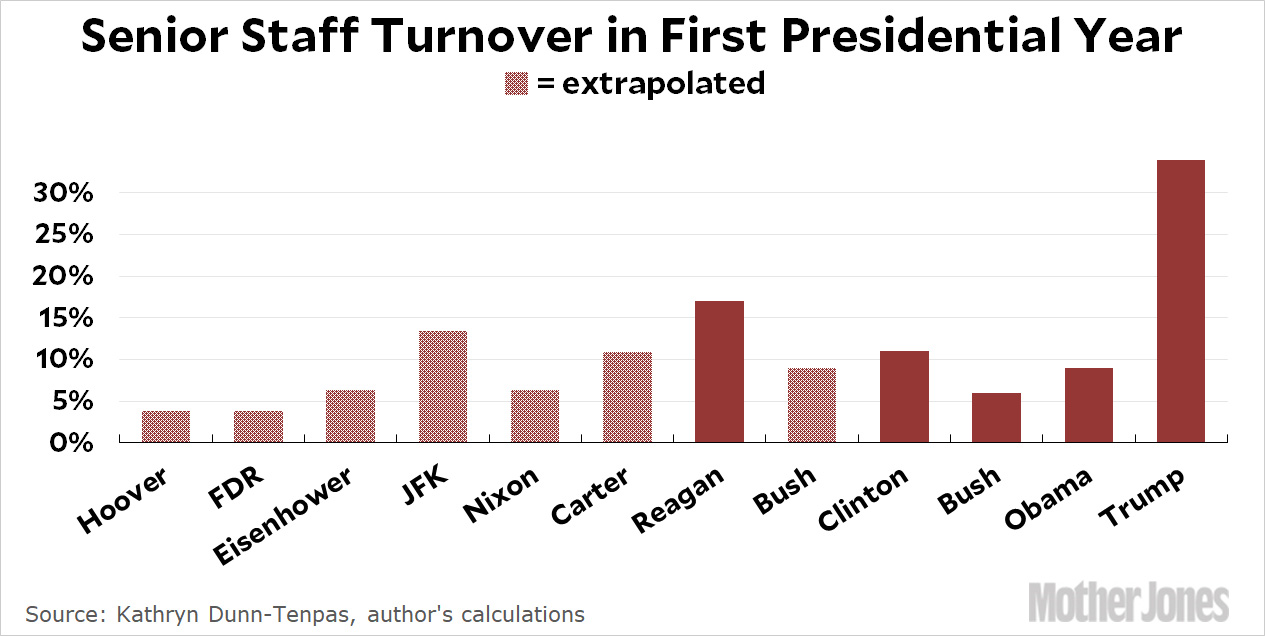 Government shrinkage under Trump isn’t just at the senior staff level. In an important article on the shrinking federal workforce, The Washington Post reported that “all Cabinet departments except Homeland Security, Veterans Affairs and Interior had fewer permanent staff than when Trump took office in January — with most shedding many hundreds of employees.”

As Trump’s 1-year anniversary nears, a new wave of departures has begun. Deputy national security adviser Dina Powell announced she would leave in January, and was reported to be “exiting on good terms with the president.” Deputy chief of staff Rick Dearborn said he would resign in the new year.

Omarosa Manigault-Newman, director of communications for the Office of Public Liaison, made a sudden departure. The White House said she resigned, she said she left voluntarily, and sources told reporters that Chief of Staff John Kelly fired her. Accounts said Manigault-Newman “reacted angrily” and had to be escorted from the White House. While the Secret Service tweeted it was “not involved in the termination process,” it neither confirmed or denied whether Manigault-Newman had to be physically removed. The Associated Press noted “the White House has lost arguably its most prominent and visible African-American senior staffer.”

Just before the new year, Trump fired all the members of the Presidential Advisory Council on HIV/AIDS , known as PACHA. The White House offered no explanation. The move was criticized for “putting politics before public health.” In December it was revealed that Dan Meyer, director of the Intelligence Community Whistleblowing and Source Protection program, was put on administrative leave in November.

After Matthew Spencer Peterson was unable to answer basic questions about law during a Senate Judiciary Committee hearing—and the video of the testimony went viral—he withdrew his nomination for federal judge on the U.S. District Court for the District of Columbia.

MUST WATCH: Republican @SenJohnKennedy asks one of @realDonaldTrump’s US District Judge nominees basic questions of law & he can’t answer a single one. Hoo-boy. pic.twitter.com/fphQx2o1rc

The White House did not move forward with two other highly controversial judicial nominees: Brett Talley and Jeff Mateer. Talley, who has never tried a case in court, was deemed “not qualified” by the American Bar Association and failed to disclose a potential conflict of interest. Mateer admitted to discriminating against people on the basis of their sexual orientation.

Dr. Dean Winslow withdrew from consideration to become  assistant secretary of defense for health affairs, the Pentagon’s top health official, after he testified before the Senate that it is “insane” that American civilians can buy semi-automatic assault rifles.

Michael Dourson withdrew his nomination to lead the EPA’s Office of Chemical Safety and Pollution Prevention once it became clear the Senate was likely to reject his nomination because of his conflicts of interest.

The Senate declined to consider the nomination of Kathleen Hartnett Hurst for chair of the EPA’s Council on Environmental Quality. The Trump administration will need decide if it wants to renominate White, who has faced fierce opposition from science groups. Trump will also need to renominate people for other agency positions, including several people up for spots in the Labor Department.

The Senate confirmed a slew of nominees to wrap up the end of the year.

Kirstjen Nielsen was confirmed as secretary of the Department of Homeland Security. DHS acting secretary Elaine Duke will stay on as deputy secretary.

Joseph Balash was confirmed as assistant secretary for land and minerals management at the Interior Department despite concerns over his “past efforts to unlock the Arctic National Wildlife Refuge for minerals exploration.” The Senate also confirmed Timothy Petty as the Interior’s assistant secretary for water and science; Linda Capuano to run the Energy Information Administration at the Energy Department; and John Vonglis as chief financial officer of the Energy Department.

Confirmed to join the Labor Department are Preston Rutledge as assistant secretary of labor for the Employee Benefits Security Administration; Katherine Brunett McGuire as assistant secretary of labor for congressional and intergovernmental affairs; and Kate O’Scannalain as solicitor of labor, the Labor Department’s top lawyer.

Four new members were confirmed to board positions for the Tennessee Valley Authority. The Times Free Press noted that “all four new board members are white males and most have business backgrounds.”

December seemed as filled with agency drama as it was with drummers drumming, pipers piping, and lords a-leaping. So much happened that could affect government employees that there isn’t space to go into detail about it all. Here are a few highlights (or lowlights, depending on your point of view):

Note: This article not an opinion about or endorsement of any policies, regulations, or orders, nor of the behaviors of elected officials, political appointees, government employees, other individuals, organizations, or agencies.