I’ve been thinking about a concept that Episcopal priest, Cynthia Bourgeault, called “The Law of Three.” Although the context of her writing is faith-based, The “Law of Three” has an important practical application in purely secular situations. It presents a third path out of our common human framework of dualistic thinking, which often prevents us from resolving conflict.

What is Dualistic Thinking?

Duality is the default style of thinking most of us use in our daily interactions. We are wired to see things in binary terms – right-wrong, black-white, winning-losing, my way-the highway. Accepting this dualistic worldview prevents us from seeing beyond our immediate preferences and our need for those preferences to be validated in the face of opposition.

Duality is the root cause of many problems at work and life in general. Our inability to see beyond a dualistic perspective both causes problems and prevents us from finding solutions. Understanding the Law of Three and finding a third path around, beyond and through duality can help us find more meaningful and innovative solutions to our most persistent problems.

Unfortunately, understanding and embracing the Law of Three is easier said than done. Our tendency to see the world through a dualistic lens is deeply rooted in our DNA. This lens makes it difficult to even perceive our own dualistic predisposition. And even if we recognize the perils of our dualistic thinking, it’s even more difficult to move beyond duality to find a third path.

What is the Third Path?

The Law of Three requires that we literally think outside the box of our deeply ingrained dualism. In their book “The Art of Possibility,” Benjamin and Rosamund Zander provide a visual representation of this concept by describing a popular brain teaser in which we are asked to connect nine dots aligned in a square by drawing only four connected straight lines. 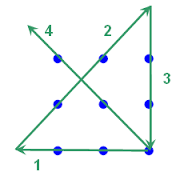 The trick is to extend the lines beyond the boundaries of the box formed by the nine dots. It’s impossible to solve the puzzle if we limit our perspective to the box. Our eyes and minds are drawn to the dots. That is, there can be no solution if we assume that the dots constitute the outer edges of our universe of possibility.

Albert Einstein referred to this concept when he said, “We cannot solve our problems with the same level of thinking that created them.” Duality creates binary problems in a world whose outer edges extend well beyond the boundaries that duality offers. We can’t find solutions with our dualistic thinking. We can only create more problems.

The Field of Possibility

Cynthia Bourgeault summarizes the Law of Three with two points: “1) the problem is never the enemy but the opportunity; and 2) the problem will never be solved through eliminating or silencing the opposition but only through creating a new field of possibility large enough to hold the tension of the opposites and launch them in a new direction.​” A third path.

Even to me this is all sounds pretty esoteric. But it also sounds deeply right. And it seems a promising approach to solving our most intractable problems. Still, as I write about the importance and power of finding a third path beyond our dualistic ways, I admit that I regularly struggle with my own tendency to default to dualistic thinking.

Naming Our Barriers Can Diminish Them

In my own efforts to practice the Law of Three and to find my way to a third path, I’ve found one helpful strategy. When I recognize that my dualistic thinking has gotten me fixated on having things my way, I try to be honest about it and call it out. By admitting out loud that binary thinking is blocking our way to a third path, we begin to see the limits we are imposing on potential solutions and progress. Describing a seemingly formidable barrier that’s blocking our path forward can diminish its power, and can reveal a third path beyond it.

Bourgeault offers another strategy to help break through the common trap of duality, where all we know is our way or the opposing way. She says, “Allow space for the unknown.”​ Approaching opposition with an eagerness to learn something new is one way to make that space. And as Martin Luther King, Jr., said, “If we are to have peace on earth, our loyalties must…transcend our race, our tribe, our class and our nation; and this means we must develop a world perspective.”

We could all benefit from allowing space for the third path in our lives and work.

This blog does not represent official policies of the Corporation for National and Community Service or those of the U.S. Government.

Challenging the inclination toward binary thinking is so important. Thanks, Jeffrey!

Yes, it is. Unfortunately, too few people recognize the importance of this challenge and too many get stuck perpetuating the binary and focus only on the shortsighted and unproductive path of proving themselves right. Good luck with your efforts to take on the challenge. Jeff

Fantastic article, brilliantly written! Thank you for sharing and challenging our way of thinking.

Thank you for your note, Michele. So glad to hear that it resonated with you. Jeff

How to Show Appreciation to Your Colleagues Without Spending Money