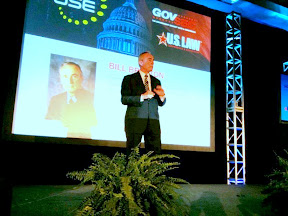 I was in the front row yesterday morning as Bill Bratton — forty year veteran and former Police Chief in Boston, New York City, and Los Angeles — spoke at the Government Security (GovSec) Conference and Expo in Washington, DC. Chief Bratton spent some time afterwards with the folks fromUSIS as he signed books and chatted with attendees on the floor at GovSec (USIS and Altegrity Risk International, where Chief Bratton is the Chairman, are bothAltegrity companies).

A video summary of Chief Bratton’s conversation is forthcoming (hopefully highlighting his thoughts on community policing, which I neglected in the notes that follow), but in the meantime I wanted to share some his salient points (from my perspective, in any case).

“We need to learn from the past to inform the future.“

“The military is in a new world now…” and that it is important that the policing worldpartner with the military.

The security of emerging nations will promote our security.

My thought: interesting how some of Chief Bratton’s thoughts (I have highlighted my favorites in bold) seem to apply so widely in other applications, don’t you think?

Chief Bratton is quite an engaging, conversational, and personable speaker, and it was a pleasure to see him again. I’ll share further thoughts on GovSec as we move forward, but I hope you’ll engage with us via Twitter at #GovSec. Enjoy your afternoon!

My Mother Always Told Me to Be Well Rounded: Do Employers Think the Same?