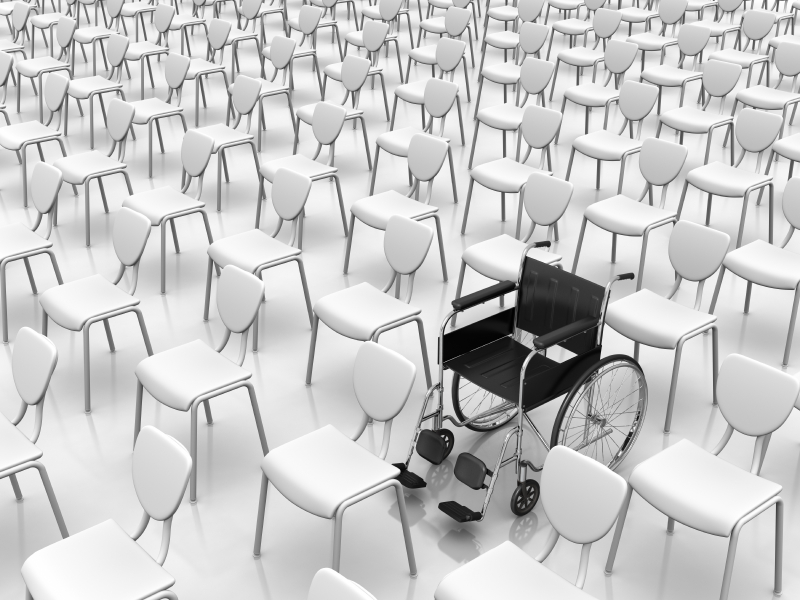 I had a friend who always said, “As quiet as it’s kept…” meaning he would call out the so-called “elephant in the room”; the topic that no one wants to talk about. You could expect to hear…

“As quiet as it’s kept, the only reason they laugh at Uncle Herb’s corny jokes is because he gives good presents.”

“As quiet as it’s kept, everyone keeps hoping Denise won’t bring those crusty, dry brownies to the office parties.”

Wait, what? Yes. Some people feel uncomfortable around people with disabilities. According to a poll and report from the Kaiser Family Health Foundation and a report from Scope, a British charitable organization, the majority of people feel uncomfortable and nervous talking to people with disabilities. Scope’s report specifically says that a fear of saying the wrong thing or appearing patronizing leads to this discomfort.

I can certainly understand how people would feel nervous about offending someone else. In fact, I used to think I’d offend people by asking them to repeat themselves—often three or four times—because sometimes I can’t hear well due to ringing in my ears. And the first time at work that I spoke to someone who used an electrolarynx, I panicked when my ears felt “overloaded.” If you’ve ever talked with me, you know that I’ve gotten over my fears.

Our mission as govies includes communicating and engaging all citizens, whether it’s by electronic means, on the phone, or in person. It’s critical, then, for us to let go of our nervousness and discomfort with people with disabilities. How can we help each other do that?

Since one of the reports indicates that some people responded that they’ve never been around people with disabilities, perhaps watching videos about disability etiquette can provide some of the necessary exposure while teaching effective interactions. The UK government also has useful guidance on inclusive language when communicating with or about people with disabilities.

We should especially reconsider how we use certain terms, including the R-word—retard or retarded—and help raise awareness about its inappropriateness. After being called “retarded” as a child because of my visionless, “floating” eye, I can attest to how disrespectful and painful it is. President Obama even signed Rosa’s Law—which changes the terms “mental retardation” and “mentally retarded” to “intellectual disability” and “individual with an intellectual disability”—into effect.

When we stop avoiding and marginalizing people because of our discomfort, that will have a great effect on improving citizen engagement and, in turn, accessibility. It helps to see how, with accessibility, people with disabilities can live independent and rich lives, like abled people do. The University of Washington’s People with Disabilities and Computer Technology video is a great resource. You can also read about Scope’s End the Awkward campaign or the American Psychological Association’s guide for tips on interacting with people with disabilities.

Thanks for sharing Angela!

I feel like a big step forward for me happened during my college internship with a non-profit for people who have developmental disabilities. Working with our members and taking time to learn about them really helped me to that everyone is unique in their own way. I would say most of my discomfort vanished after that internship.

And thanks for sharing your story, Rachel! What a fabulous experience your internship must have been. You hit the nail on the head with “taking time to learn about them”—I’m certain that’s all it takes to lose that discomfort.

Nice article. We all have disabilities…some are more obvious than others. And we are all people with feelings. If we treat others as we want to be treated, it goes a long way.