Last weekend (31 May – 2 June) was a big weekend for Government 2.0 in Australia, with the first truly national GovHack held across eight locations, including seven of Australia’s eight major states and territories. 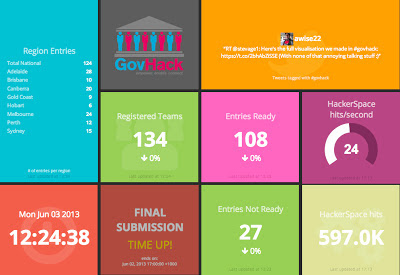 Sponsors included a range of small, medium and large companies and included a number of government agencies, who used the event for inspiration on how open data could be used to generate new insights and improve public awareness and understanding.

I was unable to attend due to personal commitments, however kept an eye on the event remotely via the #govhack tag on Twitter, the event website and the online dashboard (image above).

The event, as anticipated, resulted in some awesome visualisations, tools and ideas – ranging from the visual mapping of immigration to Australia, which put asylum seeker arrivals in proportion; to the creation of jewelry based on open data.

Some awards have already been given out, with others to be decided by Thursday.

A process of public voting for entries is now underway – and you can vote for your favourite entries at http://hackerspace.govhack.org/

However here are my top ten favourite entries this year.

This is an awesome way to visualise immigration to Australia, the type of visualisation that governments should be using to put data in perspective.

Explanation:
A visualisation of all immigration to Australia within 2011-12, created for Govhack 2013. Each dot represents one person.

Data is from Department of Immigration and Citizenship and Refugee Council of Australia.

Vote for it at: http://hackerspace.govhack.org/?q=groups/asylum-seekers-proportion-and-getting-sense-scale

Trove: Open it up

While I don’t care much for the word games, I love the concept of Trove having its own Captcha – which government agencies could use to enlist Australians in crowdsourcing the digitalisation of our national newspaper archive.

The APS Jobs Gazetter takes Australian Public Service (APS) jobs information, drawing from the (PDF) APS Jobs Gazette and presents it graphically by type of job over time, based on search terms entered.

This makes it possible to track the ebb and flow of different job types in the APS, very useful for detecting changing patterns in employment over time that simply cannot be achieved via other APS resources.

It can be difficult to get a clear picture of the Australia’s past – with data spread across many sources and many accounts giving a partial sense of each year.

Australia in review is a useful addition to this area, providing a useful and usable snapshop of Australia in each of the last 40 years – with the ability to expand to provide all kinds of custom information.

Ever been interested in seeing where people come from to visit Australia, or how this has changed over the years?

Explorations in flight provides a 20-year picture of flight arrivals and departures for Australia, showing the rise in travel and changes in origin.

This hack isn’t simply interesting, but important for supporting parents and health professionals to improve the health outcomes for their kids by understanding local issues.

The data is currently only for South Australia, but hopefully will be increased to cover the entire country.

This site provides information for international students on where the best places are for them to stay, relative to the university they are going to attend.

I like it because it fills a need for a group who otherwise might struggle to make the best decision for themselves due to lack of familiarity with Australia.

How can the public critically assess which government agencies are being the most open? For that matter, how can agencies and politicians assess this?

The open index provides a useful way of measuring openness, using a variety of measures and approaches. Agree or disagree with the weightings (and it does need some work – for example more overdue QoNs is not a good thing), it is a valuable approach for providing some kind of comparison between agencies.

Where do my taxes go?

I like this Govhack entry as it demystifies where tax money goes – something that is very hard to get in a snapshot from the budget or any other government information.

This is the type of tool I expect to see from modern tax agencies. The fun facts are a blast too.