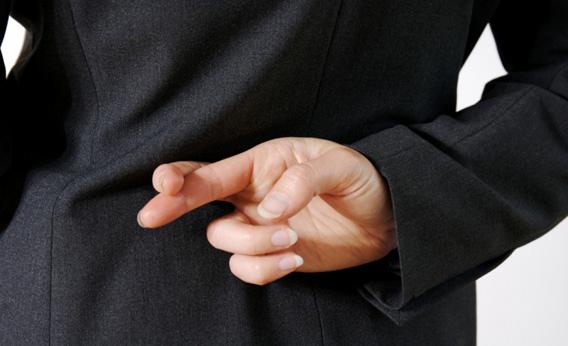 Lying is the new normal. You can call it fake news, alternative facts or white lies but the fact remains, the truth that comes from clarity and honesty has gone the way of the typewriter.

How did we get to this point where spin, obfuscation, denials and counter logic became enshrined as the first commandment of communication and journalism professions?

Think about the number of vocations that produce pay checks on the backs of a job description predicated on lying: (1) televangelist; (2) politician; (3) salesperson; (4) poker player; (5) actress and (6) lawyer. Did I leave anybody out?

Carol Kinsey Gorman of Kinsey Consulting Services reminds us that lying is part of our human history and that all of us do it whether it comes in the form of implicit fabrications or outright untruths.

Who among us has ever?

• Stretched the truth on our resumes or pushed the boundaries of self-evaluation in a job interview?
• Told our partners they look good in that outfit when it actually made them look fat.
• Said to a waitress that our meal was great when in reality it tasted like something from the school cafeteria.
• Suggested we were having a great day to our colleagues as our cortisol levels in our brain leaped off the chart with stress.
• Communicated to our boss that we would be fine with taking that extra assignment along with us on an overdue vacation.
• Took the blame for the misdeeds of colleagues and family members in order to protect them.

David Livingstone Smith in his book “Why We Lie: The Evolutionary Roots of Deception and the Unconscious Mind” theorized that we can’t help but play games with the truth because it is part of our evolutionary past. He claims our ancestors perfected the art of lying as a survival skill. In other words, if you did not develop the skill of deception, you would soon be pushing up daisies. The important point to remember is we are not born with the capacity to lie. We develop it as we negotiate a volatile, uncertain, changing ambiguous world.

Kinsey sites additional research from a Canadian study of 1,200 children from ages 2-17 that proves that lying gives impressionable children an advantage in cognitive development. They consistently exhibit the skill of saying one thing and doing another while simultaneously carrying the truth of the matter in their unconscious minds. The analysis indicated that the older these kids became the more deceitful their falsehoods turned out to be.

To make matters worse according to Kinsey, diversity of personal differences influences telling the truth. Extroverts lie more than introverts and educated people lie more than non-educated folk. Colleagues who obsess about their self-image lie more than people who have come to terms with who they are. The better you are at reading body language the more potential you have to lie since you can read people’s inner thoughts. If you have a great memory, the more you can remember your lies in order to weave more effective ones.

Lying also promotes “what will people think phobia” as we ignore telling the truth or fudge it a little. Robin Dunbar, an evolutionary psychologist at Oxford University claims that pro-social lies commonly referred to as “white lies” can help your career and improve connections in workplace settings.

Don’t worry yourself about lying. As Hank Williams, Jr. says, “we are just carrying on an old family tradition.”

One of the best child-rearing books I’ve ever read is “Why Kids Lie”, by acknowledged world-class expert on deception Paul Ekman (on whose work the tv show Lie to Me, starring Tim Roth, was based).

Ekman notes 3 pre-conditions for deception to becoming a sort of default strategy in children:
1) The child should perceive the costs of telling the truth to be higher than those of lying. (That doesn’t mean there should be NO costs, but they should not be so high as to be a strong disincentive.)
2) There should be low capacity for the parent/s to monitor the child’s behavior, so as to be able to determine whether the child is being truthful or not.
3) The child should experience “success” in avoiding undesirable outcomes by being deceptive.

Put those three risk factors in place, and the odds of the child viewing deception as a normative strategy increase markedly.

Knowing the author of the Canadian study, I’ll amend your characterization of it a smidgen. It’s not that lying is somehow “good” for kids. Rather, doing so effectively (and not criminally), is another opportunity for children to practice the more fundamental skill of intuiting what others think and believe; what is referred to in the research literature as children’s “theory of mind”. There are a zillion ways to hone that same skill that are not egocentrically manipulative, but little white lies, as studied, are appended to that list.

I remember reading about a study sometime in the late 90’s that got one group to evaluate the skill-in-lying of a set of target individuals. A third group then observed the behavior of the first group and rated those same people on their leadership skills. Ability to lie was positively related to perceived leadership ability, but *only for males* and not for females. The findings intrigued the heck out of me, and I wish I knew the reference so I could see whatever came of it. If anyone is familiar with that study, PLEASE post the reference.

Employee Development – Make it a Priority

The Difference Between Nonconformity and Creativity