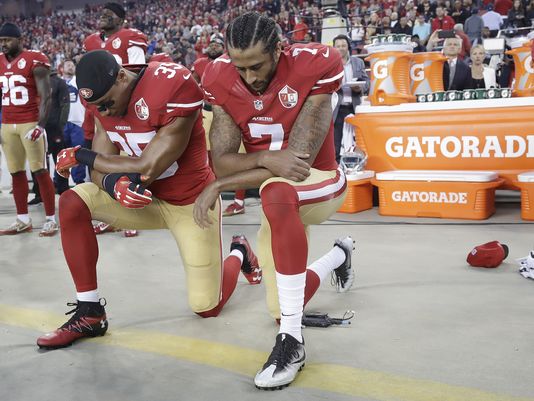 San Francisco 49er football quarterback Colin Kaepernick has resurrected a long standing national debate about patriotism and athletes over the years who have called attention to the hypocrisy associated with our xenophobic nationalism. His refusal to stand for the national anthem has spawn nation-wide objections ranging from social media outrage, loss of commercial endorsements and fans burning his jersey.

What we forget about Kaepernick’s constitutionally protected right to freedom of expression is he is following a long line of people of color athletes who have protested the “Star Spangled Banner.”

He got the debate started by saying, “I am not going to stand up to show pride in a flag for a country that oppresses Black people and people of color… There are bodies in the street and people getting paid leave and getting away with murder.”

Muhamad Ali in 1967 refused induction into the military by saying, “Why should they ask me to put on a uniform and go 10,000 miles from home and drop bombs and bullets on Brown people in Vietnam while so-called Negro people in Louisville are treated like dogs?”

1968 Olympian athletes John Carlos and Tommie Smith raised their fists in a Black Power salute during a medal ceremony as part of the Olympic Project for Human Rights. Carlos said, “A lot of the athletes thought that winning medals would supersede or protect them from racism. But even if you won a medal, it ain’t going to save your momma. It ain’t going to save your sister or children. It might give you 15 minutes of fame, but what about the rest of your life?

Jackie Robinson wrote the following in his 1972 biography, “I cannot stand and sing the anthem. I cannot salute the flag. I know that I am a Black man in a white world.”

In 1986, National Basketball Association player Mahmoud Abdul-Rauf was suspended for his refusal to stand for the Star-Spangled Banner. He pointed out, “The flag is also a symbol of oppression, of tyranny… You can’t be for God and for oppression. It’s clear in the Quran, Islam is the only way. I don’t criticize those who stand, so don’t criticize me for sitting.”

In 2003, in protest of the invasion of Iraq, college basketball player Toni Smith turned her back on the US flag. She complained that, “A lot of people blindly stand up and salute the flag, but I feel that blindly facing the flag hurts more people. There are a lot of inequities in this country, and these are issues that needed to be acknowledged. The rich are getting richer and the poor are getting poorer, and our priorities are elsewhere.”

Kareem Abdul Jabbar, the NBA’s all-time leading scorer, penned a Washington Post article in support of Kaepernick. He wrote, “What should horrify Americans is not Kaepernick’s choice to remain seated during the national anthem, but that nearly 50 years after Ali was banned from boxing for his stance and Tommie Smith and John Carlos’s raised fists caused public ostracization and numerous death threats, we still need to call attention to the same racial inequities. Failure to fix this problem is what’s really un-American here.”

Why would any African American want to stand for the national anthem? A song written by an opponent of abolition and a slave owner himself which celebrates the War of 1812 where the British recruited slaves to join their cause?

The most important verse of “Star Spangled Banner” is the 3rd stanza.

No refuge could save the hireling and slave,
From the terror of flight or the gloom of the grave,
And the star-spangled banner in triumph doth wave,
O’er the land of the free and the home of the brave.

That is something worth kneeling for. Something even Francis Scott Key would agree with.

The Constitution protects freedom of expression from government persecution. It has nothing to do with how others citizens want to judge the expression. The opposing side has the same protections and rights to voice their opinion. It is through open dialog that everyone can start understanding and fixing the problems.

Since when is a bunch of guys in tight pants and pads chasing a ball around supposed to be a “test” of one’s patriotism? I understand when a national anthem is played during medal ceremonies at the Olympics, because the athlete represents their country and they are proud of it. But the notion that a domestic sporting event should somehow be inextricably interwoven with patriotism (and the military; but that’s another thread) just seems bizarre.

So what’s questionable is not Kaepernick’s gesture, but rather the fact that a guy who is paid to temporarily represent a municipal or regional team (until he gets traded and has to represent another) is somehow *obliged* to take a visible side with respect to his patriotic leanings as part of that. He wouldn’t even be able to wait in the dressing room until after the anthem is played if he didn’t want to upset anyone. He is *required* to be on the field with his patriotism unambiguously on display. Or should pro athletes also be subjected to “extreme vetting” so that we’re assured only the most patriotic are out there jumping on each other, getting concussed, and being penalized for roughing the passer (or engaging in domestic violence off the field)?

Unless it’s an international competition, patriotism and sport should be kept as separate as Church and State.

Retired veteran, from Viet Nam to Iraq. There are Marines that returned to Viet Nam after being ostracized here in the U.S. They are the real heroes in my opinion. They died in a blaze of glory. I still feel the pain today as I write this. “What’s goin’ on”, ringing in my brain……

Thank you Mr. Bonnett for touching on this national topic. What if when Colin Kaepernick is kneeling he is actually praying? I think this would trump over standing and pledging to the flag. I get the patriotic zeal of Americans idolizing a symbol, but I don’t get the hands-off sensitivity to what these athletes are expressing. Communication comes in many forms of expression and Colin is clearly letting someone (or everyone) know that this is a concern and he is willing to risk his remaining career and legacy as a human being for what he believes is derelict in America. I am as patriotic as the next person but I don’t become overzealous to the point it blinds me to what goes on in America.

Ok, that American flag is the same flag that gives us the PROTECTED RIGHT to sit ,knee or turn our backs on the flag. Instead of Kneeling, why not do something proactive and positive like sponsor a baseball, football, basketball, etc. team in a black area to help those who can’t afford to participate otherwise? Or sponsor any type of afterschool or school break activity? Football players can well afford to sponsor a kid’s team. Or make sure a “hometown” school has updated books to learn from and a decent school library? Instead of complaining, Do something to help the people they say they are complaining for.
I can’t afford those things, but I have cleaned a playground and repainted benches many times. Try doing something productive to make a change. Complaining only means you want someone else to do the work.

Juana Williams, Are you even aware of the contributions Colin Kaepernick has made? He has donated millions of dollars to underprivileged communities, and he has also committed to donating the record jersey sales to the Black Lives Movement. Also, the flag does not “give” us any rights…it is simply a symbol, and a if you think about it, both the star spangled banner and the pledge of allegiance to the flag (at the times they were written) did not include blacks in the “freedom” or “liberty and justice” each claims to represent. Also, the things you recommended he do to help will not help the situation of black people being killed in the streets by the very same people who are paid to protect and serve them, and receiving no justice for their murders.

To me, personally, at the end of the day – the reverence and respect given to our national symbols and traditions is not about celebrating the “perfection’ achieved here in the US; but rather an acknowledgment that we do, in fact, have it pretty good here in the States.

As the child of mixed parentage – one of whom being a first generation immigrant to the US; I urge folks to speak to members of recent immigrant populations — talk to them of the reasons why they chose to immigrate here… speak to them of their homelands, and their new homes – what they miss most from home and what they appreciate most here now… sometimes, the conversations are very enlightening…

If you have the opportunity, travel as much as possible to other countries and see how the locals live (ie try to stay out of the ‘tourist’ districts)… try to learn the language basics, and interact with the local community…

From my personal experiences – most of the “poorest” (financially speaking) kids I knew, living in the roughest New Orleans area housing projects, had more material wealth than many fairly successful families in many less developed areas of the globe. Unfortunately, their lives were also filled with a street savvy that most Americans will never come to understand.

I guess what I am saying is that as bad as it can be here in the States, generally speaking, it could be much worse….

David LaVeau, I agree with you.

Richard Regan, Great blog! I love a lively discussion like your blog started! Isn’t it great that we live in a country where we can “publish” our thoughts freely to the world without fear of being imprisoned! Angelic Davis, I am a first generation American and I know well the discrimination my father experienced, even though English was his third language and he was smarter than many of the Americans that gave him a rough time. As for your “black lives matter” mention, All lives matter! You are doing the same discriminating thing, saying only black lives matter!

These people are getting an unfair response for kneeling during the National Anthem. This is the utmost show of respect. You would kneel to the Queen of England, you would kneel to the King of Spain. You will always kneel before God (if you believe). Why not bow down for the United States of America National Anthem!! We should all be kneeling in the presence of the most recognized
flag on the face of the earth. What they are doing is teaching us all about honor and respect. I get it. We have come to think of freedom as just “do as we please” without any personal sacrifice or hardship. We as Americans think we are too proud to kneel to anyone or anything but now we have these sports figures making it OK for us to lower our highly over inflated standards and be humble in honoring the United States Of America National Anthem and Old Glory.