In 1977, John Hine took a job in the Information Science Department at Victoria University in Wellington, New Zealand. He was the only person there with a PhD in Computer Science. 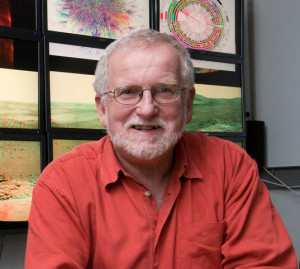 With foresight, skill, and great strategic sense, Hine led efforts to bring a national research network and early version of the internet to New Zealand.

New Zealand became the first nation in the Asia-Pacific region to have a full connection into the US-based internet backbone. Today 93 percent of New Zealand households have internet access.

I met with John Hine this week and asked him about his career and some of the roadblocks he encountered. The following Q&A has been edited for brevity.

The internet opened up new possibilities in communication, research, governance, and social connection. In hindsight it seems to be a no-brainer. Was it difficult at the time to get to get it started?

Yes and no. We didn’t need a lot of startup money. We just needed to run a server and we needed the ability for people to dial into it because everything was run on phone lines at the start. I went to the head of the department and said can you set up this research fund for international email. It was called Usenet News. They just said yes.

What prompted you to ask?

What did this mean for New Zealand?

You have to appreciate how isolated New Zealand was in the mid-1980s. Letters round-trip took three weeks. Air travel was ridiculously expensive, so we got to very few conferences. To just be able to sit and exchange emails, it was like I was having a conversation with somebody. I could foresee that this was going to change the way researchers work, because you would be able to collaborate with somebody in that conversational mode.

What did this early email network allow you to do?

Early on it was a very clumsy system. You determined how often the mail went. If you sent an email to Australia in the afternoon, good chance you would have a reply in the morning. Which today sounds slow, but at the time was amazing. I remember working it out at the time that it cost about 25 cents, each email, which by today’s standards is ridiculously expensive. So we offered a simple service: overnight round-trip for 25 cents. The alternative was you could sent a letter to Australia and expect to spend $1.50 and take two weeks round-trip.

Was it hard to convince decision makers and users to buy in?

The economics of it seemed obvious to me. But even the 25-cents-overnight versus $1.50-and-two-weeks – that was hard to sell. A year into this project we only had six organizations signed up to use it. I hadn’t realized how hard it would be. I thought it was obvious. But since then, I have collected numerous historical examples. Alexander Graham Bell took the telegraph idea to Western Union and the CEO’s response was, “Why would people want to talk to each other?”

Once you had international email, what came next?

In 1989, John Houlker at Waikato University opened negotiations with NASA, who funded a leased line. NASA wanted the United States Antarctic operation in Christchurch joined to the internet. So that was their driver. John convinced them to bring it into Waikato into the university’s network, which was already running. It worked.

So that established the connection across the Pacific Ocean. You had already published a report in 1986, “Research Networks in New Zealand” outlining what some of the next challenges would be. What was your key message in that report?

I think the key message was that this is the wave of the future, but we have got to get a bit more organized. There were four different networking technologies, at seven universities. The message from that report was: Look, most other countries have gotten together under one network. But here we are trying to run three or four different sets of software and it’s costing us a lot of effort to gateway these things together and make it work. I think the real outcome of that report was that people started talking to each other.

Is there a role for government in recognizing the internet as a public good?

For at least a decade now, the government has committed to funding network access for all schools. Administrative education does everything online now. There is tremendous benefit for the students. If you watch the news here you know we’ve got lots of schools with single-digit numbers of students here in New Zealand, so ensuring that they all have internet access is a real commitment.

Was it strange to transition from being an engineer to being just another internet service customer?

I don’t do anything special anymore. OK, I’m a knowledgeable user. I get frustrated if I have to call customer service and I get treated like an idiot. Especially when I have already gone through and done every test I can think of and I’m telling them what’s wrong.

What threats does the internet pose today?

There’s a whole new level of social bullying, and a gang mentality in the social networking environment. But then you stop and ask, am I worried or not? I come from an academic environment that fosters open ideas and we are quite used to reading something and analyzing and thinking it through. I guess the question is are more or less people doing that now than before?

And then you talk about kids spending time in front of screens. I just saw a report on the BBC news about the new electronics ban from those 10 airports for US-bound flights. They were talking about parents complaining about what their kids are going to do on a flight. My reaction was, Give them a book. Read them a story.

Even with the foresight to introduce this technology, did you and your colleagues anticipate how much it would transform how we interact and communicate?

I still have some old books from the 70s and 80s predicting these things, and most of them completely missed where we are. Inevitably, each chapter was written by individual people and each person had their own personal interests with the blinkers that come with it. But in particular, nobody predicted the social networking—the scale of it. And here we are. Who can say what the future holds.

IT Services: Driving Mission Delivery of IT Capabilities, Customer Engagement

5 Ways Your Best Intentions Are Undermining Your Productivity