The Oregon Department of Transportation (ODOT) offers opportunities for all permanent staff to experience work outside their classification. These opportunities are called job shadows, where an employee is able to spend a day with someone of their choosing, upon manager approval.

I went on a job shadow with a Region 2 Project Manager (PM) in Idanha, Oregon. The Project Manager facilitates the Small City Allotment (SCA) program for small cities with a population of 5,000 people or less.

Annually, the small cities have the opportunity to submit an application for projects located on a city or county street within the city limit. The application must address an existing capacity or safety issue on a public road, and are not on a state roadway. The cities must prove in the application that the repairs needed for the project are outside of their financial capability. They must also prove that the repair of the project would increase safety for the citizens that use it. Eligible project costs include: capital construction costs, roadway resurfacing, pothole repair, sidewalk construction/repair, roadway drainage and grate repair, roadway reconfiguration and restriping, signage, and preliminary engineering.

On my job shadow, the purpose of our trip was to conduct an on-site review and evaluation. Idanha is a small town off the 22 highway, just past Detroit. As you enter the town from the west, there is a small market on the left-hand side and Main Street on the right. The speed limit on highway 22 through the town drops from 55mph to 45mph. There is no crosswalk from Main Street across the highway to the market.

The project site in question consisted of two dead-end streets off Main Street that form the shape of an H. While inspecting along Riverside Drive to the West, a couple emerged from their house and inquired about our activities. We learned they were both retired veterans who owned their home. The man came out in a walker, and the woman had trouble moving around as well. They were obviously elderly and had adult children living with them. After we explained who we were and the purpose of our visit, the couple became very excited. They alluded to their daily struggles with getting to the market across the street. They mentioned how scary it was to cross the highway with fast-moving traffic when they themselves couldn’t move very fast. They mentioned how the disrepair of the road caused tripping hazards and made it difficult for them to traverse with the walker. 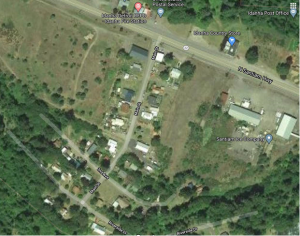 They went on to explain that their transport to Salem, for various medical appointments, was few and far between because of their distance away. They mentioned they would drive themselves if they could, but their health does not allow them to do so. In addition, inclement weather prevents the transport from picking them up at their front door due to the disrepair of the road. So they have to meet the transport on Main Street, which is not a short distance.

In the application, the project would include Main Street, Riverside Drive and 2nd Street – each will be newly paved and roadways widened as possible. The impact the restoration would have on this couple alone would be life altering, as well as the surrounding residents. In lieu of spiking property taxes, which would have other implications on the citizens, Idanha made a great effort in reaching out to their available resources to make a difference for their residents.

The job shadow was very insightful for me and made me proud to be an employee at ODOT. I enjoy knowing that we are working with cities to improve the quality of life of their citizens. The couple stayed in my heart and on my mind for several months.

I recently inquired about the application and received pleasing information. Each application goes to a review team and is scrutinized and compared against 150 others with similar stories. In Idanha’s case, the application was accepted and they received a $100,000 grant for the improvements. They also received the highest ranking! A consultant will be chosen to work on the project after it goes to bid, and they will likely begin construction this 2020 season. The project manager will monitor progress and project completion, including final project review, provide close-out recommendations and recommend approval of final payment once the project is complete – the city has up to two years to complete the project.