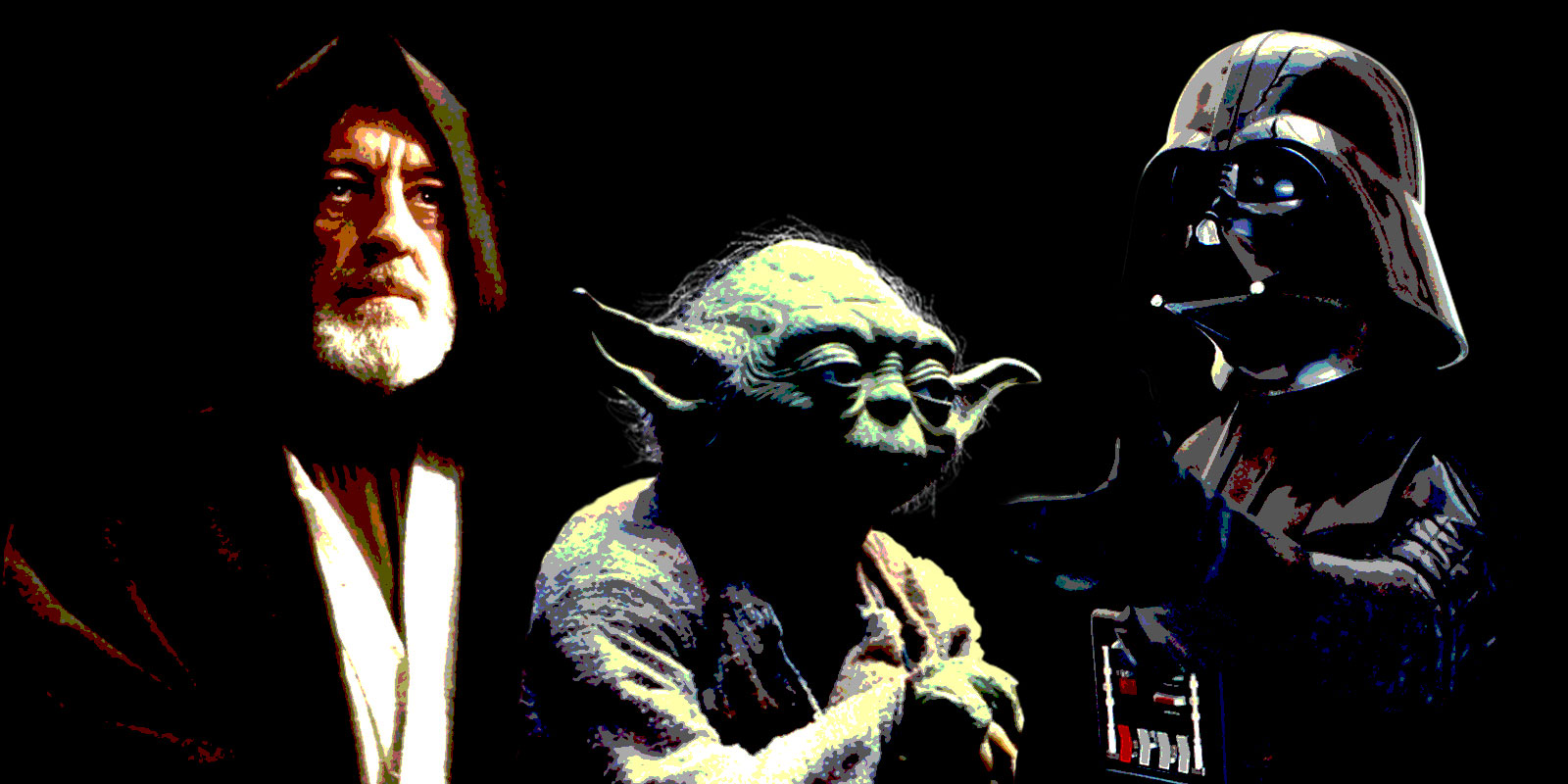 Even though they take place in a galaxy far, far away, there’s a lot to learn about leadership from the Star Wars movies.

Obi-Wan Kenobi, Yoda, and Darth Vader each have a distinct leadership style. Search your feelings to decide whether you’re more inspired by leaders on the dark or light side of the Force.

Warning! If you’re one of the rare people who hasn’t seen Star Wars, you’re in for some…

Obi-Wan Kenobi was a reluctant father figure to the orphaned Luke Skywalker. He was the first leader that Luke followed, offering wisdom to help Luke become a Jedi leader to be reckoned with.

Empower people to think for themselves. When Han Solo calls Obi-Wan a fool after a dangerous moment, Obi-Wan points out that Han is also at fault for following someone he doubted. Believing in someone should not lead you to have blind faith in them. You’re as much to blame when you follow someone who hasn’t earned your trust.

Leaders help people understand how to think for themselves. They empower others by letting them know that they have a choice. They can follow a path or not, or follow a leader or not. Leaders also solicit the advice of others, so that those who believe in them know the reasons why they do so.

Lead with empathy. Obi-Wan knew that several unfortunate past events could be interpreted a variety of ways. There was no one truth. Each person’s experience was valid and, when it came to the history of the Jedi and the Skywalker family, highly complicated.

No two people experience the world in the same way. Leaders know that everyone brings their experiences, emotions, and biases into every situation. Rather than dismissing those influential factors, a leader works diligently to understand and empathize. Empathetic leaders are not judgmental, but instead focus on learning more about other people’s perspectives.

Understand that as the leader, you’re not necessarily the hero. In his dedication to helping Luke Skywalker succeed, Jedi Master Obi-Wan Kenobi let himself be struck down in battle while Luke watched. While that approach was way harsh, it was in line with the Jedi practice of sacrificing self interest for the greater good.

You don’t need to go to such extremes to show your dedication to the people you lead. To let other people succeed, a leader will step out of the way so that other people can step forward.

Even if his grammatical construction was confusing, Yoda was filled with pithy pearls of Jedi wisdom. While Yoda had a sense of humor, more often he was brutally honest because he knew what was at stake. With tough love and tougher training, Yoda taught Luke Skywalker to become a better person and a better leader.

Commit fully and without fear. During Luke Skywalker’s early Jedi training, Yoda had to undo a lot of what Luke had learned. Luke was not dedicated to the task at hand. He easily got frustrated, sometimes giving in to his self doubt with some very un-Jedi-like whining.

Like Yoda, leaders commit fully—to the process, the solution, their team, and themselves. This conviction mindset builds their self confidence and inspires others to believe in them. They may succeed or they may fail, but leaders go all in once they’ve decided on a path.

Mentor the next generation. The Force gave Jedi a lot of powers, but immortality wasn’t one of them. Yoda understood the importance of mentorship and succession planning to keep the Jedi going. Even on his deathbed, Yoda instructed Luke to pass on what he had learned to others.

Leaders are enthusiastic about raising others up. They’ll give their time freely as a mentor, without an expectation of anything in return. Leaders help people find and cultivate their talents, and guide them on their path to greatness.

Be adaptable. In the time of Star Wars, most Jedi could no longer see the future. However, some could still conjure visions that symbolically showed an impression of what could be. While Yoda had a talent for for farsight, he knew that believing that a vision was unchangeable fact was the wrong way to make decisions.

Due to their experience, leaders often have a strong gut instincts about which outcome is most likely to happen. But, a true leader also knows that the future is subject to change and is prepared to adapt when it does.

You can’t deny that Darth Vader’s leadership yielded results. He had a long career at the executive level of the Galactic Empire. Admittedly, Vader’s faults are many. He let his emotions interfere with his work. In the long run, joining the Dark Side was a bad career decision. He wasn’t open to constructive criticism. And he let his drive for power destroy his personal life. However, he was an effective project manager and trusted right hand man.

Get your hands dirty. Even though he was high up in the ranks of the Galactic Empire, Darth Vader would join his forces on the front lines. Even if it meant putting his safety at risk, he’d do what it took to try to win the battle.

Ready to roll up their sleeves, leaders don’t see any job as beneath them. If time or resources are tight, a leader will pitch in to help their team get the job done. This inspires the respect of their team and also lets people know that the work they do has a value.

Recognize talent. Even before he figured out that Luke was his son, Darth Vader knew he’d found someone with unique skills. Knowing that Luke’s talent would benefit the Galactic Empire and his own ambitions, Vader became determined—perhaps a little too determined—to bring Luke over to the Dark Side.

Leaders are always on the lookout for people who can bring much needed talents and passions. They won’t just focus on new people, but will also look to identify and cultivate hidden talent from within. In this way, they use both recruitment and retention to build a team that has all the necessary skills.

Admits when they’re wrong. Though some people feel it was too little to late, at the end of his life, Darth Vader realized that there was good within him. Vader was committed to resolving his conflict with Luke, even if it meant admitting that Luke was right and he was wrong.

Great leaders admit their mistakes. When they’re at fault, leaders will not try to place blame on others. They’ll engage their team in an honest conversation about what happened. They’ll hold themselves accountable and, if necessary, put a plan in place to fix the situation.