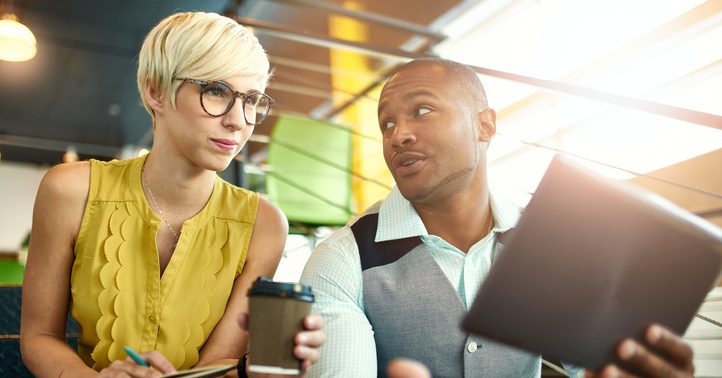 Issue 1: As her organization’s top performer, Michelle was recently promoted to a management role, but her hard-charging tactics are offending her team members.

Issue 3: Carlos’ lack of communication is causing his clients and team members to distrust him.

Issue 4: Indira oversees a team of young professionals who are highly educated but have little experience in their field.

Defined as: “the transmission of evaluative or corrective information about an action, event, or process to the original or controlling source.” (Merriam-Webster)

As an educational strategy, feedback is not only the most effective but it’s also inexpensive, as shown in this graph from the Education Endowment Foundation, referenced in The Economist. 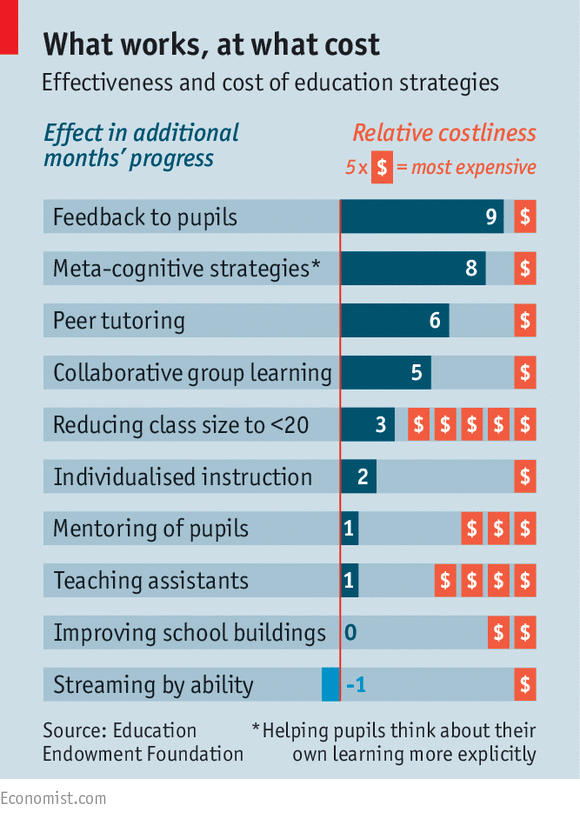 And it’s always available to us, anytime, anywhere.

Yet, it’s an approach we tend to overlook, or maybe avoid. Why?

Getting feedback has negative connotations. It’s come to mean that we’re inadequate or in need of “fixing.”

Giving feedback can feel frightening. So, while we have no problem complaining to everyone else about a colleague’s behavior, we are less likely to tell the person who can actually make the change. We make excuses: “It’s not really a big deal,“ “It’s probably just me,” or “He’ll never change anyway.” Sometimes it’s just easier to send someone to coaching or training and hope they get the feedback they need there. But as one colleague frequently says, “Feedback is a gift.” And a bargain at that. Josh Bersin of Deloitte calls it the killer app. And as I mentioned in my post on professional development, it’s a key requirement for the kind of deliberate practice that improves performance.

Imagine what would happen in your organization if people just knew how to give and receive feedback—the problems that would be solved, the relationships that would be improved, the culture that would emerge.

The good news is that both giving and receiving feedback are skills that can be learned. Here are some strategies for using feedback as a way to improve your own or anyone else’s performance.

Receiving Feedback: Start by reminding yourself that feedback is a gift. Consider that it may have been very hard for the person to come to you. His/her approach to feedback may be awkward. But all you have to do is set your ego aside and Listen. Your kneejerk reaction will be defensive, but avoid acting on that. The most important thing you can do, no matter how loudly your mind is screaming, “That’s not right! That’s not fair!” is to Listen. Respond with a smile and a “Thank you,” then give that feedback time to work in your subconscious mind. After a day or two, you may find the value in feedback you originally thought was off-base.

Giving Feedback: Start by getting in a mindset of respect and caring toward the other person. Set aside any feelings of moral superiority and focus on this gift you have for the other person. Then ask for permission to offer feedback, but avoid using the word “feedback” since the negative connotations can scare off or shut down the other person. One colleague artfully asks, “May I make a suggestion?” This offers respect, a choice, and even a sense of curiosity about what he has in mind. Then state the facts as clearly as you can without making judgments. The not judging is the hard part. We want to say, “You’re not responsible,” when we need to say: “You’ve been late on your deadline three times now.”

The Center for Creative Leadership has a simple three-step process for giving feedback:

So, for example, in talking to Michelle about her relationship with her team members, you might say:

“Michelle, during our weekly team meetings (Situation), I’ve noticed that you frequently interrupt your team members (Behavior). This makes them feel frustrated and not respected (Impact). And you may not be getting all the information you need from them (More Impact). At the next meeting, could you please focus more on listening without interrupting (Request).”

Like any skill, feedback gets easier with practice. It offers enormous potential with little investment. What do you have to lose? Embark on an experiment of feedback today and see what you’ve achieved a month from now.

I’ve been dealing with a marginal employee for a while now. I figured out that the first conversation is the hardest, mostly because I put it off (for all the usual reasons/excuses). Each subsequent conversation has been easier as I can focus on smaller, more specific behaviors and reference back to previous discussions. It still takes some effort (courage) to confront an employee with needed improvement, but it’s truly unfair to all if I don’t.

Tracey, that’s great that you’re stepping out of your comfort zone to do what you know is the right thing. And I’m glad to hear that it gets easier.

Darryl, thanks so much for your comment. It’s definitely a lot easier to write about giving feedback than it is to give feedback. But we all have to keep trying.