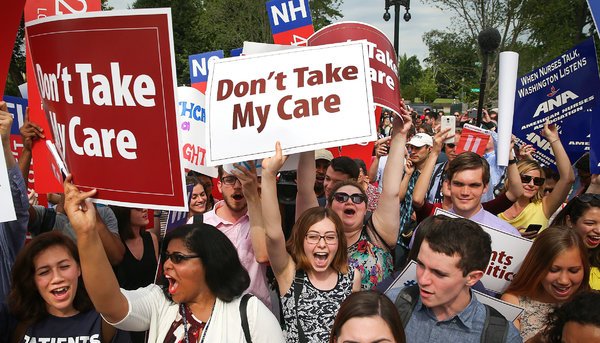 How much do Americans care about affordable healthcare? Just ask President Donald J. Trump and the Republican-led House of Representatives.

How ironic that after voting over 50 times prior to 2017 to repeal the Affordable Care Act (Obamacare), the House recently proved impotent in attempting to pass a similar bill — even with the national media spotlight squarely focused on Capitol Hill. This was a conspicuous failure to secure a simple majority vote in the first big legislative test for the new Republican Congress and President Trump.

One would think that after electing a new president and assuming full control of Congress, the Republican Party (or GOP) would have no trouble repealing and replacing the signature domestic achievement of the Obama presidency — which the GOP has consistently denounced and demonized. In fact, the early so-called “conventional wisdom” in Washington was that such a victory would be the proverbial equivalent to a slam dunk in basketball.

But not so fast.

That’s because all the House Democrats — joined by a handful of Republicans in the self-proclaimed “Freedom Caucus” — expressed their intention to sink the bill if a vote was held. This was a stinging rebuke to the new Administration and Speaker of the House, Paul Ryan, who had to shelve the vote at the 11th hour. Perhaps this unexpected turn of events should not be so surprising after all. Here’s why…

Yes, Obamacare remains controversial despite some initial success. Yet most Americans are wise enough to recognize that tens of millions more taxpayers now have long-awaited and badly needed access to affordable healthcare. There’s also the potent point made by the former president that America now has the lowest uninsured rate in history.

Nonetheless, Americans are still deeply divided on the overall effectiveness of Obamacare in their own lives. These concerns are also being felt by employers, especially small business owners. However, which one of the naysayers out there is ready to give up their own healthcare coverage and pay out of pocket for all medical expenses?

While I’m not an attorney or economist, and therefore won’t attempt to address the legal and fiscal merits of Obamacare, there is still a strong social justice argument to make about the significance of this groundbreaking law. The argument centers on why affordable healthcare should be considered a fundamental freedom and a moral imperative for all Americans, particularly indigent citizens who need it most.

Access to affordable healthcare is more important now than ever, especially as the chasm over income inequality becomes more gaping nationwide.

It’s worth noting that fundamental change does not happen overnight. It takes time and effort. But significant progress has already been made despite a host of legislative and judicial obstacles meant to derail Obamacare.

It’s important to recall that open access to affordable healthcare is commonplace in most modern industrial democracies worldwide.

America could not have continued to be recognized as the greatest global democracy, and a shining beacon of freedom, had we continued to fail in providing basic health security for all taxpayers.

Prior to Obamacare’s enactment, America had already experienced too many decades of partisan gridlock regarding healthcare. This came at the literal and figurative expense of the neediest citizens among us, those who lacked access to basic healthcare services for themselves and their families.

How could the USA have upheld our nation’s long cherished morals and values by leaving Americans who lack basic healthcare to wither on the vines of desperation? Put simply, America’s healthcare system had been stuck in the ditch for too long.

For instance, officials with the Centers for Disease Control and Prevention (CDC) stated back in 2012 that, “The U.S. health system ranks 37th in the world — just behind Costa Rica.”

While Costa Rica is a beautiful place to visit, would you and your family want to move there for healthcare security? What if that was the only way to access affordable life-saving surgery?

If not Costa Rica, then how about Canada or the other 30-plus countries which had healthcare systems ranking higher than ours before Obamacare became law?

Fortunately, that’s a Hobson’s choice no American has to make any longer.

It is not uncommon in American history for groundbreaking laws, like the Affordable Care Act, to be met with fierce resistance at first. Consider Medicare and the Civil Rights Act, for example. Both pieces of landmark legislation went through tough transitions from public scrutiny to public acceptance over many years and decades.

This transition took place from the time the sweeping laws were introduced in Congress, through enactment and national implementation. Medicare was a legislative milestone created by Congress in 1965 via the Social Security Act. The Civil Rights Act of 1964 opened the doors of equal opportunity on myriad levels to tens of millions of Americans who had been left behind due to discrimination. But public acceptance did not come easy.

Similar to Obamacare, opponents of these historic laws predicted gloom and doom for America. Yet, interestingly enough, just the opposite occurred.

As the aforementioned major laws were implemented, their success became more apparent over time. In fact, most Americans came to recognize and accept the intrinsic democratic values and fundamental freedoms provided by Medicare and the Civil Rights Act. This, in turn, helped to make America a better country and a global role model for civil rights and human rights.

Moreover, with the passage of time and the advantage of hindsight, these groundbreaking laws were improved upon by the enactment of critically important amendments. Thus, it’s also likely that Obamacare will follow a similar legislative path of improvement in the decades to come.

If parts of Obamacare are in desperate need of enhancement — as critics are quick to claim — then Congress should mend it, not end it.

The fact is that the sky hasn’t fallen because of Obamacare, despite the demonizing discourse to the contrary. Rather, for now at least, America has a strong universal healthcare foundation in place to build upon.

But the millions of employees who lacked basic health benefits only added to labor costs through increased absenteeism, prolonged sick leave and poor job performance, as well as other economic ramifications for employers.

Thus, as efforts to repeal and replace Obamacare continue, let’s not forget the most vulnerable among us: those living in poverty and despair for whom affordable healthcare was once a pipe dream — including those with mental illness and other pre-exististing medical conditions.

For these downtrodden Americans, Obamacare represents the very freedom necessary to live an independent and more healthful life.

That means the freedom to see a doctor, freedom to receive needed medical treatment, freedom to obtain prescription drugs, and freedom from the stranglehold of greedy and corrupt insurance and pharmaceutical corporations.

The federal government has always had an inherent responsibility to safeguard and protect the general welfare of its citizenry.  Therefore, it shouldn’t be surprising the U.S. Supreme Court has upheld major parts of Obamacare over the years in the face of fierce legal attacks at the lower court levels.

As The Atlantic recently reported in a banner headline: Government Paid for Poor Citizens’ Health Care 300 Years Before Obamacare.”

“There has always been government-subsidized health care in the United States,” reports The Atlantic. “Until just after the Civil War, when state governments took more power, most Americans assumed that their local government would tax and spend to take care of the neediest. They frequently griped about the cost of these expenditures, as complaining about taxes is a long American tradition. But for about three centuries from the beginning of British North America, almost no one thought government-provided health care for the poor should go away.”

Therefore, Obamacare should be mended, not ended.

ABOUT THE AUTHOR: I’m an independent writer and former featured blogger for GovLoop. My work as a strategic communicator spans over 20 years in the public and private sectors — including work in the White House, Congress, federal agencies, and national news media. In addition to GovLoop, you can find me on Twitter, Medium and LinkedIn.

Immigration: The End … and the Beginning

Performance Issues? Here’s One Simple Solution that Can Help Now