What if a performance review had life or death consequences?

In a recent blog post, Dana Skelly and Todd Gregory from the Wildfire Lessons Learned Center described what it’s like to give negative feedback to someone who is not pulling their weight. They also describe why it’s so important to do so. In wildland fire-fighting, if a poor performer rises to a position with responsibilities over the safety of other people, it can lead to injury or death.

“We all have strengths and weaknesses, some of them known and some of them are in our blind spot,” they wrote. “Sometimes it takes an outside perspective to help us realize our potential. But for some reason, we see helping each other in this way as being confrontational or negative. So we avoid giving tough feedback and constructive alternatives—and we end up passing the buck. The easy wrong.”

This avoidance behavior appears to be common. In 2016, the GAO issued a report about performance ratings across the federal workforce. Results from data for the calendar year 2013 showed about 99 percent of permanent, non-SES employees received a rating at or above “fully successful.” About 61 percent of employees were rated as “outstanding” (33.1 percent) or “exceeds fully successful” (27.4 percent). (SES stands for senior executive service, which includes most managerial, supervisory, and policy positions classified above GS-15.) 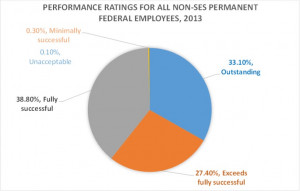 The GAO report prompted an article in The Washington Post claiming everyone in the federal workforce gets rave reviews. If you click to share the Post’s article on Facebook, the link features a picture of “employees” laughing it up on a lunch break, implying that we are gleefully scamming the system.

The Post article has a point, but it did misinterpret “fully successful,” which simply means you met the objectives of your performance plan. It is equivalent to a passing grade, and does not imply a “rave review” by a long stretch.

Nevertheless, to have 99 percent of employees getting a passing grade or better still seems . . . a little unrealistic.

Are we in Lake Wobegone?

But could it be true? Maybe the high marks reflect the fact that federal jobs are very competitive and require demonstrable skills and strong qualifications. Maybe we are only hiring exceptional candidates who decided to work for the government because they see the value of being a public servant.

After all, a good work ethic is not a zero-sum game.

If we are taking care to hire well-qualified, competent workers, we could expect that a large proportion of the workplace would perform at least satisfactorily. Someone who is completely failing on the job should be a rare event.

But we aren’t all above average. People are people.

The “we only hire the best” argument could explain some of this performance rating distribution, especially in the “fully successful” category. But for a full third of employees to rate “outstanding”? That begins to look more like the grade inflation that is happening in colleges and universities.

The GAO report acknowledged that the distinctions between rating categories were losing their original meaning and that we might need to re-calibrate. “A cultural shift might be needed among agencies and employees to acknowledge that a rating of ‘fully successful’ is already a high bar and should be valued and rewarded and that ‘outstanding’ is a difficult level to achieve.”

Bring on the tough feedback.

If everyone is a winner, we lose growth potential, credibility, and overall office morale.

Fixing performance review grade inflation requires supervisors to rally their inner strength and give difficult feedback and counsel someone who is struggling. But it also requires employees to be willing to take the criticism – in fact, to ask for it.

As the wildland fire-fighters’ blog post put it, “Not being able to take and receive critical feedback is a fundamental flaw in our ability to realize our potential as a learning culture. If we do not add this practice to our training and day-to-day behaviors, we will always be limited.”

How is this playing out in your job?

A much needed article Rachel! Thank you!

Great article, but can we get retire the term “snowflake”? I think most of us out here are truly motivated by our jobs and trying to do the best we possibly can. If management is artificially inflating our reviews, that’s one thing, but putting that label on the line workers reinforces the stereotype that gov workers are just out here ‘cruising on the public’s dime’. That characterization discounts the passion and dedication that I have found throughout government staff, from the local to the fed level. We’re not all here looking for gold stars just for showing up, but it is gratifying to have hard work duly rewarded in your performance review, and also to get that kind of constructive feedback that helps us identify where we can get even better.

Hi Michelle, thanks for the comment. I appreciate the sentiment. My intention was not to label government workers, but the performance review process itself as overly cautious and “snowflaky.” Denying us constructive criticism does us a disservice too. I agree with you that most of us truly care about what we do. Particularly those of us on GovLoop. 🙂 Thanks again for reading!