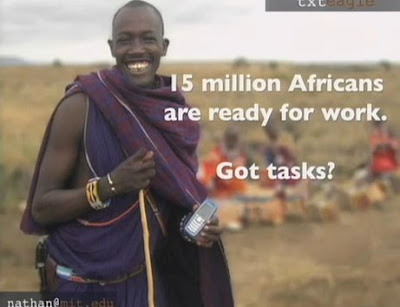 I posted recently about mobile developments in Africa and how they are being used in a number of imaginative ways – many of which which we’re yet to see in the ‘West’!

As well as being used to organise day labour they’re also used by people to do small jobs such as translations. In Kenya, with its many languages, this is how help resources for mobile companies’ customer services are being built – word-by-word 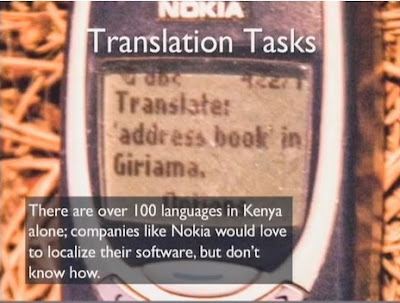 It derives its name from the word sama, Sanskrit for “equal”.

Their partners must meet stringent social impact criteria – fewer than 20% of applicant firms are selected – and they specialize in services ranging from data entry to advanced software and website development.

It’s about giving work, not aid to people in the world’s poorest countries.

Here’s a profile of Ann Wangui, a graduate with honors from Nairobi’s Methodist University. She is an example of the sort of person who is struggling to find a job in Nairobi despite her qualifications and who Samasource aims to help.

This is certainly a much better approach than the one being adopted by the world’s large tech companies. Erik Hersman recently posted Microsoft vs the Open Source Community in Africa.

If Microsoft developer communities do emerge in Africa, Erik writes, even with the massive hurdle of paying for expensive access to developer tools, “we’re still left with what one person wrote: …they will be formed from programmers who are completely dependent on American software for the livelihood: it’s neo-colonialism, pure and simple.”

In Africa organizations have a lot of hurdles to overcome, not least of which is the straight cost of doing business. Where it might be simple for some organizations in the US and Europe to wave off a couple thousand dollars worth of licensing fees, the same is not true in Africa. The margins are lower, so every cent counts.
In a region where cost is so important, it’s amazing then that the most lucrative deals go to the Western organizations that have high costs for ownership and maintenance. These outside organizations use backdoor methods to gain contracts where in-country options are available, usually with less expense and with greater local support.

Hersman also reports that Microsoft are trying to muscle in on the African-developed Ushahidi crisis reporting social software with a new product called Vine. He says “if they really are about creating emergency and disaster software for use by normal people, then I would encourage them to not charge for it and to make it as open as possible for others to work with it.”
Fat chance, I suspect.