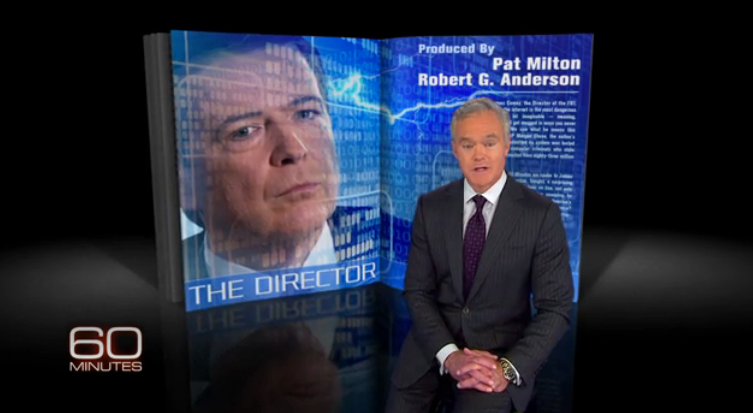 But up front: 3 insights from the FBI director

The director of the FBI James Comey was on CBS’s 60 Minutes over the weekend talking about privacy, electronic surveillance. It is a interesting and frank interview.

CBS’s 60 Minutes with the FBI director

Some insights based on that interview:

1. The big concern is still terrorism, not cybersecurity:

Scott Pelley: When the phone rings in the middle of the night, which I’m sure it does, what’s your first thought?

James Comey: Something has blown up. Yeah.

Scott Pelley: It’s terrorism that concerns you the most, even after what we said about cybercrime.

James Comey: Yeah, I think that’s right because it’s terrorism that can have the most horrific, immediate impact on innocent people  In the age of terrorism the budget of the FBI has doubled, adding capabilities like this reference library for bombs. Since 2003, they’ve analyzed 100,000 bombs sent here from 40 nations. From blasted remains, like this circuit board, they can piece together the ‘what’ and the ‘how’ that leads to the ‘who.’ It’s just some of the 21st century technology that is transforming the 106-year-old bureau.

2. Cyber-security is still pretty important to the FBI these days

The FBI is spending a lot of its time online these days. This is a new cybercrime headquarters that the public hasn’t seen before. We agreed to keep the location secret. They call it “cywatch” and it pulls in resources from the CIA, NSA and others. Comey’s agents are running down leads in the theft of JPMorgan’s data. Often in cases like that the suspects are overseas. So the trouble is, in cyberspace, where do you put the handcuffs?

James Comey: It’s too easy for those criminals to think that I can sit in my basement halfway around the world and steal everything that matters to an American. And it’s a freebie, because I’m so far away.

Oversight and accountability is difficult. That is particularly true in the law enforcement environment. Corney highlighted one area where he believes the FBI went astray: Tracking of Martin Luther King Jr.

Scott Pelley: James Comey keeps this memo right on his desk to remind him of what the bureau shouldn’t do. Marked “secret,” it’s a 1963 request from FBI Director J. Edgar Hoover. Titled, “Martin Luther King Jr., Security Matter – Communist.” Hoover requests authority for “technical surveillance” of King. The approval is signed by Attorney General Robert Kennedy. And there was no court order. It was the signature of the FBI director and the signature of the attorney general?

James Comey: Yep. And then open-ended. No time limit. No space restriction. No review. No oversight.

Scott Pelley: And given the threats in the world today, wouldn’t that make your job so much easier?

James Comey: In a sense, but also in a sense, we would give up so much that makes sure that we’re rooted in the rule of law, that I’d never want to make that trade.

James Comey: The lesson is the importance of never becoming untethered to oversight and accountability. I want all of my new special agents and intelligence analysts to understand that portion of the FBI’s history, the FBI’s interaction with Dr. King and draw from it an understanding of the dangers of falling in love with our own rectitude.

The Data Goldmine for Federal Government

The Government is What You Make of It