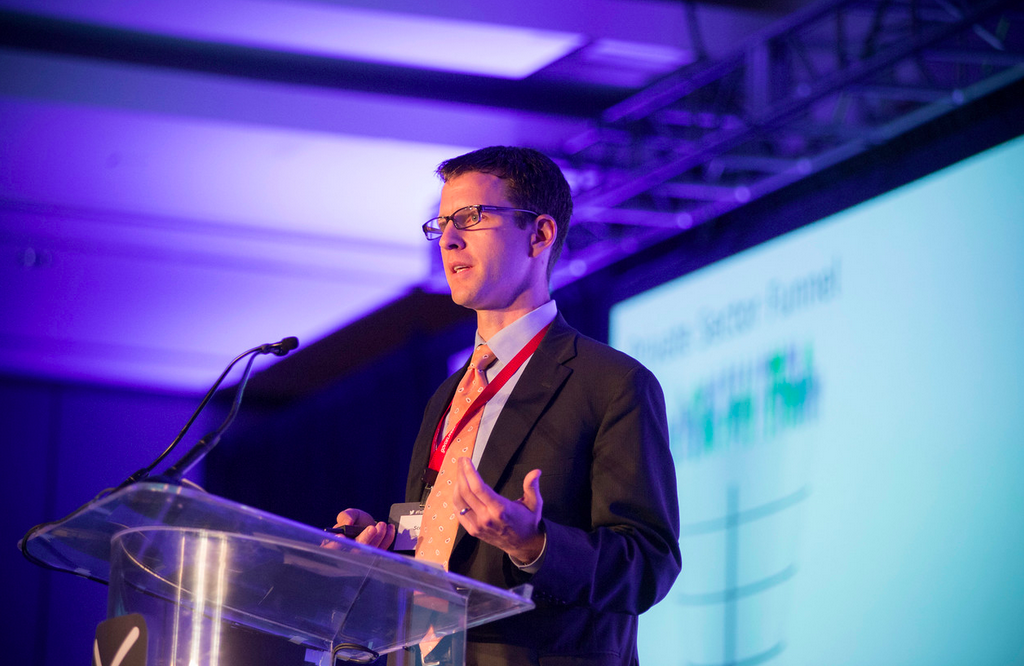 “You are clearly not intimated by ‘big’ if you work for the federal government.”

That’s how Scott Burns, CEO and founder of GovDelivery, kicked off his keynote at GovDelivery’s 8th Annual Federal Communications Summit on Tuesday. Burns pointed out that people had always told him not to take on federal clients — they were too big to make a difference, too big to make an impact, too big to drive change.

“All of you in this room are proving that wrong,” Burns said. “And data is the biggest tool you have available to you to get your arms around the behemoth that is federal government, and get things down to the individual level. My job is to talk you through the goldmine you’re sitting on with your government data, and how to convert that data into real results.”

Burns went on to talk about the private sector marketing “funnel.” “At the top of the funnel,” Burns said, “there’s always people. It could be your online audience, or the people who come to the coffee shop you’ve started. Then at the bottom of the funnel is usually something people are buying. If you’re Delta, it’s plane tickets. If you’re Amazon, it’s books. If you’re Starbucks, it’s coffee. But the main point is it’s always cash at the bottom of the funnel. Cash is what drives innovation in marketing.”

The public sector funnel, though, said Burns, starts the same — with people at the top — but has something considerably different at the bottom.

“Throughout the funnel, you’re whittling down into an action at the bottom,” Burns explained. “Flu shots are the action if you’re HHS; it’s a train pass or a ticket to see the game if you’re BART; or  if you’re in Minnesota it’s snow emergency services. We spend a lot of time defining what’s at the bottom of the funnel. What do we really want our stakeholders to do?”

The simple answer? Most federal agencies want their customers (aka their constituents) to take action. “Getting people internally, and externally, to take the wider actions you want will make things run better and make a better life for the people that you serve,” said Burns. “And that’s what organizes the public sector funnel – it’s better lives for more people. That is the fundamental point of public sector organizations. It’s not as simple or nice sounding as cash — but there’s a lot to it.”

So how do you get people to take actions so they can have better lives? Burns said it was about using the data available to you in order to get your message out in a more effective manner.

The GovDelivery network, in particular, stores massive amounts of useful data about their network that can help you expand your funnel at the top — essentially reaching more people — and then narrow down the funnel to get more people to take actions. Using the GovDelivery network, data, and cross-promotion abilities, FEMA increased their reach and audience by 110%; DoD increased by 250%; and HHS by 88,000 people.

As for how the public sector should approach the marketing funnel, Burns explained that it came down to five steps:

“The actions are the kind of things that break down from the zeros and ones to the real impact on people’s lives,” Burns said. “Stuff like getting people to read to their kids, to cook healthier meals, to sign up for a grant program, to sign up to start a small businesses. Data changes everything because it leads to better lives for more people.”

Added Burns: “If the purpose of big data is just to help Amazon sell more books, it’s not that exciting. But if it leads to better lives for more people, that’s what I care about.”

[…] following post is from GovLoop, The Knowledge Network for Government, run by Actua Company, GovDelivery.  This […]

Stick to the Ohh/Aah Principle

DorobekINSIDER: 3 Insights from the FBI Director