To kick off this series we sat down with former Federal Chief Information Officer Tony Scott. He’s been busy since leaving the White House in January.

We sat down with Scott at the Squire Patton Boggs office in D.C. to chat about the impending passage of the Modernizing Government Technology Act (the president has since signed the MGT Act into law), CIO turnover in government and his career lessons.

GOVLOOP:  So what was your transition like coming from government back to the private sector? 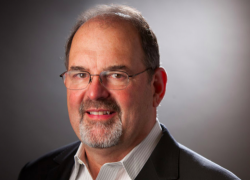 SCOTT: I spent about six or eight weeks just sort of unwinding, sleeping late and enjoying the benefits of that. But also behind the scenes I’ve been really focused on trying to get momentum going on modernizing government IT. A lot of the things I’ve been doing in my spare time is continuing to talk to people on the hill and staffers — people who have the ability to move these things along. I’m a big fan of the MGT Act. It’s one of the important steps that’ll help modernize IT in the federal government.

GOVLOOP: How closely do you feel that what we’re likely to see aligns with what you were thinking of initially?

SCOTT: I think it follows pretty closely. Originally, we asked for $3 billion, and we got a little less than that, but I’m OK with that. Even if we had gotten the $3 billion somehow, we would’ve started with some smaller projects to test the process and make sure we had all the kinks worked out of the implementation. I think with $500 million you can do that and not jeopardize the idea.  Then hopefully, with some success, you can go back and get more money later on, or recycle the money you have in different ways. And that was always a part of the design of this.

I think the big deal is breaking this annual appropriation cycle where you can start to get CIO’s and their teams thinking more strategically, thinking about the business case, engaging with the other leadership teams in the agency to come up with a broader strategy, versus the stop-start, stop-start turnover that we’ve been in.

GOVLOOP: Once the MGT Act becomes law, what do you think are the biggest challenges culturally and technologically that agencies are going to have to face?

SCOTT: The world of digitization is all about the customer. What does the customer want to do? What information do they need? So I was encouraging the CIO’s to think outside their agency, to look at common needs and common business cases. Case management is a great example. Today there are thousands of custom-built, one-off case management systems in the federal government. Instead of everybody modernizing their case management system and doing a lift and shift into the cloud, what we could do is say there’s a core case management capability that we can build one time in the cloud with an API that would let your agency customize it. But the underlying platform is still all the same basic nuts and bolts. That would be really powerful because then you could have much more efficient data interchange and a much better customer experience.

GOVLOOP: You’ve been on the inside. Do you think that is possible? Could it happen?

SCOTT: I think so. Part of what we intentionally did is said, ‘If we get the [modernization] fund going, let’s look for those use cases.’ Another one is grants. Grants are just a form of case management with a different flavor.

GOVLOOP: How has a past failure shaped you? What lessons did you learn?

GOVLOOP: How did that experience shape you?

SCOTT: I was on the side arguing we should put Bluetooth in. But I didn’t realize at the time who I needed to go influence to really get that decision changed in the way that I thought it should. I thought I could naively go into a meeting and say, ‘Here are the facts,’ and that the decision would get made in the meeting. Well, in most organizations decisions get made well before you get into the meeting. There’s all kinds of seasoning of the steak that takes place well before the steak gets cooked. I learned that you have to go around, talk to a whole bunch of people, get their input and develop your arguments. It has to be a community decision. You have to pay attention to those things or you’re probably not going to be successful, no matter how good the idea is, especially in government.

GOVLOOP: How do we get more CIOs in government to not only come but to stay?

SCOTT: I’m not sure they should stay a really long time. I’d advocate for more than two years. I don’t know that you’re ever going to get to the place where you have 10, 15 or 20-year tenure in a role. But I would favor doing things to make sure we don’t have the kind of turnover that we have today. You could dig through a whole bunch of things like fixed-term appointments or incentives for good performance. I think it is important to have some sort of continuity over time. Corporations that have high turnover of executive staff generally don’t do well.  The ones that you see succeed have some tenure but also some constant refresh. And that’s a model that I like.

Glad you enjoyed it, Maryanne! I’m excited about this series, and I’ve already learned a lot. The NYC CIO would be a great fit. I will definitely reach out. Thanks!

Retaining Women in Your Workforce