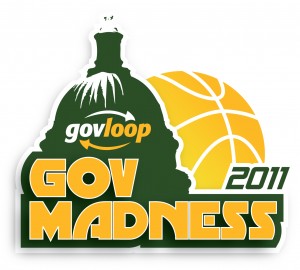 First off what is GovMadness: GovMadness is a crowdsourcing competition hosted on GovLoop to determine which gov’t city or federal agency is the most awesome via your votes. The competition is set up to replicate NCAA march madness. It’s pretty awesome and you can win stuff so you should probably participate.

Every few days or so we’ll update you on the match up and who is moving closer to the title.

Here’s how things stand now: Voting for the 1st round match ups is underway (Vote now and make sure you’re favorite moves on). The most intriguing match up of the first round is a battle of heavyweights: Dept. of Education vs. Dept. of Commerce. Right now the two are splitting the vote at 50 percent each. It will be interesting to see who squeaks out the victory on Friday.

On the local side all the match are currently going as expected except for New Orleans leading over Phoenix. I guess people just like to party more than they like the desert.

So far we’ve received over 230 brackets and have a total of 47 different agencies or cities picked to win it all. That’s a pretty diverse field!

Some of the early favorite include:

Here’s a few of the big underdogs so far (help them out with your vote!)

LA is an underdog?! Come on people!

I’m with Candace. SF and State are my championship game! Can’t let those number 1 seeds boss everyone around…

I love SF but I really think San Diego should win.

US DOT. Great Blog by the Secretary, called Fastlane…. timely, informative and engaging… and excellent Twitter from @raylahood. Definitely underdog, but effective…. gets my “awesomeness” vote!

Open Data Around the World – Thoughts From France