Sometimes, the hardest part of work is not the work itself: It’s dealing with colleagues and managers who make the office, whether in-person or virtual, an uncomfortable place.

But there are tools that can make it easier for you to overcome that hurdle — to genuinely participate in meetings, share ideas freely, ask questions and even make a mistake without fear.

During Tuesday’s NextGen session entitled “How to Create Psychological Safety in the Workplace,” GovLoop heard from Lorie Reichel-Howe, founder of Conversations in the Workplace, who helped attendees from all levels of government understand how to foster a more supportive office environment.

For new employees and managers in particular, finding that comfort level can be transformative.

Culture is not measured by the values posted on the office bulletin board, Howe said. It’s measured by behaviors, by how employees and supervisors interact with each other and conduct business during difficult times.

And when conflicts arise, employees tend to have one of three reactions: freeze, flee or avoid the situation, or fight back.

The most common types of fighting back, Howe said, include:

None of these approaches is particularly helpful, of course.

How to Have a Safe Conversation

Howe laid out a hypothetical scenario to show how people should respond in difficult times. It goes like this: An employee felt hurt and disrespected during an office meeting and now initiates a positive, productive conversation with the challenging coworker. The goal is to address concerns and chart a better path for the future. 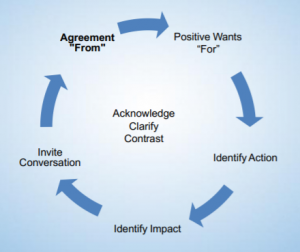 Here’s How to Begin:

Example: “I want us to have a positive working relationship and to have open and honest conversations that support each other. So to support us in successfully working together, I’d like to talk with you about something that happened during today’s virtual meeting.”

Example: “During our brainstorm session, while I was sharing my suggestion of an employee recognition program, I heard you jump in and say, ‘Too complicated, next idea!’”

Example: “Hearing you say this, I felt interrupted and shut down. It came across to me like you were not interested in hearing my ideas.”

Example: “I’d like to hear your perspective on what happened. I’d also like us to discover a way to respectfully voice concerns with each other. Please share your thoughts.”

Now, Listen to Your Coworker:

Example: “What you don’t know is that the last time we implemented a recognition program, it failed big time. Managers complained that it was too cumbersome. Instead of building a positive culture, the outcome was negativity.”

Example: “Okay, now I understand your concern given negative past experiences. I believe it’s possible to identify what was lacking in the earlier program, to make needed adjustments and implement a manageable program that results in positive outcomes.”

Example: “May I count on you to hold off on evaluating my ideas until I’ve had the opportunity to describe them?”

Listen to Your Coworker (Again):

Example: “That’s a fair request. Yes, no evaluating until you’ve had time to share your ideas.”

Howe said that seemingly small things — like saying “I noticed that” rather than “You did” — can be helpful because you adopt a less aggressive posture.

The reality, though, is that workplace challenges are unavoidable, especially since people usually spend more time interacting with their work families than with their families at home. “Conflicts are natural occurrences in every human group,” she said.

Photo by Amy Hirschi on Unsplash

Meeting Your Agency’s Need for Speed