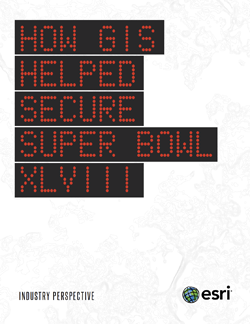 This industry perspective tells the remarkable story of collaboration and technology that kept tourist and residents safe during the Super Bowl, including the technology solutions provided by Esri and PenBay that were deployed during Super Bowl XLVIII. We also feature interviews with:

The Fire Department of New York (FDNY) is tasked with protecting New York City’s 322 square miles and over 8 million citizens. If this mission alone wasn’t big enough, in 2014, the most televised and popular sporting event in America, the Super Bowl, came to MetLife Stadium as the Denver Broncos faced the Seattle Seahawks.

For most of us, the Super Bowl is a one-day event where we gather with friends and family to watch the game. But for the FDNY, the Super Bowl involved months of planning and preparation. The FDNY was faced with the mission-critical task of preserving the safety of NYC residents and thousands of tourists coming to NYC for the game.

For the FDNY, the Super Bowl presented many security challenges. But thanks to emerging technology, and fast deployment options, FDNY had the people, process and technology in place to retain security during the event.

Leading up to the game, there were nearly 300 events requiring public safety attention. These events spanned 200 square miles and crossed two states, 15 counties and 22 cities. And since many of the events were part of festivals or temporary environments, officers had to operate in new kinds of environments.

One of the most important and highest trafficked areas was Super Bowl Boulevard. For a five-day period, this temporary thoroughfare spanned from 34th to 47th street on Broadway, and was the epicenter for the fan experience during Super Bowl XLVIII. Super Bowl Boulevard had countless events, high-profile guest appearances and tourist foot traffic.

Leading up to Super Bowl XLVIII, FDNY partnered with PenBay Solutions and Esri to develop a new solution to help address the complexity and volume of these security challenges. FDNY leveraged the InVision platform from PenBay, adding the Event Planning Module to support the creation and approval of Even pre-plans. While FDNY had used InVision previously in their Operations Center, this new module brought an additional set of planning capabilities for use throughout the Department and with partner agencies.

FDNY also used ArcGIS Online, powered by Esri, to deliver approved pre-plans and intelligence data via maps and mobile apps that could be shared anywhere, anytime. FDNY was able to deploy a mobile solution to help inform field users, making information readily available whether accessed on a tablet, desktop, browser or smartphone.

Leveraging InVision and ArcGIS Online, the FDNY was able to quickly plan out operations throughout the week, and ensure the safety of thousands who came to NYC to watch the game. This solution brought a whole new dimension to planning and operations personnel across the City, providing a cross agency view of up to date information. “the thought leadership of FDNY and the strength and versatility of InVision came together to effectively address the complex safety and security challenges of not just the Super Bowl itself, but for all the events during the week leading up to it ,” said Benton Yetman, Director of Solutions, PenBay.

Download PDF or read above to learn more, or watch a video on how Esri and PenBay secured the Super Bowl.