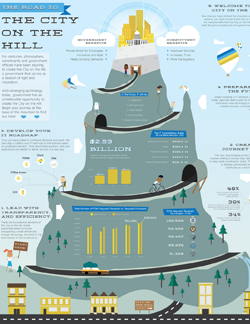 “Today the eyes of all people are truly upon us—and our governments, in every branch, at every level, national, state and local, must be as a city upon a hill—constructed and inhabited by men aware of their great trust and their great responsibilities,” President John F. Kennedy.

The City on the Hill metaphor has been used in politics, literature and religion as a means to inspire people to build a city which other communities look to emulate. As public servants, we are constantly yearning to create this City. Government institutions on the path to creating the City on the Hill have not only created a culture of openness, transparency and efficiency, but have also implemented the right technology and tools to support these initiatives. City leaders and employees understand the role of the public servant in a modern context, and work diligently to improve their communities through sound leadership and technology.

Through emerging technology, agency leaders can transform their agencies into modern institutions, equipped with the tools to meet the complex demands of the public sector. Our infographic explores how government officials can travel up the mountain to build the City on the Hill.

This infographic is part three of four part series (part four to released this fall) with Hyland. The infographic series shows how ECM is one of the foundational tools being used to transform government. We’ve talked about ECM as the engine that powers government, described how ECM is transforming the public sector through efficient document management, and today GovLoop is showing how ECM is one component creating the City on the Hill.

OnBase is a proven enterprise content management solution for each level of government, helping each meet today’s challenges of smaller budgets and staffs while laying the foundation for simplified, efficient and mobile government information technology. To learn more, visit Hyland’s resources page on GovLoop.