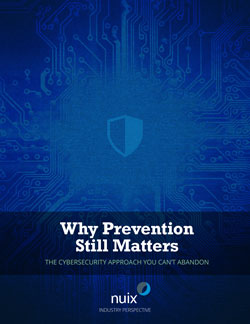 The recent breach of Office of Personnel Management data affected 22 million records, but its ramifications are, in fact, even more far-reaching than that. Media coverage of the event ensured that many more people worldwide are aware of the U.S. government’s cybersecurity shortcomings and those people are demanding a swift response. It’s in this very public environment that cybersecurity professionals find themselves in today, forced to shift their focus from proactively securing the infrastructure to incident detection and response.

It’s also in this context that a dangerous precedent is emerging, one that preaches the idea that because security measures aren’t foolproof and cyberattacks will happen, it’s more important to focus on reaction than prevention. The reality is that skimming over and skimping on prevention will only lead to more breaches. The statistics back this up—federal network cybersecurity incidents were up 15 percent in fiscal year 2014 compared with the previous year, according to the Office of Management and Budget.

GovLoop teamed up with Nuix, a company that produces a software platform for indexing, searching, analyzing, and extracting knowledge from unstructured data, and provides tactical solutions to complex business problems on this report to dive deeper into one of today’s hottest topics: cybersecurity.

To understand its complexity and then simplify it, we will look at:

The fact is, cybersecurity is not merely a trend. It’s crucial that employees both within and outside the IT department understand the evolving threat landscape and ways to secure against it.