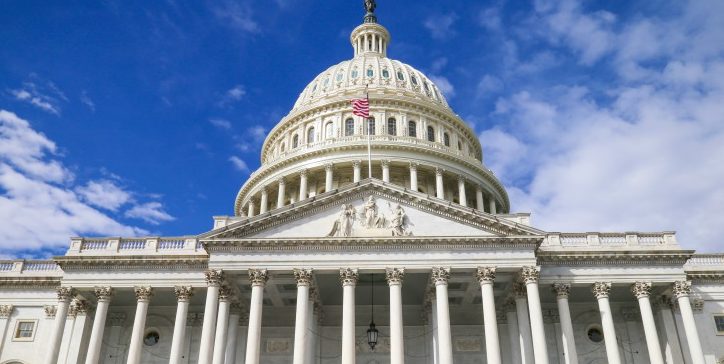 The 21st Century Integrated Digital Experience Act (IDEA) was signed into law on Dec. 20, 2018 to bridge the gaps in the modernization of government agency technology and previously non-digital, paper-based processes. Rep. Ro Khanna, D-Calif, who introduced the law, described an indicator of success in IT modernization as “the American citizen feeling that there is no difference between interacting with the private sector and government.”

So what does that entail for government agencies?

Olson spoke first about how technology capabilities that agencies leverage must be ubiquitous to better connect with citizens. “Most citizens expect technology to be readily available, easily accessible and easily meet their needs,” Olson explained. “Many processes are paper-based and barriers to efficient service delivery. The need for digitization has never been greater.”

Everyone benefits when technology is leveraged to reduce costs, improve savings and deliver better services to citizens.

Additionally, Olson asserted that “public trust improves as citizens have positive interactions with their government.”

A recent Accenture survey brought up by Olson noted that 58 percent of citizens are satisfied with the quality of services they receive from the federal government. Eighty-five percent say they expect the same or higher quality services from government compared to the private sector.

If that’s not enough of a driver to embrace digital services, “antiquated technology is costly to maintain and poses threats inside and outside the firewall,” Olson stated.

Some common agency challenges include:

According to Olson, “an efficient government ensures that citizens don’t have to spend as much time or effort requesting the services they need.”

Gaining momentum to create an integrated digital experience through service delivery is also important across government. That momentum can be accelerated by considering the following priorities: 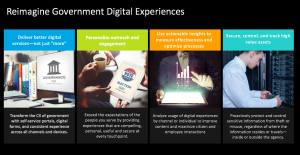 Here’s an implementation timeline based on the 21st Century IDEA: 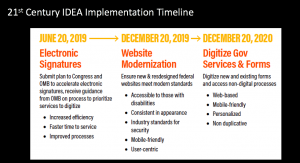 Winship pointed to the necessity of having a modern interface on the USCIS website, which has more than 20 million website visitors each month and over 350,000 visits each day.

“Our team is very mission-driven,” Winship said. “We look for certain skill sets and to the best partners. We’re agile and user-centered, and we use those methodologies in our design work.”

The agency’s goal, according to Winship, is to create more efficiency by allowing individuals to self-service. “We’re allowing for greater transparency and taking some of the weight off of our officers,” Winship stated. “The goal is to create that 360-[degree] view and help people interact more naturally with USCIS.”

USCIS has been identified as a high-impact service provider, so there are certain standards that they have to commit to. According to Winship, there’s always room for improvement.

“Being in government, we all have rules, regulations and compliance factors that influence our decision making, but you do need to find your comfort level with risk,” Winship advised. “Balance that risk with what makes sense, and always look for executive support wherever you can find it.”

Benett highlighted that “most interactions with governments require forms and documents and signatures, which are all often ignored as part of the customer experience.” He pointed to many success stories of how Adobe has been used in different modernization efforts. Two examples include:

Working with executive leadership is crucial to driving change, according to Benett. He outlined the below questions for employees to consider when making the case to management:

How are you driving digitization in your workplace? Let us know in the comments below.

The 21st Century IDEA Act is very exciting, I was logged into the webinar and the speakers gave a lot of informative advice and stats throughout and this blog post does an excellent job or recapping! Thank you for this!