In the private sector, you wouldn’t join a new company without first looking at their workplace culture, right? Of course not! You want to be happy, supported, and provided with opportunities to grow, so you do your research before accepting an offer.

However, you might think of government – particularly the federal government – as a different beast. What’s the difference between working at DHS and working at GSA? It turns out, a lot. Especially if you’re a woman.

Just as you would in the private sector, it’s important to learn the reputation of each agency you consider before signing on the dotted line. Find out how happy other women are at the agency, what sort of support programs are in place for women, and how the agency compares to others in government.

But how do you find that information? Unfortunately, agency rankings aren’t as robust as they are among private companies and, where they do exist, they don’t always highlight women’s concerns specifically. However, on the federal level, there are two resources that can give you an idea of how happy women are in their agencies.

Called FEVS by most people, this annual survey by OPM polls more than 400,000 employees on a wide range of issues, including those impacting women specifically. Last year, OPM even created a unique report to analyze women-specific data from the survey though it did so on a macro-level, considering all agencies as a single entity.

To get agency-specific information takes a little more digging. Let’s take a look at this year’s report. First you can look at individual agency responses if you want a granular look on at how each agency’s employees perceive the culture, processes and opportunities of their workplace.

However, I would take a slightly broader and less time-intensive approach. OPM created New Inclusion Quotients (New IQs) to collectively analyze certain issues. The Index Trends for “Open” – which estimates to what extent management supports diversity – is a combination of responses to four statements:

When you’re looking for agencies that are more supportive of women or minorities, start at the top of this list. This year, NASA leads the large agencies by 7 points, with an index score of 76. Coming in second in 2015 were the General Services Administration and the Nuclear Regulatory Commission.

Among small agencies, the U.S. Trade and Development Agency leads the way with an index score of 83. The Federal Labor Relations Authority was second with a score of 77 and the Overseas Private Investment Corporation was third with 75.Those numbers are outliers though, with many agencies’ scores being much lower. To get an idea of how a specific agency ranks, you’ll want to look at their specific scores on these issues and compare it to the average across government. For your reference, here are the average percentages of positive results across the past four years, for each category: 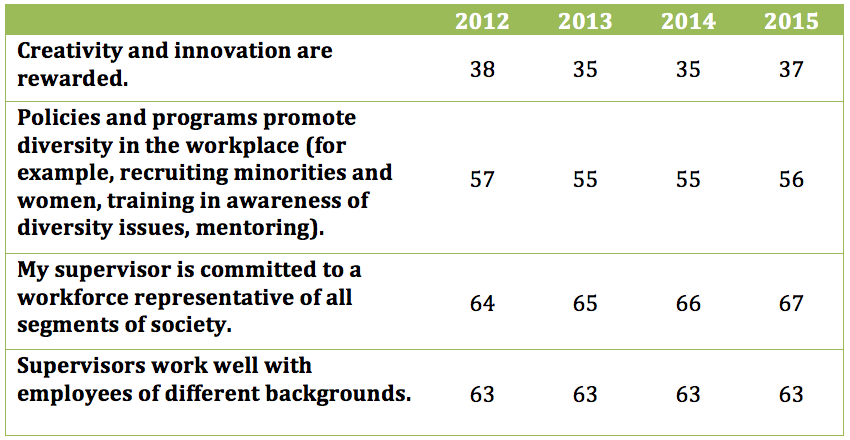 Best Places to Work actually uses raw FEVS data but in a different, more accessible way. Run by the Partnership of Public Service, this survey measures over employee satisfaction and commitment at federal agencies, as well 10 specific workplace issues including work-life balance and support for diversity.

Those specific categories are a treasure trove of information regarding agency culture and opportunity. To give you a quick glimpse of 2014 rankings, NASA polled highest for “Support for Diversity” among large agencies, GAO lead the way for mid-size agencies, and the Peace Corps was first among small agencies.

However, like I said before, you really want to compare and contrast agencies rather than only looking at the leaders or macro-trends. Luckily, PPS’s survey results are presented in an easily manipulated online format, allowing users to really dive into individual agency scores and create a side-by-side comparison of up to three agencies at once.

Even better, PPS breaks out their results by gender so you can see how satisfied females are at individual agencies – across all issues instead of just diversity or work-life balance. That’s a great indicator to consider, since it shows potential disparities between conceptions of diversity support and women’s satisfaction overall. For instance, if you take a look at 2014 results, you’ll notice that while GAO led the mid-size agencies in its support for diversity rankings, it dropped to eighth in overall satisfaction among women.

What that disparity tells you is that there are a number of indicators for how open and supporting individual agencies are to women. It also tells you that those indicators can vary dramatically. So as you do your research, consider what is most important to you and your career. Is it support for diversity, openness, or something else?

Then, the next time you’re considering a new agency, take the time to scrutinize the challenges or opportunities you might encounter as a woman in that particular part of government.

There’s No “I” in Federal Team