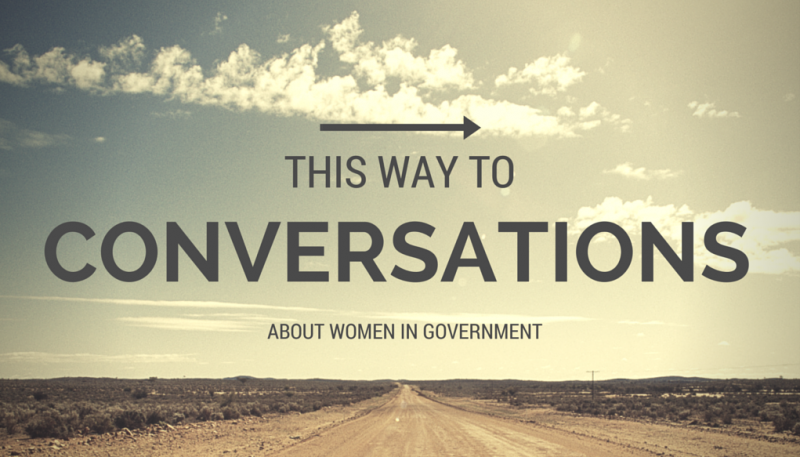 In a previous post, we discussed the importance of including men in conversations about women’s advancement in government. But let’s face it. That’s easier said than done.

Talking to men about women’s issues can be uncomfortable. You might meet ambivalence, resistance, or even outright disdain. Alternatively, you might just have no idea how to relate gender issues to someone outside of your own group.

Don’t worry. I get it. To help tackle this difficult conversation, here are four steps to frame a conversation and get more men involved in discussions about women’s rights and opportunities:

1. Explain the issue
The biggest barrier to engagement (for both men and women) is the belief that women don’t face unique challenges in the workplace. While many people do recognize the persistence of gender bias, others may not be exposed to it or simply don’t recognize it when it does occur. And because these individuals don’t see a problem, they are unlikely to work toward a solution.

Whenever possible, challenge this misperception with facts. Our recent post, 26 Stats about Women in Gov, offers some useful numbers that show a lack of representation and advancement for women in the public sector. Additionally, articles such as this recent New York Times piece can help explain how seemingly innocent workplace habits can actually be pervasive barriers to female advancement.

2. Describe how women’s advancement helps men
Once you’ve laid out the facts about gender bias, your next step is to explain why it matters for men. By relating women’s issues to men’s issues, you can offer male colleagues a more familiar frame of reference. You also offer a personal incentive for men to get involved in promotion of your goals.

So point out that, though the benefits for men may not be as obvious, providing women with equal opportunities in the workplace is advantageous for both sexes. For instance, ensuring women receive fair treatment at work can reduce the rate of employee turnover. As a result, both male and female colleagues have to invest less time in training new employees. The company at large also benefits from avoiding the financial costs of worker recruitment and replacement.

Other opportunities—things like decreased pressure for men to put work before family, and an infusion of new perspectives to challenging projects—are less tangible but nevertheless worth pointing out to male colleagues.

3. Frame men as partners, not opponents
At this point, you’ve laid out the issue and framed it in a way that your male colleagues can relate to. However, you still run the risk of alienating men from your cause if they feel like they’re framed as a barrier to women’s advancement. Mitigate that risk by focusing on solutions and furthermore impressing that your male colleagues are part of that solution.

The easiest way to do this is by using inclusive language to talk about next steps. Rather than explaining what you want to do to elevate female opportunities, talk about what we—you and your male colleagues—can do. Similarly, if you’re a man trying to get other men onboard with women’s advancement, ask your male colleagues how you can work together to make changes in the workplace.

4. Offer tactical solutions
Finally, once you’ve gotten your male colleagues onboard with your mission of eliminating gender bias, make sure you offer tactics for achieving your goals. This is a critical point because presenting a problem without offering solutions can actually decrease engagement on an issue by making the task seem insurmountable.

That being said, you don’t have to provide an intricate plan for helping women in the workplace (although, if you want to do that, please do!). Instead, point out a few small things that men can do to help. Examples of tactics include calling out gender bias when you see it, installing greater transparency in the hiring and promotion process, or even just committing to future conversations on women’s issues.

Advancing women’s opportunities and eliminating gender bias at work requires support from both male and female employees. Hopefully, these steps will help women frame conversations with men that increase their engagement in women’s issues and, ultimately, transform them into champions for the cause.

This article was originally posted in February 2015.

Are You Giving Good Feedback?