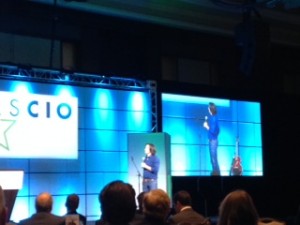 Here’s the thing about me, I am a sucker for a pull at your heart-strings type of story. Videos of soldiers coming home to surprise their families routinely reduces me to tears. So, I knew I needed to mentally prepared for the keynote address by Staff Sergeant Keni Thomas during NASCIO’s Annual Conference.

While I had anticipated a moving story of soldiers in a harrowing situation, I had no idea how valuable the leadership lessons would be for a group of government IT professionals.

A little background on Thomas. Back in the summer of 1993, Thomas was deployed to Mogadishu, Somalia, with the 3rd Ranger Battalion as part of an elite special operations package called Task Force Ranger. Their mission was to capture a criminal warlord named Mohammed Farrah Aideed. On the 3rd of October, Thomas and his fellow rangers were caught in an 18 hour fire-fight that would later be recounted in the movie Blackhawk Down. Nineteen Americans gave their lives and 78 were wounded in the worst combat seen by US troops since World War II.

During the hour long presentation, Thomas walked us through the harrowing 18 hours while dispensing his leadership lessons he discovered in the battlefield.

1. If you fail to make a great plan, you can plan on failing

The mission to capture Aideed came together quickly. Within ten minutes of confirming his location the Army had put together a plan to capture the suspect. Thomas went from having a relaxing day off, to being mission ready in a fraction of time, but he said training takes over in these seemingly chaotic situations.

“We do the planning in advance. We come up with what ifs, the contingencies and the contingencies for the contingencies.  When you are given a mission, you already have a plan in place. You implement your practice. You train as you fight and fight as you plan,” said Thomas. “You can’t phone in the practice. No coach has ever talked in a press conference about participation ribbons, they talk about how hard the team has practiced. How the team is ready to compete. Sometimes when a mission comes along you might only get a circle and square and you have to rely on your training to figure out the rest.”

2. Leadership is not about rank, it is about inspiring the people beside you

Every time a soldier goes up a rank they are sent to leadership training.

But Thomas discovered in those trainings that leadership has nothing to do with rank, “Leadership is about inspiring the person to your left and your right. In the military and in life there is no job that is not dependent upon someone else. If you have a weak player on your team that person is the single most important piece of the puzzle. Why? He has a job to do. You can’t do it all – if he is a weak the squad is a little bit weak – if the squad is weak don’t go out on a mission because it will inevitability fail. You have to train and empower your employees because it is the only way to succeed.”

When something goes wrong the natural tendency is to panic. When the Blackhawk went down in Mogadishu stranding more than 100 soldiers, Thomas admits he wanted to throw his hands up and say this isn’t my job, but true leaders do not let panic take over. ”

Panic makes you want to save yourself, but saving yourself leaves other people hanging,” said Thomas. “Leadership is a choice we make on a daily basis to do the right thing. You can’t stall and hope things work themselves out. You have to proactive. Leadership is a responsibility. It is your job to make sure that the people to your left and right get out, that they are protected.”

4. Believe in yourself and your team

During the battle, Thomas’ commander was injured. It was up to Thomas to assume not only a more senior leadership role in the midst of an ongoing conflict, but to instill in his men a faith in his capabilities.

“You need to remember, you didn’t get your job because you suck. You got the job because you have a set of skills that are needed to get the job done. You are exceptional at what you do or you wouldn’t in this position. You need to believe in yourself and trust your capabilities. If you don’t have faith in your decisions, no one else will,” said Thomas. “You can make your job easier by making sure your staff is trained and can follow SOP effectively. You can’t always be there to look over your employees shoulder, you have to trust them to do the job when you aren’t there.”

Thomas is the author of a new book, Get It On!: What It Means to Lead the Way.

Take care of your soldiers and they will take care of you! In the job and outside the job, this practice never fails. Great article and all so very true!! As a veteran myself I concur whole heartedly.

How right you are sir. As a Veteran I agree…the most important people are to your left and to your right. The proper training always helps and your team is only as strong as your weakest link.
HOOAH!

Great advice. Liked it very much.

I liked the article and forwarded to colleagues. One commented that the troops in the picture are most likely Ukrainian or Russians given their guns and uniforms. It would have been nice to have included US Army rangers or at least military. Great article though.

Good article. Shared it on my FB page.

Connected Government – Why it Matters & What You Can Do