In my journeys across the Web, I have observed a fascinating phenomena: Millennials and Gen X’ers aren’t the only ones embracing the power of social media and its potential to create “Government 2.0.”

If I had to estimate the average age of guests at virtual venues like GovLoop, Twitter, the blogosphere and beyond, most participants are people in their late 30s through mid-40s.

In case you’re wondering, here’s a quick breakdown of the generations in the workforce:

Earlier this week, I was posting a PowerPoint on the generations to SlideShare and saw this deck:

Generation C – a look into their world by Dan Pankraz
View SlideShare presentation or Upload your own. (tags: gen co-creation)

But it’s the following slide that really caught my attention: 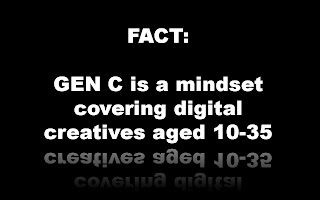 I think this definition is too limiting and would contend that Generation C represents someone of ANY age who is actively using social media and engages others on the Internet with a “2.0” mindset – creative, collaborative and community-oriented. (For a list of “68 Words Beginning with C” that describe social media, see this tag cloud posted by Ari Herzog.)

In delivering workshops and blogging about the intersection of the generations in the workforce, social media and government, I describe the difference between “Web 1.0” and “Web 2.0” in the following way:

Web 1.0 is like a store front where browsers can behold the wares, but the door to the store is locked. With Web 2.0, there is no store front. It’s an open market where people exchange and barter to gain better products and ideas.

Members of Generation C operate under this 2.0 mindset, creating marketplaces all over the Web to share and shape information and ideas.

For Boomers (who don’t want to admit that you’re getting old!), here’s your chance to consider yourself part of a “younger” generation. For the Millennials and Gen X’ers, it’s our turn to exercise leadership and create the agencies and organizations that we envision by building upon our aptitude with new media. For people of all ages, becoming a member of Generation C presents an opportunity to construct a bridge across the intergenerational divide and create a cohesive community that coalesces around a collection of common goals.

So if you are a member of Generation C (or wannabe), let’s get to work! How can we bring other people in our agencies and organizations into the fold, encouraging them to embrace the 2.0 mindset?

Young Government Leaders (YGL) is a professional organization of young men and women employed by the Federal Government. Its mission is to educate, inspire, and transform the Federal workforce and its membership consists of over more than 1,400 young Federal employees at more than 30 different departments and agencies located throughout the United States.

Oh my! I’m caught between GenX and GenC… but I think I’m more of a GenC now that I think about i.

That is the choice of all twixters, (and maybe us all:) Look back, look ahead, or even better, look around. For the right thing.

GovLoop Survey – Who Is Your Favorite Public Servant?

USAID Development 2.0 Challenge – THIS WEEK ONLY!