Officially speaking, Bob Bennett is an office of one. As the CIO of Kansas City, Missouri, there are no city employees who report to him all the time.

For the most part, he likes it that way —  that agility has empowered Kansas City to become one of the nation’s most technologically progressive cities. Take its 2.2-mile-long smart corridor, for example, which boasts public Wi-Fi, web-connected kiosks and a set of LED streetlights with sensors that can gauge both vehicular and human traffic.

Read on to learn more about the nuances of Bennett’s job as CIO and how Kansas City is steadily becoming a city of the future.

This interview has been edited lightly for clarity and concision.

GOVLOOP: We’ll start with the more general side of things. How would you describe your position as CIO of Kansas City to a friend? 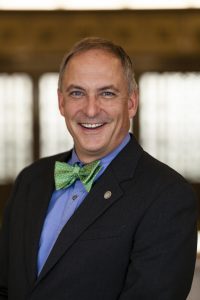 BENNETT: I guess I would say it’s a combination of three jobs rolled into one. The first of which is that I’m the convener of teams that span from the private sector to the public sector, in order to come up with solutions that take the best from both worlds. The second thing is I figure out ways to make technology work for people and not the other way around. And I guess the third thing is that I try to translate complex issues into sufficient detail that can be mathematized, so that my data folks can actually create models that let us know if we’re doing right or wrong.

GOVLOOP: Can you point to any specific examples in Kansas City where you’ve successfully helped to make technology work for people?

BENNETT: Yeah, potholes. This is probably about eight or nine months ago. We were sitting in the City Public Works Director’s office — me and my data scientist — trying to explain to the Public Works Director what we were trying to do to maintain her fleet of vehicles for snow removal. And it turned into this very deep conversation about maintenance rates.

She was growing visibly frustrated with the whole event, and then she just looked at the two of us and said, “Listen guys, I need something that actually I can translate into an action our citizens need. If you could tell me how I could predict potholes, that would change things.” And we kind of looked at each other and said, “If that’s what you want, that’s what we’ll give you.” About three weeks later we came up with a pothole predictor that allows us to now do preventative maintenance on the roads instead of waiting for a pothole to form, then answering the 311 call and fixing the legal claim against the city for the damage to the car, and then fixing the pothole itself. It changed the dynamic of that relationship with Public Works to the point where now they’re probably our most supportive of the 19 city departments.

GOVLOOP: From an operational perspective, who reports to you?

BENNETT: I’m literally an office of one when it comes to the reporting and administrative chain. I am a direct report to both the mayor and the city manager. I walk in the city manager’s office and say, “OK, I need a tiger team formed to go do Project X, because of the mayor’s Policy Incentive Y.” And then the city manager will put me in a tiger team, and for that very temporary period of time, while that tiger team exists, I’m able to provide direction. It’s almost always a multi-departmental team.

GOVLOOP: It sounds like that setup allows you to move fairly quickly. There doesn’t appear to be much structural bureaucracy to navigate.

BENNETT: It is a very true statement. And most of the time that’s a very positive thing. On occasion, I sometimes don’t know the pitfalls that I’m going to bump into.

GOVLOOP: Could you give an example?

BENNETT: My third day on the job was when the Smart City Challenge was issued by the Department of Transportation. So we put together a very small group, probably about 12 to 15 folks with whom we wrote our phase-one position to the DoT Smart City Challenge folks. We were very fortunate to come out as one of the seven finalists, and when we had to get into developing much deeper analysis and the actual operational plan to be executed as a part of our of our solution, I came to understand how complex the Kansas City government was. Because we don’t own our bus system — regional transit authority does that.

One of the elements included some job retraining programs and an innovation center, in collaboration with the state. By the time we were done I had 255 people on the planning team. I’m really proud of what we came up with, and even more proud of the fact that here we are 18 months after having submitted that particular product, and a good number of our proposals have actually been deployed in the city. I know we came up with some really good stuff, and despite not getting the federal funding to do it, we found other ways. That was probably when the light went on that this is a much more complex undertaking than I had anticipated when we were at first-phase concepts.

GOVLOOP: So what would you consider the greatest modernization accomplishment in your tenure so far?

BENNETT: I think it’s the success we’ve had with our connected corridor in the heart of downtown. What we did differently than a lot of our peers in the smart city community was we threw all of the technology solutions into one corridor. And we made the data analysis the heart of what we were doing, with a focus on the support those data analysis platforms gave to the mayor and the manager to make better decisions. It’s the way we harnessed the technology, getting back to what we first started talking about, instead of playing with the technology for the technology’s sake.

Did you like this Q&A? Check out some of our previous articles in the series, including conversations with FEMA CIO Adrian Gardner, HRSA CIO Adriane Burton and former VA CIO LaVerne Council.