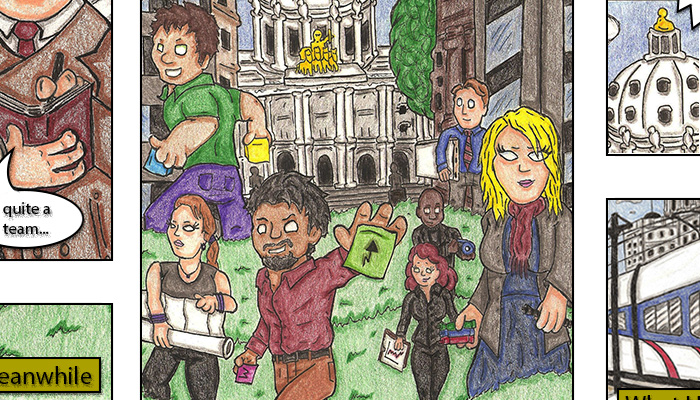 “You think you’re the only superhero in the world? … You’ve become part of a bigger universe, you just don’t know it yet.”

So said Nick Fury to Tony Stark in 2008’s Iron Man, in a moment that would change comic book movies forever. This small, post-credits cameo may have seemed insignificant to many at the time, but it was the first stone laid on the road to The Avengers four years later and to Captain America: Civil War later this week. While our heroes may be sparring in this latest outing, the cinematic comic book universe they’ve created provides ample inspiration for how we can assemble the forces of good in our efforts to improve and redefine the work of government.

When I first began my career in state government, I heard a lot about how we were hindered by a culture that tended to “work in silos.” As a newbie, it was hard for me to contextualize what this really meant and why it mattered (outside of the Department of Agriculture anyway). Over time, I came to appreciate what these organizational silos were all about, and comic book movies became one way I could communicate among my colleagues why they mattered and how to overcome them.

In your work for government, you’ve likely encountered numerous problems that need solving. And perhaps you’ve had opportunities to dive in and tackle them. But you are not alone and the problems are not unique. Chances are that in another government office near or far, someone else was facing a very similar problem and devising how they could solve it. Sure, sometimes we reach out and talk to one another – collaborating and sharing best practices – but too often we forge ahead on our own.

This siloed approach is akin to the world of comic book movies pre-Iron Man: still bearing plenty of super heroics, but isolated and aloof about the larger universe around them.

In Minnesota, we pride ourselves on a reputation of good government, but even we fall victim to this phenomenon. Scattered across Minnesota’s state agencies are many offices, programs, and teams committed in some fashion to supporting improvement, innovation, excellence, and the like. Furthermore, our agencies have utilized the support and resources coming from these disparate sources to complete improvement projects in numerous different areas – from human resources to information technology – but too often at an agency-specific level. All told, communication and coordination across agency lines can feel limited in the day-to-day work we do. And this is to say nothing of the lines of communication beyond state government – cutting across to our partners at the local and federal levels.

In the face of challenges like these, we needed our Nick Fury moment. We needed a reminder for our government heroes that they aren’t the only ones in the game, along with some encouragement to get involved in the larger universe.

In recent times, I’ve seen progress in that direction in Minnesota. Our governor has worked to gather the aforementioned offices, programs, and teams under a common umbrella, through sub-cabinets and staff dedicated to what he calls “Better Government.” Meanwhile, our Office of Continuous Improvement has worked to centralize data about improvement projects happening around the state to make sharing and collaboration easier. And via these methods, agencies have begun to embark on strategic, multi-agency improvement projects, working together to tackle hiring and onboarding processes, grant-making activities, and more at a statewide level.

The silos may still hamper us from time to time, but I believe we’ve begun to see what’s possible when we break out of them and work together. In that spirit, the comic book adventures of the Avengers remain a point of inspiration for me. Look no further than the intro text from the classic Avengers’ comics:

“And there came a day, a day unlike any other, when Earth’s mightiest heroes and heroines found themselves united against a common threat! On that day, the Avengers were born – to fight the foes no single super hero could withstand! Through the years, their roster has prospered, changing many times, but their glory has never been denied! Heed the call then – for now, the Avengers Assemble!”

In the world of government, we have many common threats to face. Though it may be possible to withstand them on our own, we make ourselves much mightier when we band together and tackle them as a team. So in the government office where you work, break the silos and sound the call for your colleagues. It’s time to “Assemble!”