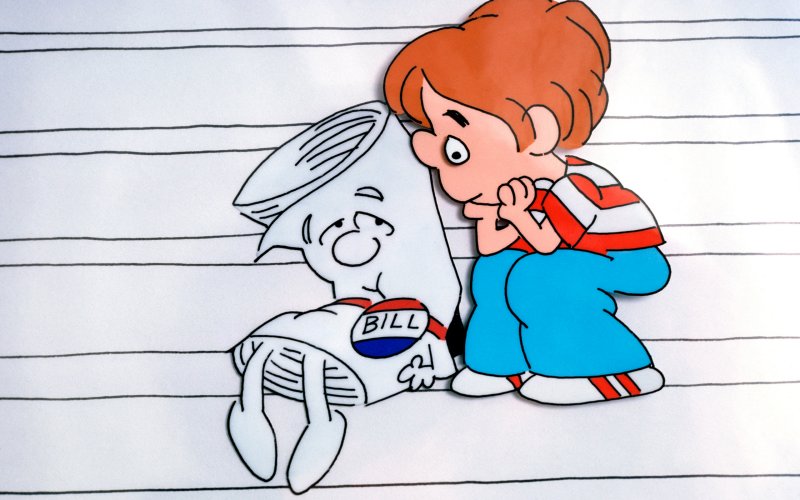 About one month ago, I took a weekend trip to Washington D.C. As I sat in the National Archives waiting my turn to view original copies of the Declaration of Independence, U.S. Constitution, and Bill of Rights, I overhead a gray-haired father talking to his kids about what the documents were all about. Meanwhile, next to him, a group of teenagers on a school field trip were having a similar discussion. The two conversations converged and become one on this point: the preamble of the Constitution as performed by Schoolhouse Rock. I listened as together the gray-haired father and the teenage students recited in sing-song the lyrics of the old educational tune.

The moment was striking to me because it illustrated two points. First, it showed the enduring power of Schoolhouse Rock and the power of popular media to deliver messages that not only make us care, but also stick with us for a long time (sound familiar?). Second, it hinted that for all the things that have changed in the world of government over the years, how we teach people about government hasn’t really changed all that much.

I bring up this story as a springboard to explore that second point: how people learn about government. Those of us who work in government may not feel directly impacted by the world of civics teachers and government text books, but I’d argue they play an important, under appreciated role in our successes and challenges, big and small. Furthermore, I think the American civics course is overdue for an overhaul.

What Have We Learned?

Perhaps most telling is this: as a teenager trying to chart the course of my future, I learned how to follow presidential campaigns with fervor (and even volunteer for them before I was of voting age), but I didn’t learn how to interface with the government entities that served me and my community in any substantial way.

Now, your mileage may vary; maybe your experience was different from mine. But from my perspective this experience is indicative of a larger phenomenon: We too often cede important conversations about our government — from the classroom to the newsroom — to the world of politics. To many people, the two may seem interchangeable, but those of us who work in government know the distinction is incredibly important.

I believe letting this dynamic persist contributes to further myopia and misunderstanding about government and it enables continuing political dysfunction, gridlock, and bickering.

As government professionals – and government communicators in particular – we can play an important role in changing this dynamic and taking back the conversation. As Congressional and Presidential politics continue to devolve into a circus show and public attitudes about government continue to sink, we know of countless examples where government is improving, evolving, solving problems, and striving to make a positive impact.

We need to tell those stories. We need to get people engaged and involved in the good of government, rather than letting partisan rancor take our stage away. From a communications and cultural perspective, that won’t be an easy thing to do. But I think starting with the civics classroom and our government coursework can pave the way.

As my government career continues to evolve, this is an area where I hope to make a difference and will encourage my peers to join me.

As government professionals, we can build stronger relationships with students and teachers. As policy experts, we can explore how curriculum can be updated to better balance the worlds of governance and politics. And as citizens, we can remember to go beyond the broad strokes of Schoolhouse Rock and newspaper headlines when talking to our friends and family about government.

And should you be a visitor to Washington D.C., don’t forget to take even passing notice of some of the under appreciated, lesser known landmarks during your trip. Because 18F and the Consumer Financial Protection Bureau are as significant monuments to our 21st century government as the ol’ Constitution is.

I could not agree more. I work in State government as a trainer and I spent part of orientation training talking about the 3 branches of government. You would be amazed at the amount of adults who know little, or next to nothing about state and local government. Realistically, understanding how they have a great impact on your day-to-day life vs. the federal government is little known and not taught in schools.

Whether it’s a newsmedia website comments section, or a hobby forum with a “politics” subforum, I seem to spend half my time having to explain to very angry people how things really work. And I don’t mean “how they work” in some nudge-nudge-wink-wink way, but rather how the law dictates that they must work, who has what mandate and what authorities, etc.

Much of the public anger we see manifested in the current pre-election campaign seems, to me at least, prompted by misunderstandings about who is responsible for what, who can take care of what, the operational requirements, and all of the mechanics of how government operates and is required to operate.

That’s not to suggest there aren’t flaws in the system, or in the character of some individuals. But the outrage comes from people trying to make sense of things without having the conceptual tools, and grasp of government (civics), that will permit reasonable expectations. It’s like they’re using the wrong key, twisting it, and exclaiming in frustration “Why won’t this damn door OPEN!?”.

So yes, yes, and yes. More civics courses, please. Information technology will be changing in 6 months anyway, so don’t waste any more school teaching time on that. Spend it on something that *won’t* be changing soon, and that matters in everyone’s life: how their country functions.

Having taught both US Government and State and Local Government to college students and having worked in both state and local government I couldn’t agree more! Our students do need to learn the “rest of the story” about government. I am always amazed by the lack of understanding of how government truly works and am hopeful when the proverbial light bulb goes off for them and they realize that they can appreciate all of government and what it does for them.

Hi. How? How would individuals do this? For example, how does a parent of a school-age child do any more to change the way Government or Civics is taught? Please forgive me for being an ignoramus, but I am not aware of what in my power I can tap to bring about such change for anyone other than my own child. I, a state govt employee, can offer my own child my limited perspective, but that just perpetuates the problem of having a few individuals who are in some kind of know while the rest and majority of the populace goes about stumbling through politics with the chorus of some passé children’s song stuck in their heads. How do we bring about expansive change in this arena?

I do think it will require a broad culture change in how people view and interact with government, and that won’t be easy. I call out the classroom as one important space that advocates and policy-makers should pay attention to, but I think there are many other fronts as well.

Communications professionals in the government sector have a big role to play. Journalists and media professionals can help as well, by re-tooling the way they report on government. In the era of YouTube, I even think there’s an opportunity for new public information campaigns similar to Schoolhouse Rock! — i.e. short, fun, punchy videos that demystify government, for both kids and adults. I think that’s particularly important, because you can’t make people engage. It needs to be appealing and able to compete in the saturated modern information marketplace.

As for the individual level, I think you can advocate for many of these things. And don’t underestimate the impact that can be made by passing on this ethic to your kids, friends, and family. It’s gotta start somewhere!