Despite laws, like the Notification and Federal Employee Anti-discrimination and Retaliation (No FEAR) Act of 2002 established to provide a work environment free of discrimination and retaliation, far too many U.S. federal officials continue to treat America’s returning service men and women of color unfairly.   Black veterans often confront “race” discrimination in addition to military service-connected bias while working in the U.S. Federal government.

According to the latest U.S. Equal Employment Opportunity Commission (EEOC) report — race,  specifically  “Black / African American,” remains one of the top bases in complaint allegations filed. The following three (3) accounts disclose some distressing challenges Black veterans encounter after returning stateside to use their talents in the federal workplace.

Karl McDonald, a Marine Corps veteran, served in Iraq, Desert Storm and Operation Provide Comfort. For over 14 years, he worked as a contractor shift supervisor security until the Nuclear Regulatory Commission (NRC) terminated him after he filed an Equal Employment Opportunity (EEO) complaint. McDonald reported how a government official engaged in racial harassment and made racial remarks about African American contract guards.  The government official is reported as saying the following to Black employees: ”You guys should be used to dust dirt being from Africa. What’s up homie? Why you wearing those gold chains like P. Diddy?  If you fu#k with me I’ll come after you with everything I got.  I will crush your windpipe.”  U.S. Senator of Maryland  Barbara Mikulski requested an investigation into the racial harassment claims.  Results of the investigation substantiated that “inappropriate comments” had been made to McDonald and other African Americans.  Veteran McDonald has a pending  lawsuit in U.S. District Court (McDonald v Simpler).

Dennis Turner, a military veteran, served as a Correctional/Youth/Clinical Security Officer at the U.S. Department of Justice’s Bureau of Prisons until he retired in 2008.  Before retiring with 26 years of federal service, Turner filed a class-action complaint against the Bureau of Prisons alleging widespread retaliation and race discrimination. The EEOC certified the class complaint in September 2010.  Dennis Turner et. al vs Michael Mukasey Case EEOC 541-2008-00255X.  The EEOC’s November 2010 evaluation disclosed that the Bureau of Prisons had an “unusually large number of complaints alleging retaliation.”

J. Gregory Richardson, a Lieutenant Commander in the Navy (Retired), says Customs Border Patrol (CBP) fired him from federal service on March 8, 2014, and failed to comply with 38 USC 4312, which covers reemployment rights of persons who serve in the uniformed services.  The highly decorated officer, whose heroic actions led to the capture of terrorists, reports that he has been a victim of reprisal since filing an earlier EEO complaint against CBP’s former head of internal affairs. 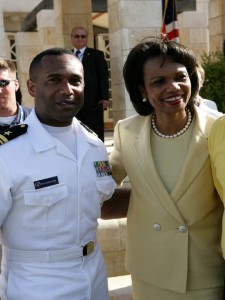 Richardson, a whistleblower who has filed a report with the Office of Special Counsel about abuses within the Customs agency,  says he has been forced into five separate legal actions and burdened with thousands of dollars in debt all because CBP officials engaged in racially discriminatory actions against him and repeatedly ignored his status as a disabled  veteran.   Open Case(s): OSC DP-13-0024; M​erit Systems Protection Board (DC-4324-13-0472-I-1) and EEOC (HS-CBP-00135-2013)

Brave men and women of our military have dedicated their abilities and put their very lives on the line to defend the freedoms that all Americans enjoy.  America needs to do a better job at supporting our returning military who fight for our country.  They should never have to return stateside to face racial harassment or fight discrimination in the federal workplace.